The offshore Chinese yuan slipped to its weakest position in almost a month earlier this week, as concerns surrounding the ongoing situation with China's leading property developer, Evergrande, began reverberating around financial markets.

Evergrande, one of the largest real estate companies in China, has racked up debts of more than $300 billion, and has warned investors in recent weeks that it was experiencing cash flow issues and could default on its massive liabilities. There is an argument to be made that the company’s deviation from its core business model is to blame for its failures, although its pending downfall may be more symptomatic of China’s attitude towards debt than anything else. Either way, the company’s perilous financial predicament has triggered jitters among market participants that contagion within the Chinese real estate sector and economy, or even a ‘Lehman-style’ collapse, could be on the cards in the not too distant future.

Despite the recent media hysteria, we are of the view that the aforementioned concerns are overblown and believe that the fallout from an Evergrande collapse would be relatively contained. Of the company’s $300bn worth of debt (which itself is the equivalent of just 2% of China’s GDP), only a relatively small portion (around 30%) are financial market liabilities, with a little over 11% (approximately $35 billion) loans from Chinese banks. For perspective, the latter only accounts for 0.12% of the total loans in China’s banking system, which stand at over $30 trillion. This suggests that the broader repercussions for the sector will likely be minor, even under a worst case scenario where the company was to default on most of its liabilities with a negligible chance of debt recovery.

By almost all accounts, Evergrande’s financial model also appears to be considerably less sustainable than its peers. Due to the highly cyclical nature of China’s real estate market, the government introduced a new ‘three red lines’ policy last year designed to ensure low liability-to-asset and net gearing ratios and a cash-to-short-term debt ratio of more than 1. As of April this year, almost half of China’s 66 major developers met all three requirements, up considerably from December last year (21%). Evergrande, on the other hand, has breached all three.

These worst case scenarios also assume that Chinese authorities take no action in order to soften the blow to markets and the domestic economy. We think that a bailout by Beijing is unlikely, but think that the government will help to manage the collapse by restructuring the company’s debt - there have even been suggestions that Evergrande could be nationalised in order to contain the disruption. Either way, we don’t expect authorities to stand idly by should the company’s collapse threaten the overall health of the Chinese financial system.

How have financial markets reacted so far?

As is often the case, we have seen a lot of doom and gloom headlines, and yet the reaction in financial markets has been rather limited. In FX, risk currencies experienced a modest sell- off on Monday, although these moves were, almost without exception, relatively minor. Even the Chinese yuan, which continues to exhibit the limited levels of volatility that one would attribute to a major G10 currency, has fallen by only around half a percent in the offshore market versus the US dollar since Friday close (Figure 1). 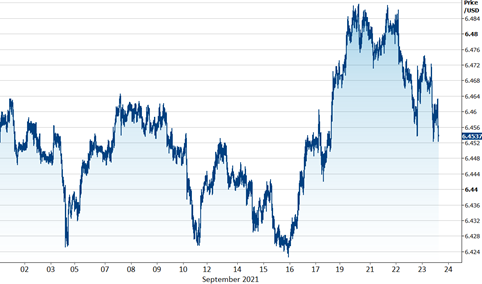 The reaction in stock markets has been slightly more noteworthy, although even the sell- offs experienced there have been comparatively modest and far from the magnitude that would denote panic selling. The Shanghai Composite index is down only around 2.5% from last week’s six-year highs and is still trading comfortably higher month-to-date, albeit the closure of Chinese markets on Monday and Tuesday may have limited losses. Hong Kong’s Hang Seng index, for instance, has experienced a larger sell-off, falling by around 4% during Asian trading on Monday to its weakest position since October. It's worth noting, however, that this index had already been selling off rather aggressively since February. 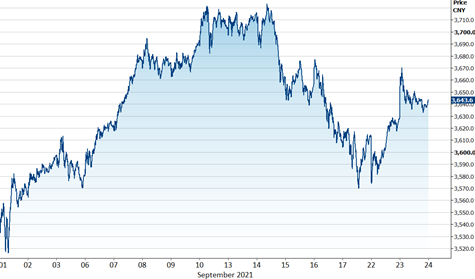 Overall, we think that a potential collapse of Evergrande poses a non-negligible risk to financial markets and the yuan, although the actual fallout will likely be limited. While we think that there will undoubtedly be knock-on effects within the real estate sector, the Chinese banking system is large enough and appears resilient enough to withstand the fallout. In our view, the main risk to growth from the Evergrande saga comes from a slowdown in investment in real estate projects in the upcoming six to twelve months or so. It is perhaps slightly too soon to gauge the magnitude of the potential drag on activity, but we expect it to be relatively minor and think that we’re unlikely to see any negative impact of note on consumer spending. The latter has already shown signs of softening, and we would expect any additional weakness there to be driven more by pandemic disruptions.

We continue to hold our bullish view on the Chinese yuan against the US dollar over our forecast horizon, and note that the People’s Bank of China has plenty of tools at its disposal, including ample FX reserves, to allay any future sell-offs, should it deems it as appropriate. That being said, we will be monitoring the Evergrande situation closely for any signs of increased risk of contagion.

EUR/USD picks up bids to 1.1642, keeping the two-day advances intact during the early Asian session on Monday. The currency major pair stays firmer above 10-day and 21-day EMAs amid bullish MACD signals. August month’s low adds to the upside filters.

The price of gold has been supported by a dynamic weekly/daily trendline where bulls consolidated and finally made a break for the upside in the latter part of the week. The price move into the $1,800s but has failed to take out the weekly trendline resistant, so far.