After the recent taper fever, the Fed may fall out of the limelight next week as other central banks take centre stage. The European Central Bank, Bank of Canada and Reserve Bank of Australia will hold their policy meetings. While a hawkish tilt is possible with the first two, the latter may lean in the opposite direction. With not a lot happening on the data front, the tapering timelines of each central bank look set to dominate the market theme as September gets into full swing. But as expectations of an early Fed taper ease, will the US dollar continue its downslide or has the pullback gone far enough?

RBA taper plans on the line

The RBA will kick off next week’s policy gatherings on Tuesday and its decision is probably the least predictable out of the three. Back in August, the RBA stuck to its tapering plans despite soaring Delta infections and expanding lockdowns in Australia. Policymakers are unlikely to make a last-minute U-turn on reducing the pace of bond purchases in September from A$5 to A$4 billion a week. However, they may hint at a delay to the next review, which is penciled for November. 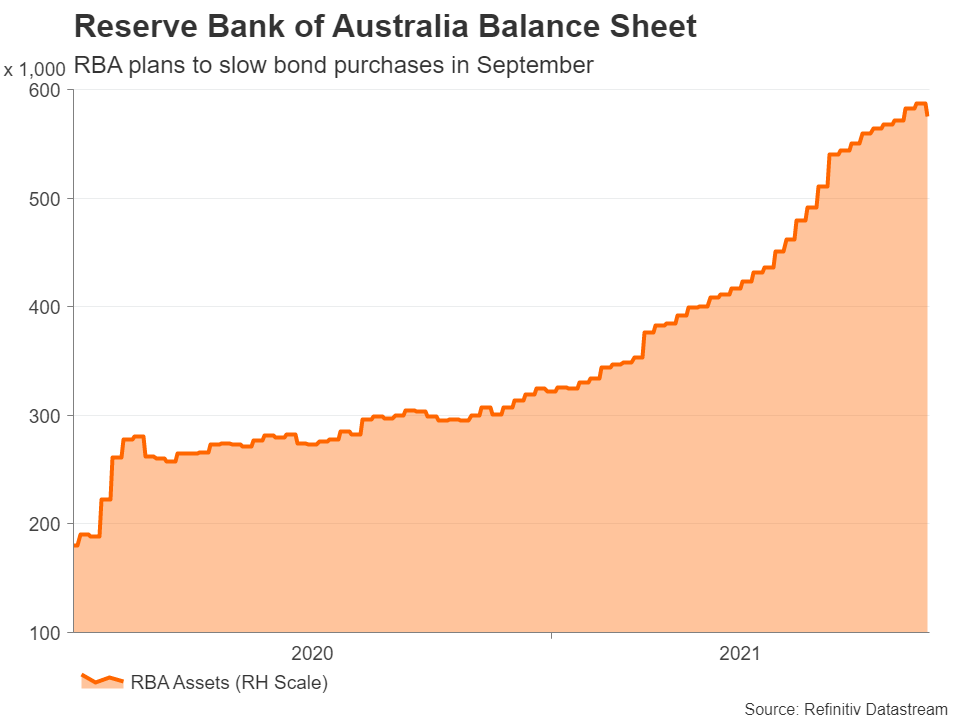 Stronger-than-expected GDP growth in the second quarter and record exports in July have somewhat lowered the odds of the RBA dialing back on its plans. Another reason why policymakers may prefer not to overreact to the worsening virus picture just yet is that Australia’s vaccine rollout has accelerated lately, raising optimism that the regional lockdowns could end soon.

However, the country is far from being out of the woods as the virus surge is showing no sign of peaking and it could be a while before restrictions are eased, meaning a deep contraction in Q3 GDP may be unavoidable.

Looking at the Australian dollar’s performance over the past couple of weeks, investors appear to have become less gloomy about the outlook. And although the aussie’s revival is mostly to do with a weaker US dollar, most analysts see the RBA slowing its tapering process over a longer duration rather than postponing or even reversing it.

As investors cheer the shift towards a more patient approach by some central banks in withdrawing their pandemic era stimulus, Chinese trade data might inject a fresh dose of doubt into the outlook on Tuesday. Fears that China’s recovery has lost considerable steam has been another weight on the aussie lately but rising hopes that more fiscal stimulus is on the way has alleviated some of the concerns. 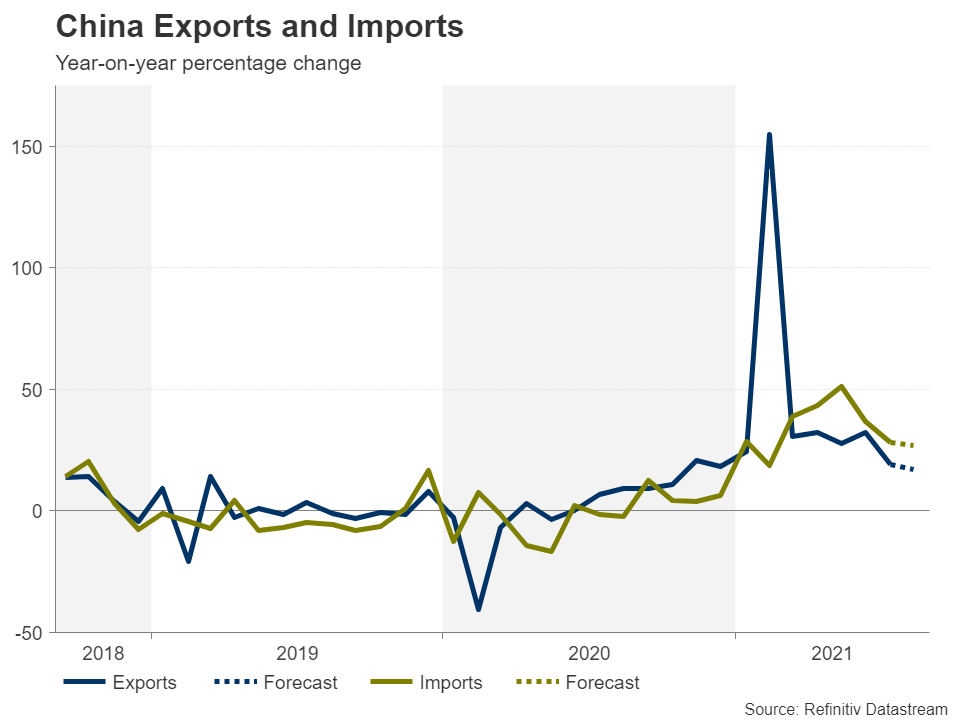 If exports rise by less than expected in August, it could put a cap on the China-sensitive aussie’s gains as well as take the shine off the recent rally in global stocks.

In addition to the trade figures, investors will also be keeping an eye on the consumer and producer price indices on Thursday out of China.

Bank of Canada to stand pat

The BoC’s meeting on Wednesday is almost certain to be a non-event as the Bank is unlikely to announce any policy changes ahead of federal elections in Canada on September 20. However, the spotlight was always on October as this is when the Bank next publishes its quarterly economic projections and when policymakers are therefore likely to next review the pace of QE.

That’s not to say, though, that there won’t be any surprises next week. The Canadian economy unexpectedly shrunk in the second quarter and although the country’s extremely high inoculation rate should protect it from the Delta variant, the economic fallout in other parts of the world could curtail Canada’s own recovery, particularly as the price of oil is hit. These setbacks might make policymakers have second thoughts about signaling another cut in their weekly bond purchases, which is widely expected in October. 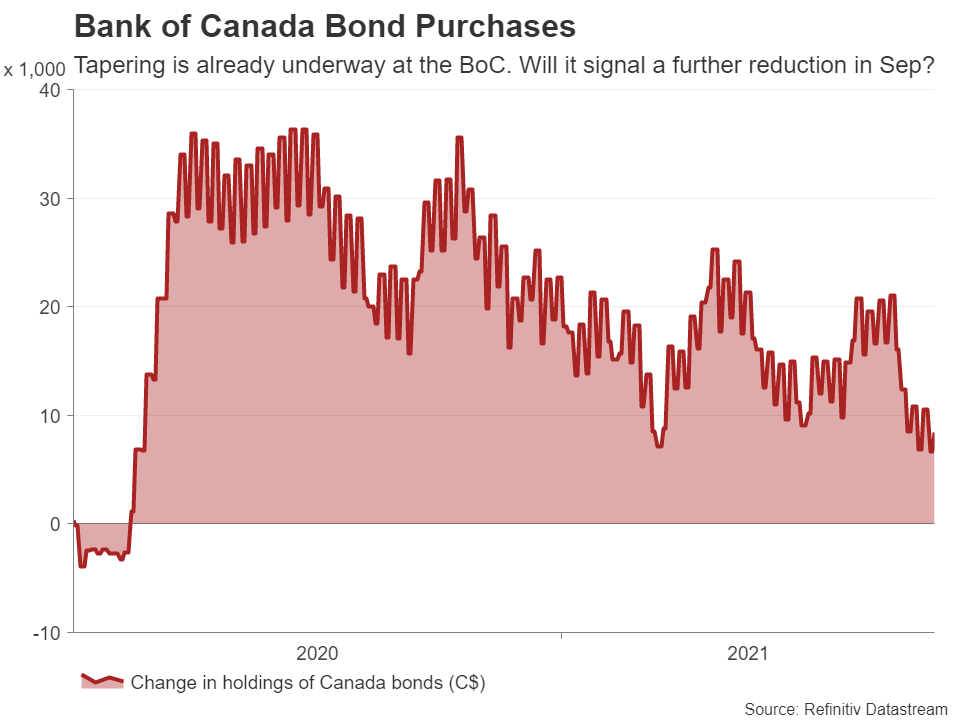 More clues about tapering in October could come from Friday’s employment report for August. The Canadian dollar has posted a tepid rebound versus the greenback after brushing an 8-month low on August 20. But its overall trajectory has been bearish since June. The absence of fresh taper hints by the BoC and soft Canadian jobs figures could reinforce that trajectory.

Last but not least, markets are bracing for the ECB’s decision on Thursday amid the hawkish voices getting louder lately. Despite some policymakers earlier playing down the prospect of a taper move in September, the signs are unmistakable – the ECB seems to be setting the stage for winding down its pandemic emergency purchase programme (PEPP). The start of tapering could be announced as early as next week. But how significant is this really for the markets?

The ECB’s PEPP programme was always set to end in March 2022 so it’s inevitable that the speed at which the purchases are being conducted has to scaled down at some point, especially as they’ve been running at a “significantly higher pace” since March. With the vaccination rate across the continent close to reaching the ranks of Britain and Canada and the Eurozone recovery on a more solid footing, some reduction next week shouldn’t come as that much of a surprise. 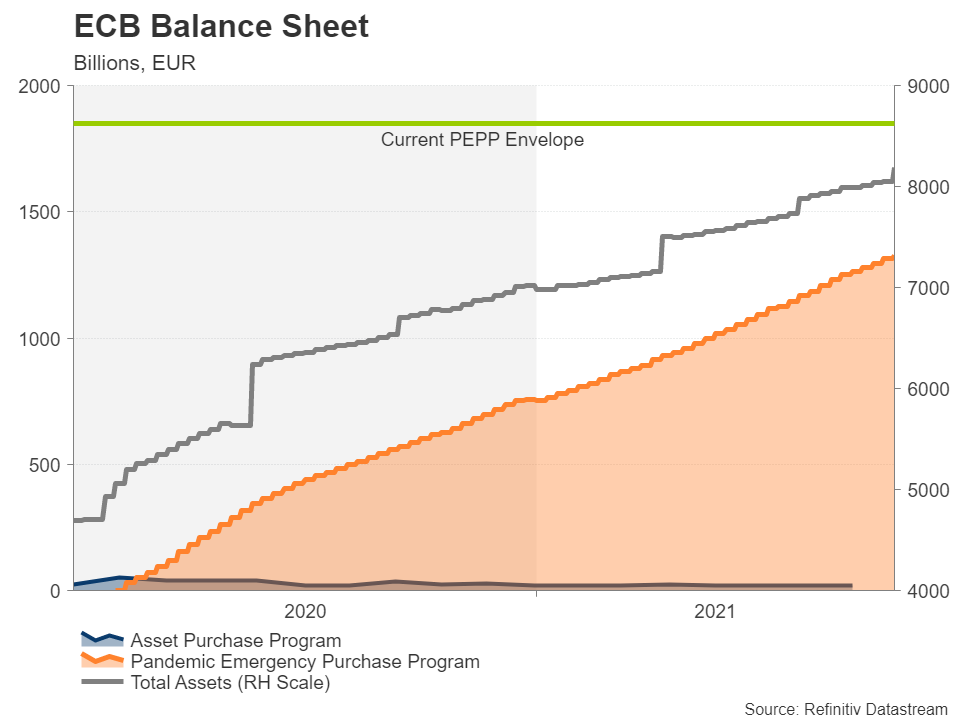 However, the tone that the ECB adopts will matter as there are a number of unanswered questions regarding QE, namely, will PEPP’s €1.85 trillion envelope be used in full and will the regular APP programme be bumped up once PEPP ends? Hence, there is plenty of scope for substantial hawkish turns over the next few months even though there’s no prospect of ECB stimulus stopping entirely anytime soon.

The euro could extend its recent gains versus the dollar if the ECB sets itself on the taper path, though traders will also be watching some key indicators out of the Eurozone’s biggest economy – Germany – for fresh clues about the growth momentum. Industrial orders for July are due on Monday followed by industrial production and the ZEW economic sentiment gauge on Tuesday, and trade numbers on Thursday.

Across the Channel, monthly readings on industrial production and trade will also be doing the rounds in the UK, along with the GDP estimate for July. The pound’s rebound against the dollar has been more modest compared to its rivals’ but it's doubtful how much of a boost next week’s data could provide if there are any upside surprises. Investors are increasingly uneasy about the UK government's overly lax approach in lifting all virus restrictions amid rising Covid hospitalizations in recent weeks, which keep creeping higher. 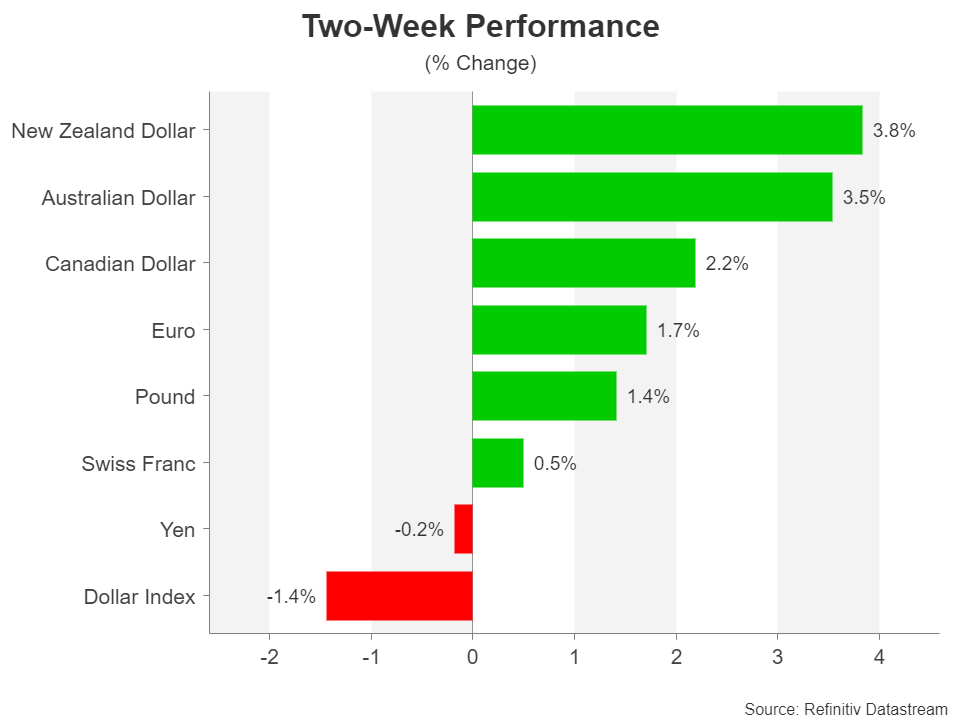 In the US, there will be even fewer drivers for the greenback in the aftermath of the August NFP report, though the latest JOLTS jobs openings on Wednesday and producer prices on Friday should attract some attention.