The economic calendar is relatively light next week, with the most crucial release being the euro area’s preliminary PMIs, which will reveal whether growth is headed for a contraction in Q4. In America, the minutes of the latest Fed meeting could add some color around the decision to hit ‘pause’ on rate cuts and clarify if the Fed intends to let the economy run hot. In the broader market, risk appetite will be driven by trade news, where the mood has soured lately.

The main event next week, at least in terms of the data, will be the preliminary Eurozone PMIs for November that are due on Friday. Forecasts point to an uptick in both the manufacturing and services indices, but even if those are met, such numbers would still point to stagnation in the euro area. In fact, the October surveys suggested that economic growth may even turn negative in Q4, given how weak the forward-looking data points were, so a substantial upside surprise now looks highly unlikely.

In other words, the upcoming data are likely to confirm that the euro area is barely growing. What’s most worrisome is that monetary policy is already at its limits, so more ECB stimulus will probably not do much to turn the situation around.

Germany may have dodged a technical recession, but with growth running near 0%, there’s not much to celebrate either. Rather, the fact that Germany avoided a minor downturn may even be ‘bad news’ for the entire bloc. It means that the pressure on Berlin to open the spending taps has eased, so any meaningful fiscal stimulus and thus a real recovery in the euro area are probably out of the question for the foreseeable future. Ergo, the dark clouds around the euro may be here to stay.

The ECB will also release the minutes of its latest meeting on Thursday but this is usually not a major market mover, especially for gatherings where nothing much happened, like this one.

In the States, the spotlight will fall on the minutes of the most recent Fed meeting that will hit markets on Wednesday. This was when the world’s most important central bank cut rates for a third time, but signaled that it will ‘pause’ its easing cycle until further notice, allowing that stimulus some time to work before considering whether to act again.

The upcoming minutes could shed some light on something Chairman Powell alluded to during his press conference – namely, that it would take a “really significant move up in inflation” before the Fed considers raising rates again. This triggered a notable market reaction back then, as investors saw it as a signal that the Fed is willing to let the economy to ‘run hot’, meaning it would tolerate a period of above-target inflation without raising rates.

If the minutes show there was widespread support for that, perhaps because policymakers want to re-anchor inflation expectations higher to avoid a Japan-like situation, then the dollar could come under some pressure. It would imply that rates can still be cut from here, but that the bar for raising them is extremely high.

That said, the overall outlook for the dollar remains favorable, mainly due to a lack of viable alternatives. For that to change, the Fed would either have to start slashing rates much more aggressively or Germany would need to announce a fiscal stimulus package to stimulate the euro area, neither of which is likely anytime soon.

Across the border in Canada, it’s a packed week, with manufacturing sales for September being released on Tuesday, before the inflation data for October on Wednesday. Bank of Canada (BoC) Governor Stephen Poloz speaks on Thursday, followed by the latest retail sales figures on Friday.

The loonie has been under distress lately, losing significant ground after the BoC unexpectedly adopted an easing bias, signaling that rates may be cut even despite a solid domestic economy, as ‘insurance’ against a worsening global outlook. Some disappointing labor market numbers since then amplified the case for an insurance cut, with markets now viewing the prospect of a cut in January as a coin toss.

Going forward, the risks surrounding the loonie still appear tilted to the downside. Even if incoming data remain solid, the BoC could still cut rates soon – the bar for such an action is pretty low because it doesn’t have much to do with the domestic economy. On the other hand, any weakness in incoming figures could convince the markets that a cut is coming. The bottom line is that the loonie may find it difficult to rally on good news, but could plunge on any bad news.

In Australia, the minutes of the most recent Reserve Bank of Australia (RBA) gathering will hit the markets early on Tuesday. Back then, the central bank kept rates unchanged, and indicated that it may be done with rate cuts for a while. The upcoming minutes will likely reflect this desire to take a break, but markets may view them as outdated, as employment data released since then were surprisingly weak. The RBA puts a lot of emphasis on the labor market, so investors are now pricing in a 50% chance for another cut in February. 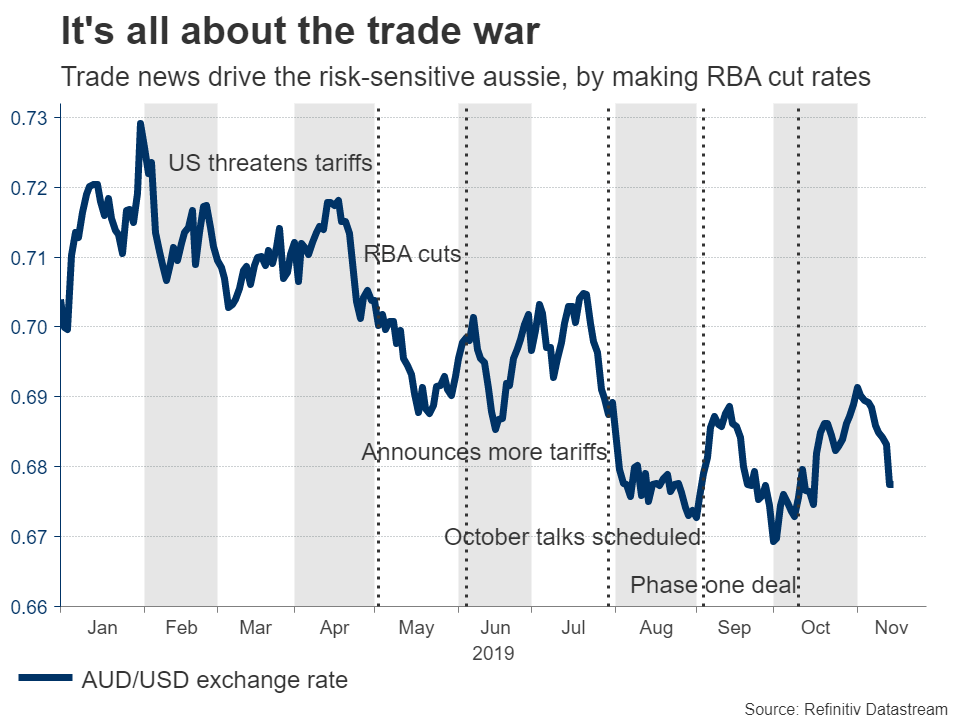 As for the aussie, the outlook depends almost entirely on the trade war, as that will also largely determine whether the RBA cuts again. The mood on trade has soured lately, with media increasingly reporting that the talks hit a wall amid disagreements over how quickly tariffs will be rolled back and how much agricultural product China will buy. The risk of a correction lower has therefore risen, as even a phase one deal is no longer ‘a sure thing’.

Ultimately, if the two sides can’t even agree on the simplest of issues – such as a timeline for removing tariffs and putting a dollar amount on farm purchases – who truly expects real progress on much more complex issues like intellectual property protection when, and if, we reach phase two?