Markets will go into high gear in the coming week as a jam-packed schedule looks sure to inject plenty of excitement before traders disappear for the festive period. The Federal Reserve will be headlining the week as speculation is rife about whether or not more stimulus is on the way. But there’s less uncertainty about the SNB, Bank of England and Bank of Japan meetings as a major shift in policy is not anticipated from any of them. Should central bankers fail to produce much firework, the preliminary PMI readings for December could set the tone for the remainder of the month. However, investors should also be on standby for any updates from the drawn-out US stimulus and Brexit negotiations, which may conclude in the coming days.

Can the Fed really do more?

A raging pandemic, a slowing recovery and stalemate over fiscal policy have been steadily piling pressure on the Fed post the election to pump additional stimulus into the US economy. However, whilst there have been the usual strong reassurances by policymakers that they stand ready to act if needed, there have been few signs that they would support increasing the pace of asset purchases above the current cap of $120 billion per month. 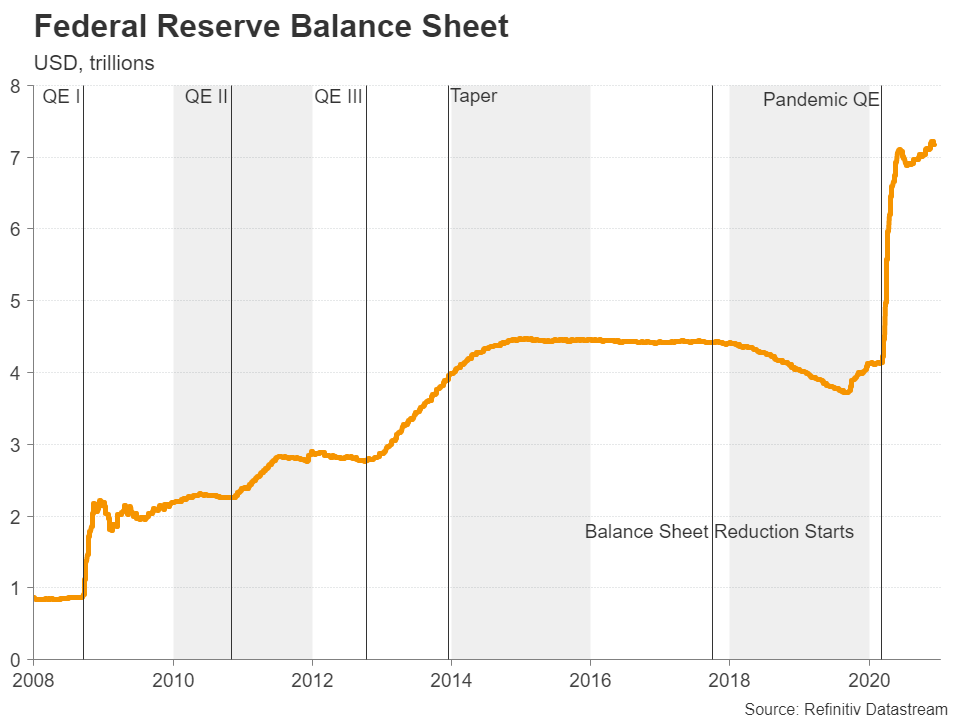 With talks in Congress on a new virus relief bill ongoing and an imminent change at the Treasury, which is about to be headed by former Fed Chair Janet Yellen, policymakers might prefer to wait a while longer before making a decision on whether to beef up their bond purchases. Instead, the Fed will likely extend some of its emergency lending facilities that are due to expire soon and possibly update its forward guidance.

The latter is what could set the markets on fire and torpedo the US dollar if Powell & Co. signal a prolonged duration of asset purchases with a shift towards longer-dated bonds. The greenback has already been under heavy selling pressure following the breakthrough of a vaccine for Covid-19 and a dovish forward guidance could be just as powerful as announcing an expanded bond buying plan.

With all eyes on the Fed, economic indicators out of the United States next week are unlikely to be particularly market moving. The Empire State manufacturing index for December will start the week’s data barrage on Tuesday along with industrial production numbers. On Wednesday, November retail sales and the flash PMIs from IHS Markit will keep traders preoccupied before the Fed’s decision later in the day. Building permits and housing starts will be watched on Thursday together with the Philly Fed manufacturing gauge.

Another central bank that is poised to keep the emergency lending facilities introduced at the onset of the pandemic beyond their original expiry date is the Bank of Japan. Like other countries, Japan is currently facing a new and even bigger wave of the virus outbreak so there’s little doubt that the BoJ’s emergency measures won’t be extended beyond March 2021. However, as far as other policies are concerned, there’s not a lot more the BoJ can do. Its negative interest rate policy has been a disaster and is "negative" in all but name as only a small portion of commercial banks’ reserves are currently subject to negative rates following several tweaks.

As for asset purchases, the Bank of Japan is now not only the largest holder of government bonds but is also the nation’s biggest owner of stocks through its ETF purchases and so there’s very little room for manoeuvre in this policy area. However, the BoJ may be off the hook now that a vaccine is in the picture, not to mention the Japanese government recently announcing yet more fiscal stimulus to boost the economy. 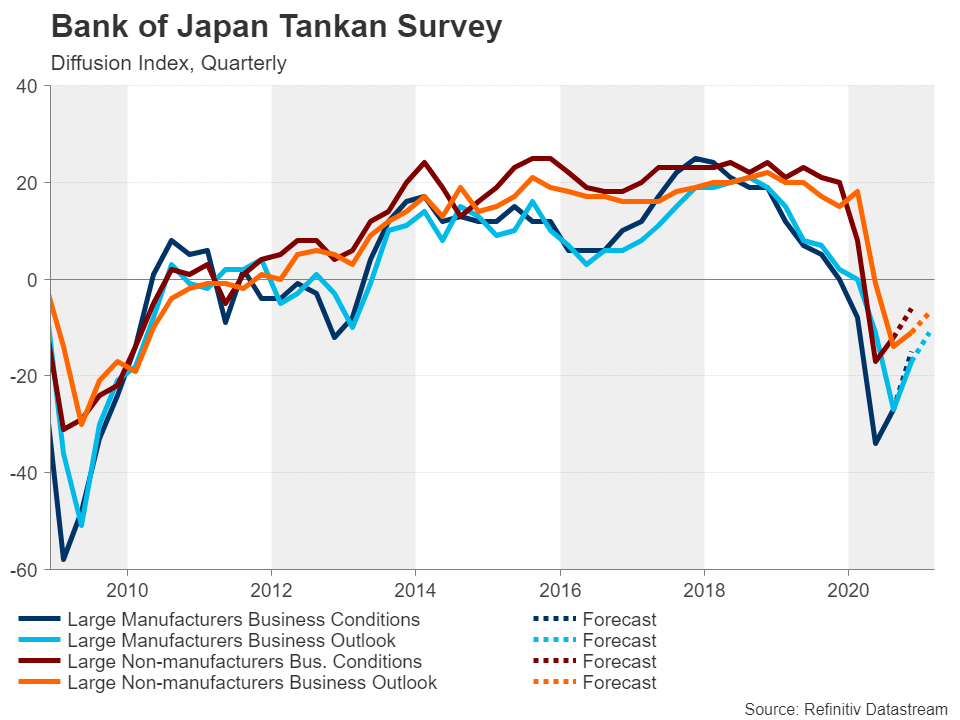 The quarterly Tankan survey due on Monday may point to optimism already on the rise among businesses, while the flash manufacturing PMI on Wednesday could show further improvement for the sector in December. November trade data are also out on Wednesday, and on Friday, CPI figures for the same month will precede the BoJ decision.

There will be no shortage of key risk events in the United Kingdom over the next seven days, as apart from the Bank of England’s policy meeting on Thursday, there are a slew of economic releases on the agenda. The latest jobs numbers are out first on Tuesday, followed by inflation figures and the flash PMIs for December on Wednesday, with retail sales wrapping things up on Friday. The flash PMI prints are likely to draw the most attention as they will provide a glimpse as to what extent business activity is bouncing back after England’s lockdown ended at the beginning of December. 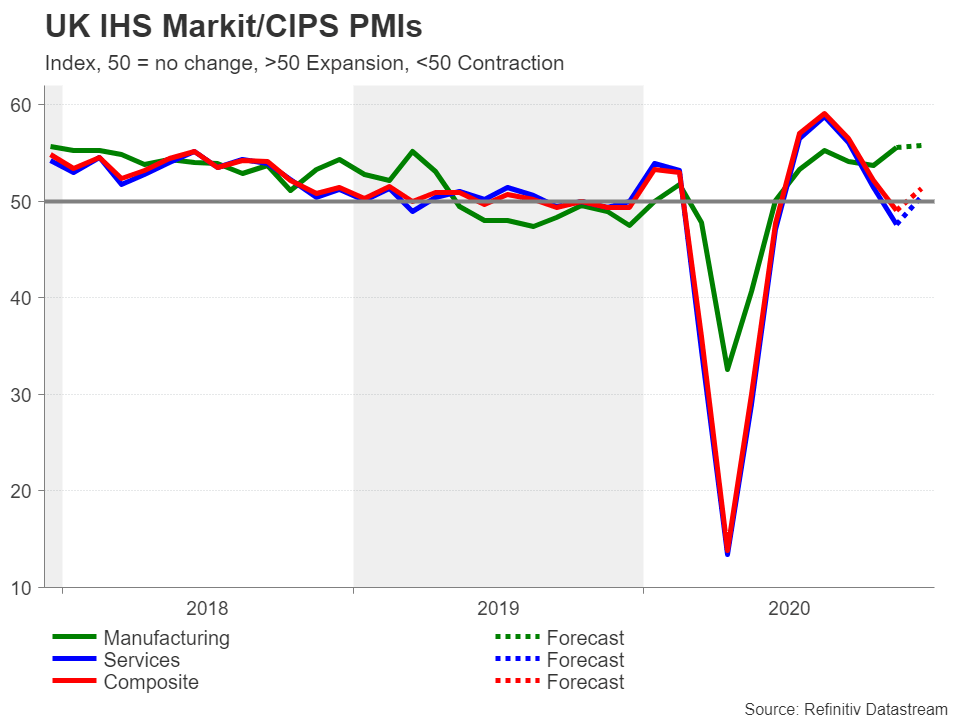 Policymakers may be tempted to strike a more dovish tone at Thursday’s policy meeting if the data are overwhelmingly weak, though, on the whole, the BoE is not expected to move again for at least another few months, having just boosted its QE programme back in November.

However, none of the above will be the focal point for the pound as Brexit talks limp on. UK Prime Minister Boris Johnson and European Commission President Ursula von der Leyen have agreed to continue negotiating at least until Sunday. If not enough progress is made till then, Johnson may decide to quit the talks and put Britain on the path of a chaotic exit from the European Union. The pound has so far appeared surprisingly resilient in the face of rising no-deal risks but could sink more substantially if such a scenario becomes reality.

Last but not least, the Swiss National Bank is the other major central bank that will hold its last policy meeting of the year next week. No change in policy is anticipated by the Bank on Thursday. But as we’ve come to expect from Chairman Thomas Jordan, his choice of words to describe the exchange rate will be watched very closely. 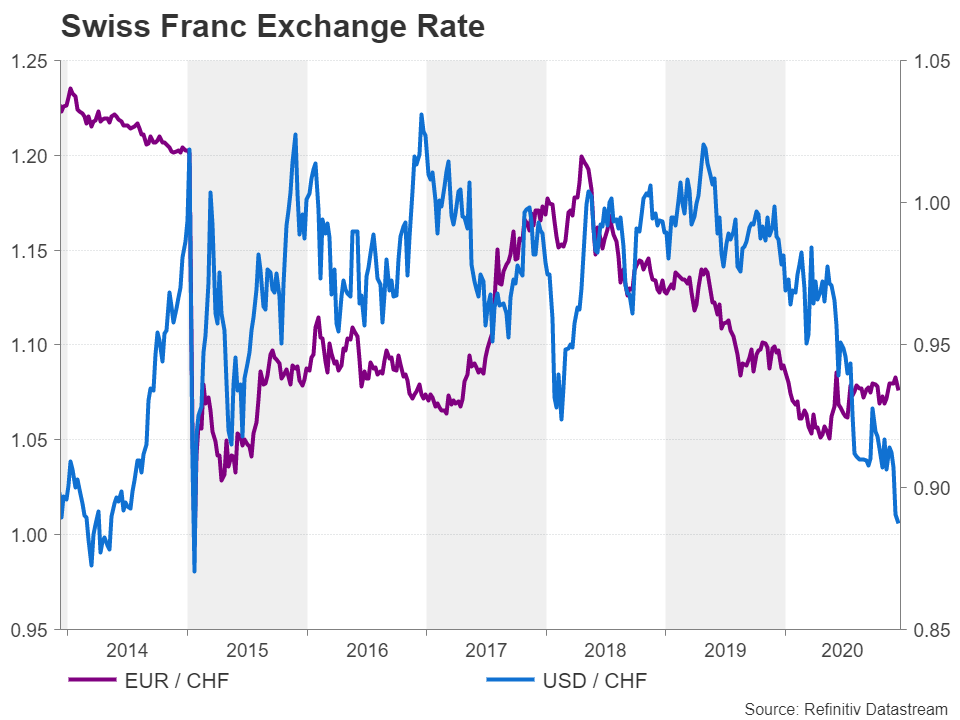 The Swiss franc appears to have steadied considerably against the euro, coming off and holding below the peaks seen in May when it reached five-year highs, as the single currency regains some strength. However, the SNB has a new headache now as the US dollar continues to plummet against the safe-haven franc, falling to the lowest since January 2015 in the past week. Although the dollar/franc exchange rate isn’t as important as the euro/franc rate, the scale of the greenback’s slide is significant and could warrant intervention by the central bank. The problem, though, here is that the US Treasury does not take too kindly to currency intervention and there could be repercussions for the SNB were it to decide to pursue such a policy.

As several European countries relax some of their virus restrictions following partial lockdowns in November, economic activity is expected to have recovered somewhat in the first half of December. The flash releases for the manufacturing, services and composite PMIs are all due on Wednesday and may provide the euro a slight lift if they point to improved conditions for businesses. 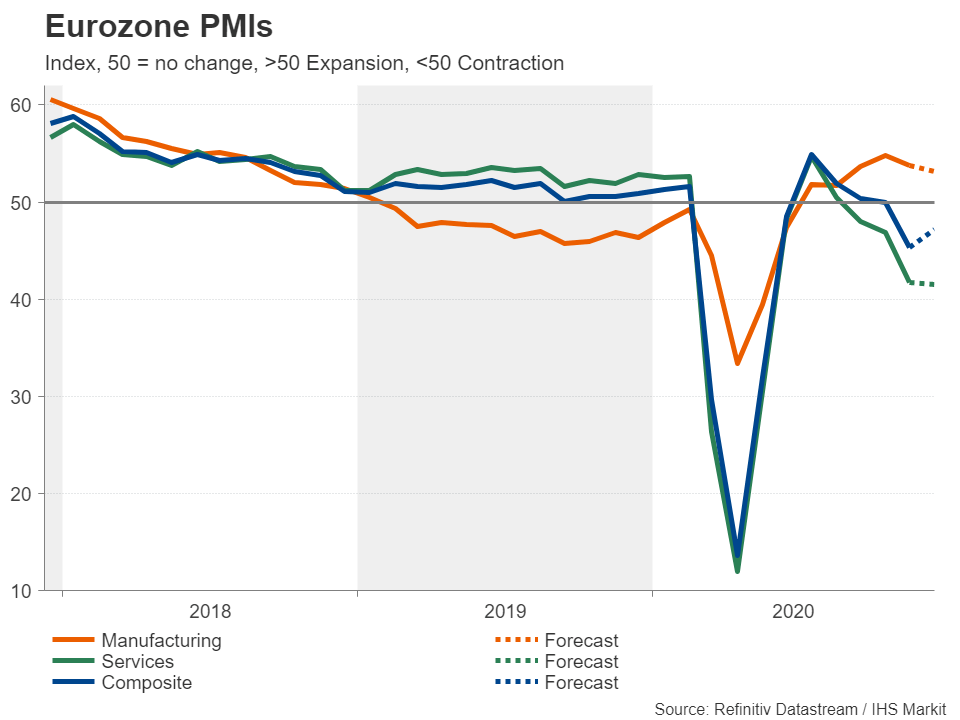 But even if the PMIs suggest the rebound was feeble, that may not be enough to spoil the euro’s bullish run as the future is bright after the European Central Bank just announced extra stimulus and EU leaders finally signed off on the virus rescue fund. A greater danger for the currency is a no-deal Brexit outcome or the US Congress failing to pass a fiscal stimulus package before it adjourns for the year as these would spur risk aversion, pushing the dollar higher.

Other notable data out of the euro area include the final inflation readings for November on Thursday and Germany’s Ifo business survey on Friday.

No stopping the aussie, kiwi and loonie

Brexit woes have dealt a bit of blow to the euro’s and sterling’s rallies but the Australian, New Zealand and Canadian dollars have maintained their uptrend as the overall mood in the markets has stayed positive. More specifically, commodity prices, such as those of copper, iron ore and crude oil, are surging on the back of the more optimistic global growth outlook for the second half of next year when vaccines are projected to reach the masses. 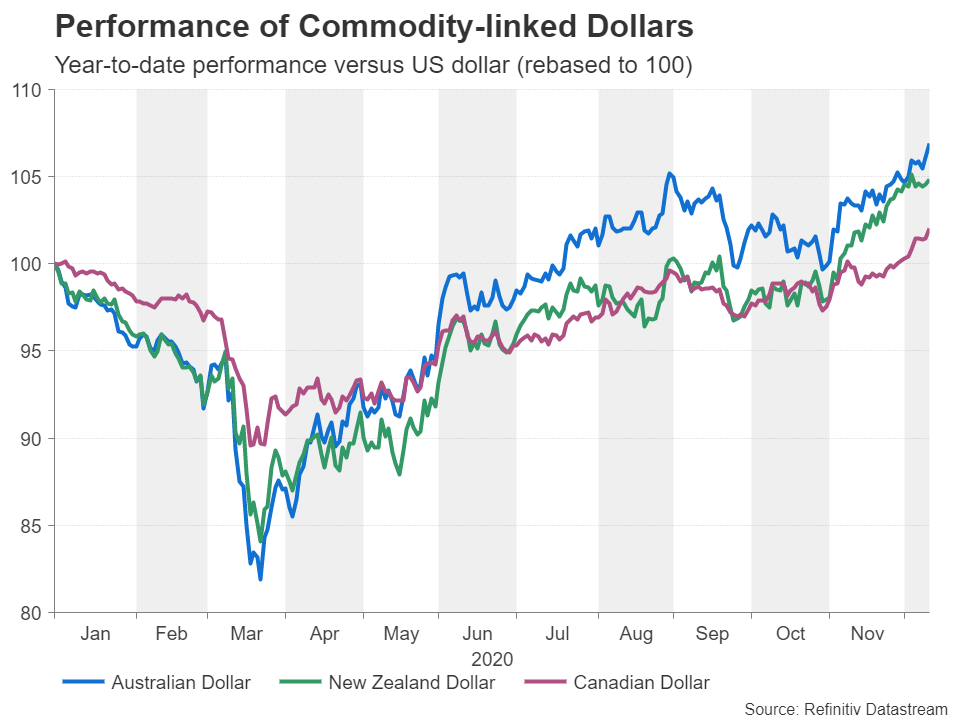 Hence, the prospect of further monetary easing in those countries is fading fast and the incoming data over the next few months probably won’t have much of a lasting impact on their respective currencies.

Still, short-term traders might want to keep an eye on Australia’s employment report on Thursday, Canada’s inflation and retail sales figures on Wednesday and Friday, respectively, and New Zealand’s third quarter GDP numbers on Thursday. In addition, the monthly prints on Chinese industrial output and retail sales on Tuesday may affect which way risk sentiment sways.