It’s NFP week and as investors battle the vaccine optimism against the short-term gloom, the latest jobs report from the United States may determine which way sentiment sways next. Canada will also publish jobs numbers along with its Q3 GDP print. The Reserve Bank of Australia, meanwhile, will kick off the December round of central bank meetings. In Europe, flash inflation figures will be watched in anticipation of the ECB’s next move. But amidst the busy economic calendar, it’s Brexit and an OPEC+ meeting that have the potential to produce the most volatility.

After the decisive policy action in November, the RBA is almost certain to hold its fire at the December meeting on Tuesday. There’s also little chance of policymakers significantly altering their outlook so soon even if next week’s data do point to a weak rebound in GDP from the record slump of Q2. The slash in the cash rate and expansion of asset purchases announced earlier this month were partly in response to Australia’s second wave. Hence, weak numbers are unlikely to cause much alarm at the Bank.

The slew of data will begin on Monday with private sector credit for October, followed on Tuesday by building approvals for the same month and net exports contribution for Q3. The third quarter GDP report is due Wednesday and wrapping up the week on Friday are October retail sales. 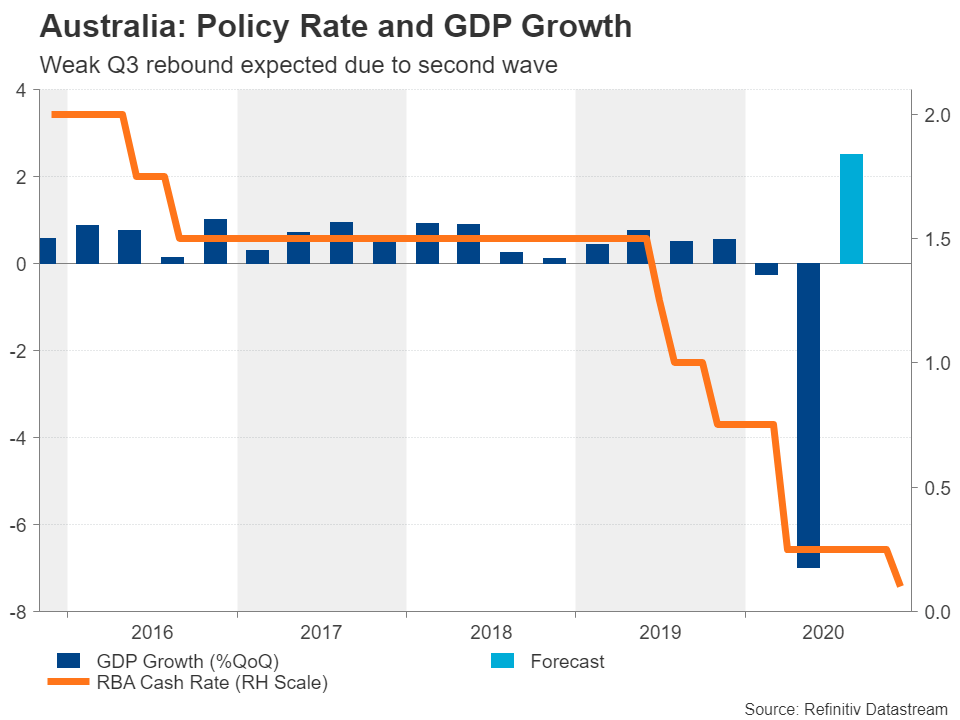 Having been struck by a second major Covid outbreak as early as September, Australia’s initial V-shaped looking recovery came to an abrupt end. But early indicators suggest the economic dip from the tightened virus curbs in September wasn’t as severe as in the Spring, with output bouncing back strongly in October.

Nevertheless, a disappointing set of figures might still weigh on the Australian dollar if they coincide with a darkening market mood, serving as a reminder of the long journey ahead towards normality. Aussie traders will also be keeping an eye on manufacturing PMIs out of China next week.

China’s official manufacturing and non-manufacturing PMIs are released on Monday, with the Caixin/Markit manufacturing PMI coming up on Tuesday. These have the capacity to lift market sentiment if they surprise to the upside. But given that risk assets are already riding high on the back of the positive vaccine news, any boost is likely to be restrained. The big test for the aussie, in particular, will be if it can stretch its gains beyond the $0.7375 resistance area.

Employment in focus as Canada succumbs to second wave

Canada will be another country reporting GDP figures (due Tuesday), though its recovery is expected to have been more solid than Australia’s in the third quarter. After a record 11.5% quarterly contraction in Q2, Canada’s economy is forecast to have bounced back by 10% in the three months to September. 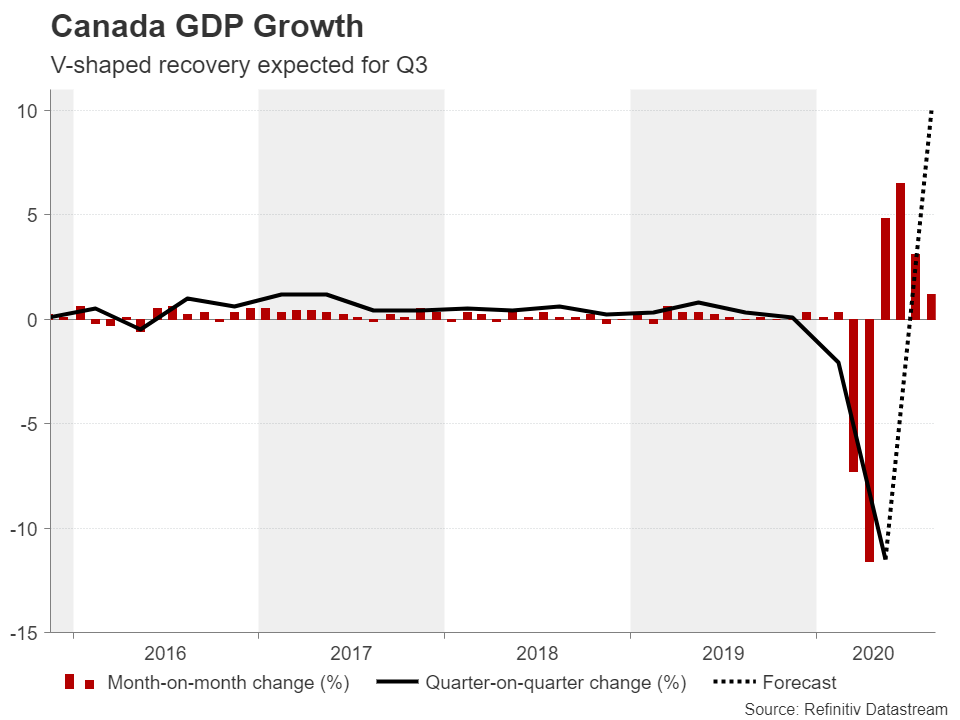 However, new coronavirus cases in Canada have been spiking higher since September and daily infections have now surpassed the peak from the first wave. As has been the case in Europe and some states in the US, restrictions across the country have been levelled up, with some cities like Toronto being placed under lockdown.

So much of the focus now is on the fourth quarter and Friday’s jobs report will be watched for any signs that the new virus curbs started to hurt the labour market in November. Poor employment numbers might prompt Bank of Canada policymakers to think twice before dialling down their quantitative easing program like they did in October. However, aside from some ‘recalibrations’, the BoC is largely expected to stay on hold for the foreseeable future so the Canadian dollar is likely to take its cues from broader risk appetite, as well as the outcome of the OPEC+ meeting.

Major oil producers will hold a two-day meeting on Monday and Tuesday to decide whether to extend the existing cuts of 7.7 million barrels per day into 2021. Expectations are high that OPEC and its non-OPEC allies will extend the output quotas by at least another three months, possibly by six months. However, after the vaccine breakthrough - which has not only considerably raised the demand outlook for oil but prices have already started to surge in anticipation - an extension of longer than three months might prove a bit of a push for some members. 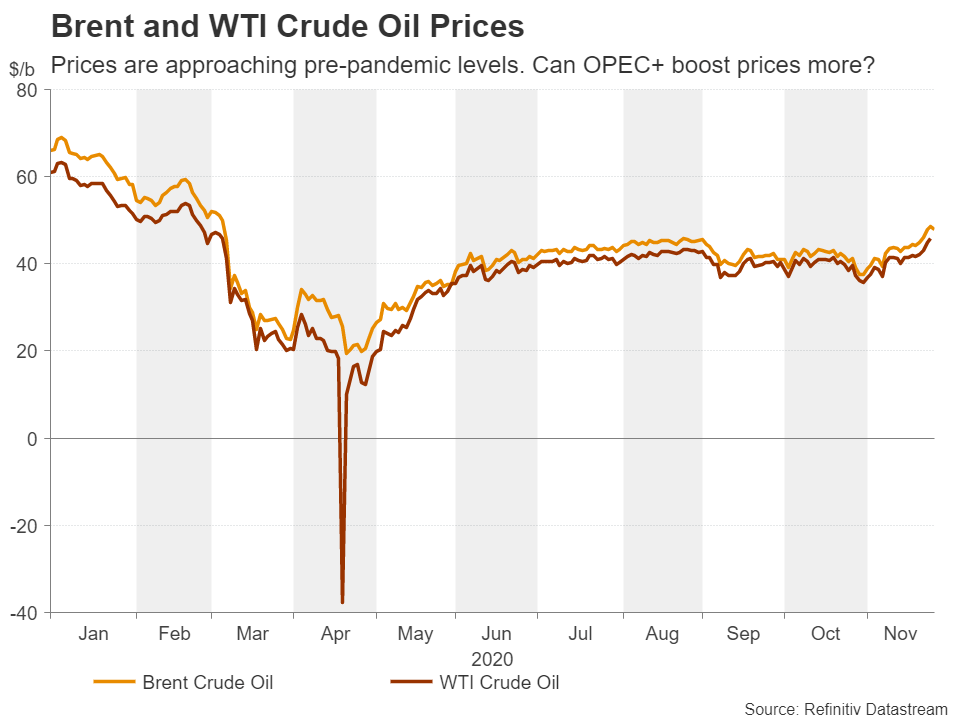 Several countries have gone along with the huge cuts quite reluctantly and some like Libya and Nigeria might not support further extensions unless they’re given exemptions. This poses a potential risk for oil prices next week as their almost one-month long rally would be vulnerable to a steep downside correction if OPEC+ fail to come to any agreement.

All eyes on NFP as Fed keeps markets in the dark

The message being broadcast by the Federal Reserve over the past few weeks has been pretty consistent: the economy needs continued monetary and fiscal support. However, the Fed has given little away in terms of how much additional help they think the economy needs now that virus cases in the US are spiralling out of control again and the Treasury has cut off funding for key emergency lending programs. There were some hints from the minutes of the November policy meeting that increasing the size of asset purchases could be on the cards, but investors’ best bet might be to sift through next week’s important data events.

Things will get off to a slow start on Monday with the Chicago PMI for November and pending home sales for October. But on Tuesday, the ISM manufacturing PMI will take centre stage. Investors will be watching to see if the index moderated in November from the near two-year high set in October. The ISM non-manufacturing PMI was equally strong in October, so any signs on Thursday that the services sector slowed in November might fuel expectations of Fed action next month.

The biggest highlight, however, will be Friday’s jobs numbers. Nonfarm payrolls are projected to have risen by 520k in November, down from 638k previously. The smaller gain means the unemployment rate is forecast to edge down by just 0.1 points to 6.8%. 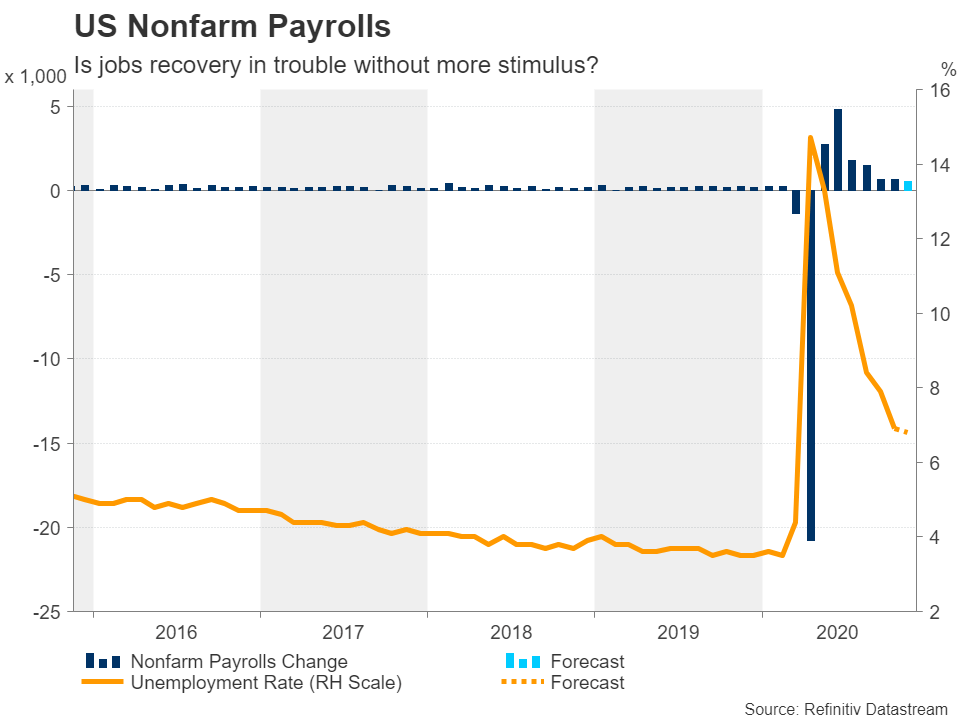 If the employment and jobless readings are much worse-than-expected, they could go some way in pricing in more Fed easing in December. The US dollar is fast approaching a 3-month low against a basket of currencies and those losses could intensify if the data point to looser monetary policy in the near-term.

The Fed isn’t the only central bank under increasing pressure to do more to bolster the recovery as the European Central Bank is also under the spotlight as its December 10 meeting approaches. But unlike the Fed, the ECB has been more forthcoming about signalling additional measures after large swathes of Europe were forced to enter tough restrictions in November. There is already a visible hit on the economy, with the services PMI plunging to the lowest since May in November’s preliminary estimate.

The final readings of the November PMIs are due on Tuesday (manufacturing) and Thursday (services). The other main release for the euro area is the flash inflation estimate, also on Tuesday. The Eurozone’s headline inflation rate is forecast to stay unchanged at -0.3% y/y in November. 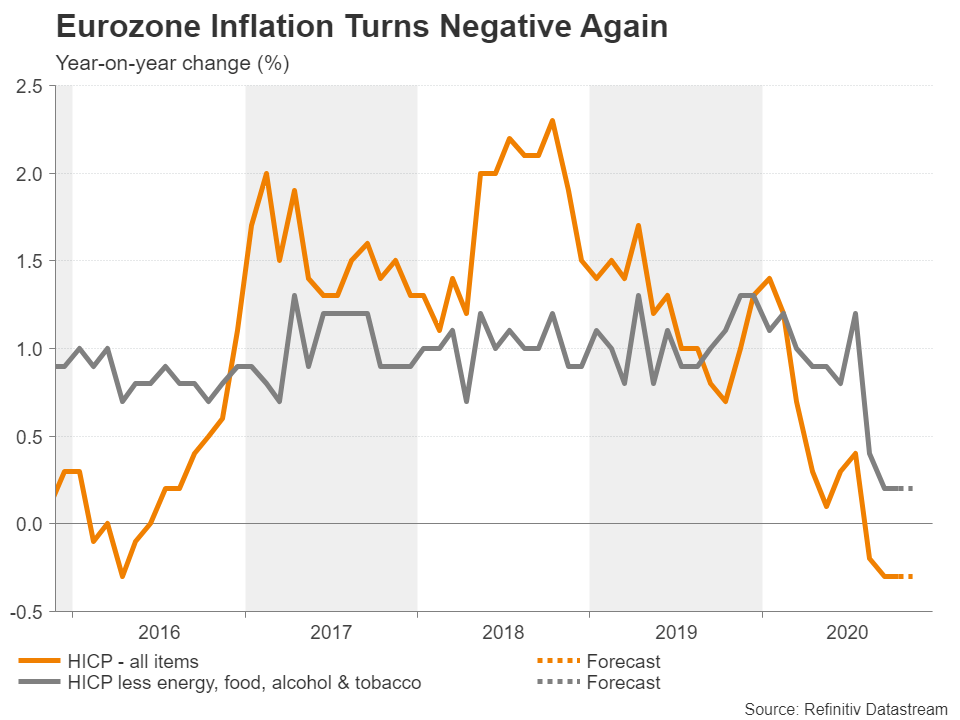 The build-up of negative price pressures from the virus crisis would be another reason for the ECB to beef up its pandemic response. Policymakers have been downplaying the growing deflationary risks but the longer it takes for inflation to rise comfortably back above 0%, the more difficult it will be for them to pretend they are not worried.

Another problem for the ECB is the appreciating euro, which just hit a 3-month high of $1.1940, not far from the $1.20 level that tends to trigger a red alert at the Bank. The euro has been gaining lately on the back of a softer US dollar even though the Eurozone economy is in much more dire straits than America’s. But unless there’s a major risk-off incident, it will be hard for the dollar to stage a comeback.

One such risk-off event could be sparked by a collapse in the Brexit talks. Negotiations between the UK and EU for a post-Brexit trade pact are ongoing and although the two sides have reportedly agreed on about 95% of the deal, the remaining 5% is what could make or break it. The outstanding issues have not changed; fisheries, level playing field and dispute resolution are the areas where compromises still need to be made.

But with less than five weeks before the transition period ends on December 31, time to find a solution to those differences is quickly running out. Monday is seen as the last realistic deadline if an agreement is to be approved on time, though the EU is looking at the possibility of implementing the deal provisionally and ratifying it later in 2021. 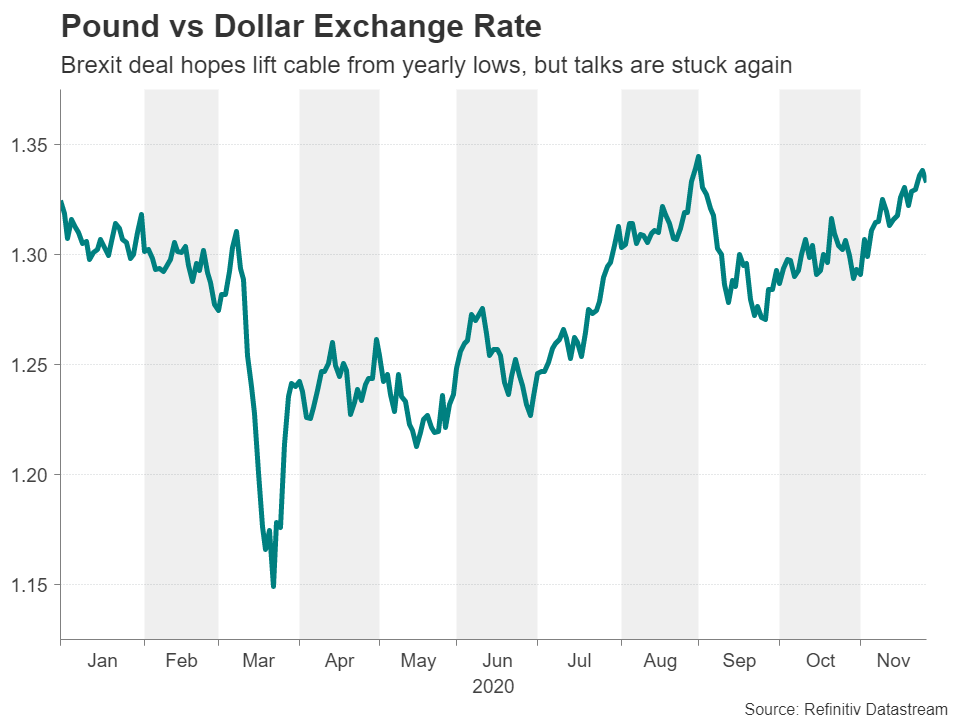 The pound has slipped on the uncertainty about where the final stage of the negotiations is headed. After rising sharply on hopes that a deal is within reach, cable could come crashing down if there’s no agreement in the coming week. Having said that, dollar weakness and hopes of a ‘temporary’ deal would likely limit any selloff in such a scenario.