The last of the major central bank meetings of 2019 will be the main highlights next week as the Bank of England and Bank of Japan get their chance to set policy after the Fed’ and ECB’s decisions this week. Sweden’s and Norway’s central banks will too be holding policy meetings in the coming days and it’s going to be a busy week for economic data as well, with the December flash PMI releases attracting the most attention. The pound is likely to stay in the spotlight, as apart from the post-election reaction and the BoE meeting, a flurry of key indicators will be watched out of the United Kingdom that could determine if a rate cut is forthcoming in early 2020.

Australian jobs report a risk for the aussie’s bounce

The Australian dollar has been having a solid month, gaining more than 2% versus its US counterpart so far in December. However, the rebound could receive a setback if Thursday’s employment numbers disappoint. The aussie’s strong bounce caught many traders off guard, suggesting they had become overly bearish. And while recent data out of Australia has been on the soft side, it seems premature at this stage to predict that the Reserve Bank of Australia will have to resort to quantitative easing to stimulate the Australian economy. For now, the RBA still has about 2-3 rate cuts of 25-basis points left in its arsenal and the November jobs figures should help investors get a better sense of whether policy easing is on the cards in early 2020. 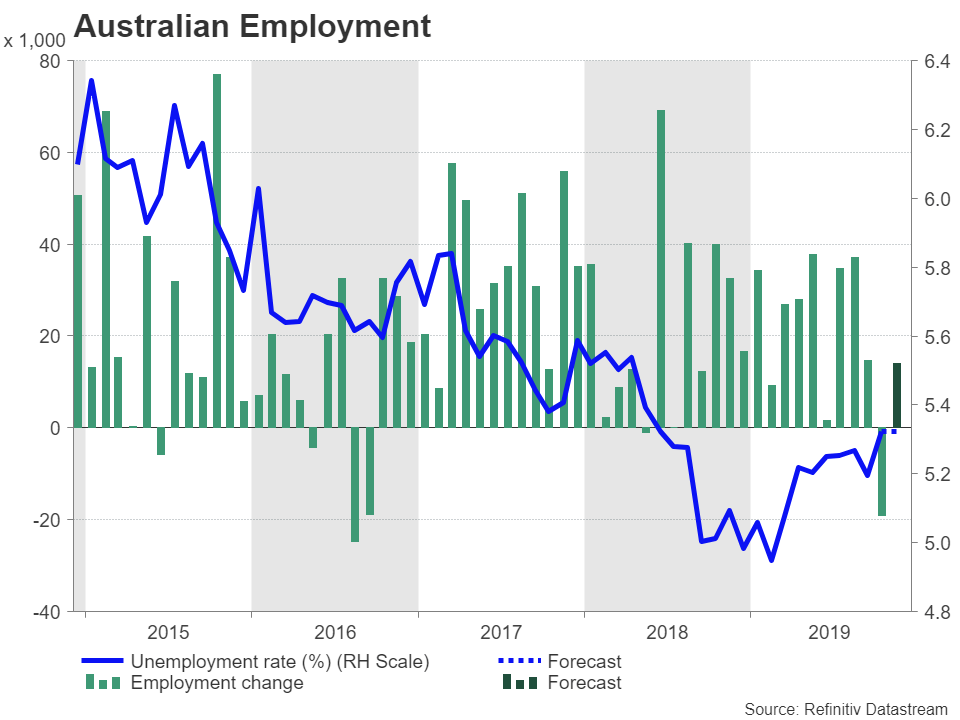 Aussie traders will also keep an eye on monthly indicators out of China due on Monday. Growth in industrial output is forecast to have accelerated slightly to 5.0% year-on-year in November and retail sales to 7.6% y/y. Investment in urban areas is expected to have remained steady, rising by 5.2% annually in the year to November. 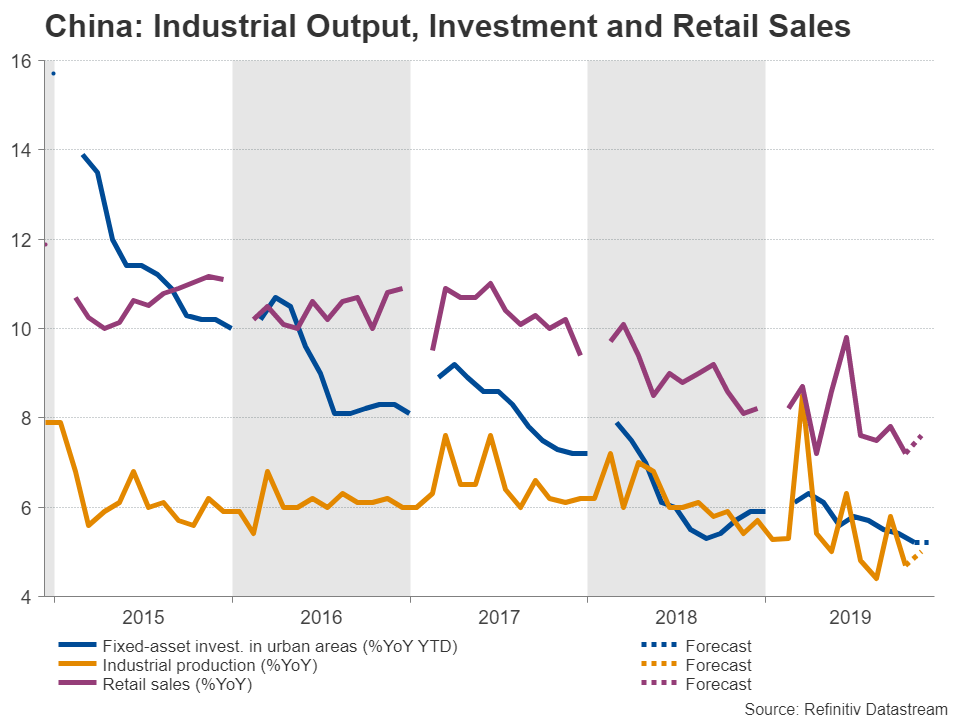 But with markets in euphoria on the prospect of an imminent ‘phase one’ US-China trade deal, reaction to the data is likely to be muted even if there are any negative surprises.

Another currency that’s at risk from a downside correction if the data doesn’t match the market forecasts is the New Zealand dollar. Like the aussie, the kiwi has been boosted by the weaker US dollar and appears to be forming a new uptrend, having been on the rise since early October. GDP growth figures for the third quarter out on Thursday will be important in helping investors decide whether the data supports the Reserve Bank of New Zealand’s recent neutral shift. The ANZ business outlook survey on Tuesday will also be monitored to assess the health of the New Zealand economy.

Bank of Japan to hold fire as inflation remains low

The Bank of Japan will be the first of the major central banks to announce its decision early on Thursday and is widely expected to keep policy unchanged. Although policymakers have repeatedly stressed that the Bank is ready to act if needed, markets are in no doubt that the bar is very high for further easing, especially now that the government has announced a fiscal package to offset the impact of the sales tax hike.

Yet, recent data suggests there’s a clear risk the economy may still be headed in the direction where additional stimulus would be needed. Core machinery orders – a closely watched barometer for business spending – have been declining since July and household spending fell by more than expected after the sales tax hike came into effect in October.

Exports have also been falling all year, while the core CPI rate that excludes fresh food prices and is targeted by the BoJ for its 2% inflation goal stood at just 0.4% y/y in October. Further weakness in exports in November (due Wednesday) and core CPI (due Friday) would strengthen the case for further monetary stimulus. Markets have currently priced in just over a 50% probability of a 10-bps rate cut by December 2020 and those odds could rise if the incoming data in the coming weeks were to deteriorate. 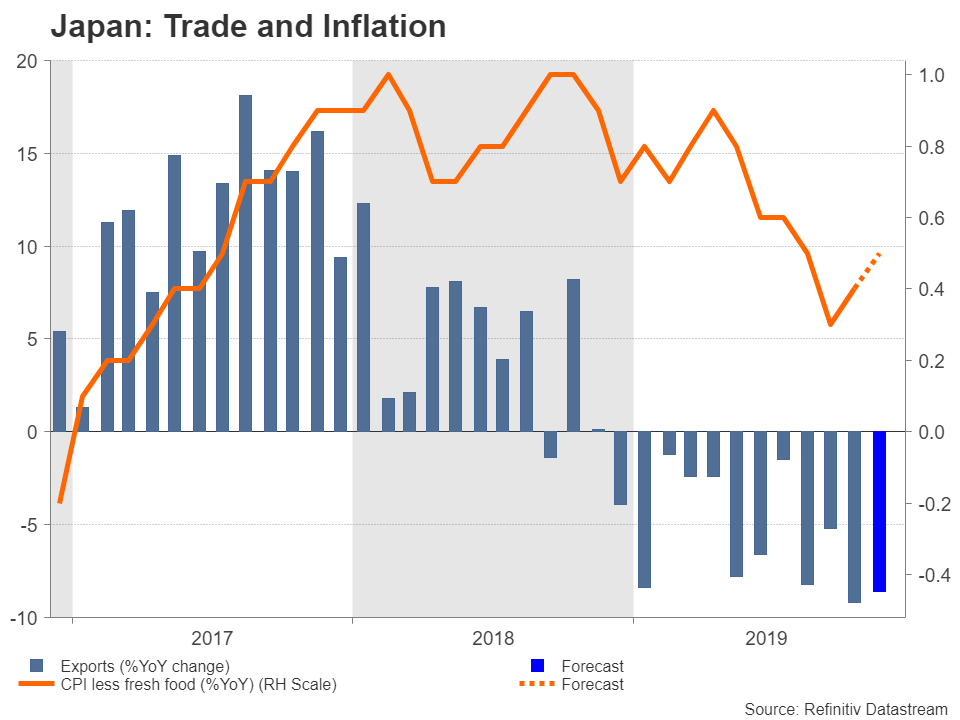 Can flash PMIs bring Christmas cheer for the euro?

The flash PMI readings for December will be the main focus for the euro early next week and will be the final essential release of the year for the Eurozone. After some recent encouraging signs that the worst of the downturn is over in the euro area, investors will be hoping IHS Markit’s preliminary PMI prints for December will show the Eurozone economy ended the year on a slightly more positive note. The flash releases for manufacturing, services and composite PMIs are all due on Monday.

More survey data will follow on Wednesday with Germany’s Ifo business climate index. If the Ifo report follows in the footsteps of this week’s better-than-expected numbers from the ZEW survey, it would reinforce the view that the slowdown in Germany is bottoming out, bolstering the euro. Also published on Wednesday are the Eurozone’s final inflation estimates for November. 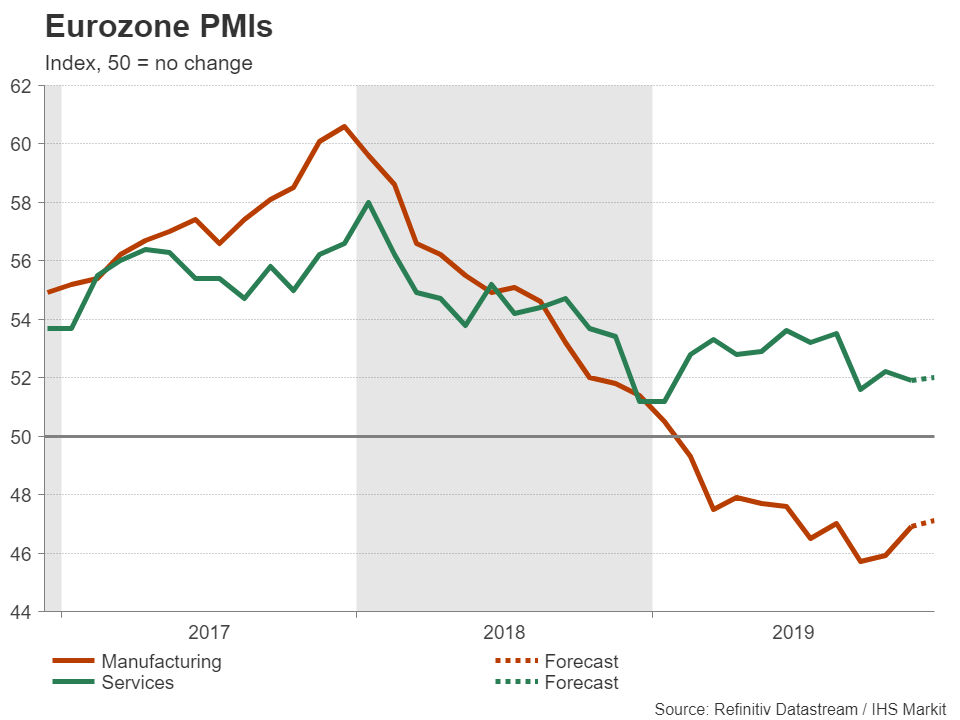 The euro made a decisive break above the $1.11 level this week and could stretch those gains if the upcoming sentiment surveys beat expectations.

Staying in Europe, the central banks of Sweden and Norway will announce their policy decisions on Thursday ahead of the Bank of England’s later in the day. Both central banks stand out from the crowd because unlike most of their peers who have been cutting interest rates this year, the Riksbank and Norges Bank have been raising them. But the two are about to diverge. The Norges Bank switched to a neutral stance after September’s hike, signalling it plans to keep rates steady “in the coming period”. But the Riksbank, which raised rates in January for the first time since 2011, is widely anticipated to follow it up with a second increase in December and lift its repo rate out of negative territory to 0.0%.

Those expectations got a boost from stronger-than-forecast inflation figures released this week and the Swedish krona jumped in response. However, GDP growth has been sluggish in recent quarters and without a significant pick up, the Riksbank may signal it is done hiking for now, which is likely to put a cap on the krona’s appreciation.

BoE meets but politics and data may attract more attention

Wrapping up the central bank gatherings on Thursday is the Bank of England’s decision. The December meeting is likely to be a non-event as it does not contain a press conference and no change in policy is expected. However, with the UK general election out of the way, policymakers may signal a readiness to alter course on policy.

The UK economy has been struggling since the second quarter with inflation repeatedly missing the forecasts. A barrage of data due next week could underscore the economic weakness and force the BoE to adapt a decisively dovish tone from the current neutral line of “monetary policy could respond in either direction”.

First to hit the markets are the flash December PMIs on Monday. They will be followed by October jobs numbers on Tuesday, and November CPI and retail sales figures on Wednesday and Thursday, respectively. Closing the week on Friday will be revised GDP estimates for the third quarter. 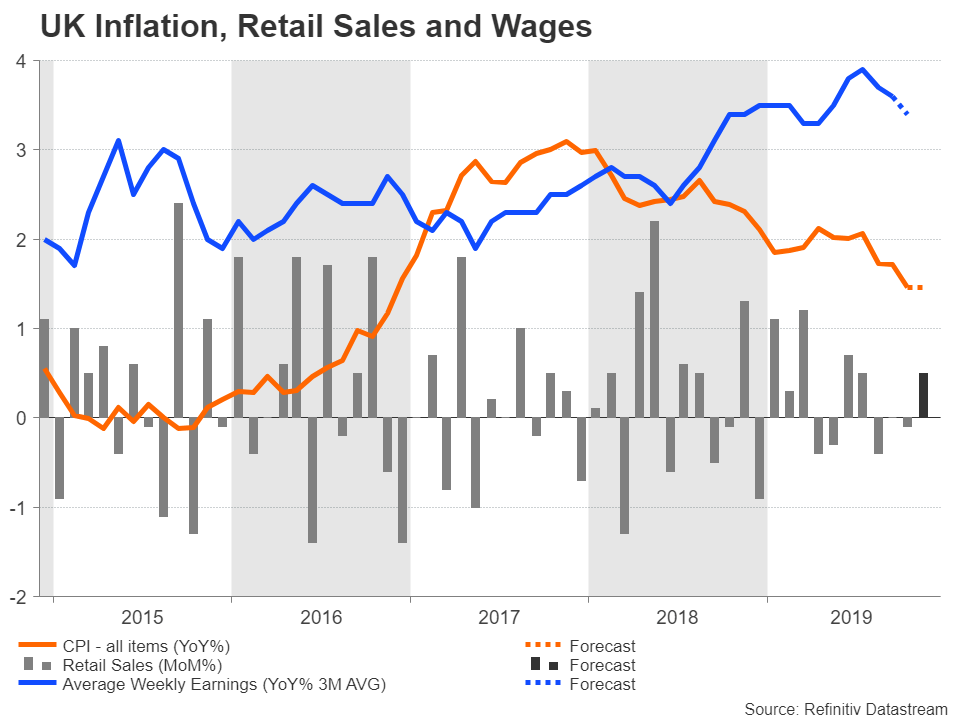 If the data points to renewed softness in growth, it could take some of the heat off the pound which has been rallying on the back of Johnson’s election victory, where he secured a commanding majority. However, with the vote outcome breaking the political deadlock, the BoE may see reduced risks ahead and not be in a rush to ease policy.

The US calendar will also be fairly busy in the coming days, though they may not necessary move the US dollar significantly. Starting the week on Monday are the IHS Markit flash PMIs. Following the disappointing ISM PMIs for November, all eyes will be on the first glimpse at economic activity in December. The New York Fed will also publish its Empire State manufacturing gauge for December on Monday. Any negative surprises there could knock the greenback, which surged versus the yen after President Trump hinted that a trade deal with China was within grasp.

On Tuesday, building permits, housing starts and industrial output numbers for November will be doing the rounds, and will be followed by existing home sales and the Philly Fed manufacturing index. The final GDP print for the third quarter is due on Friday but likely to draw a bigger response are the personal income and spending numbers for November, as well as the core PCE price index.

Personal income disappointed in October, holding flat instead of rising as forecast. It’s projected to have grown by 0.3% month-on-month, while personal consumption is expected to have increased by 0.5% m/m. 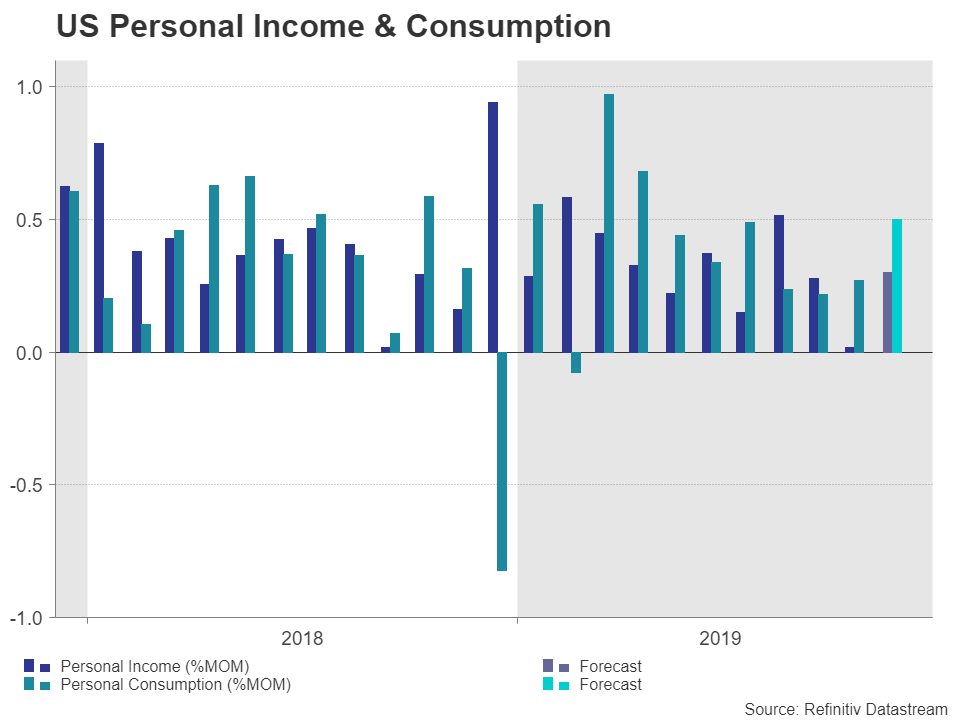 With the Fed reiterating its ‘on pause’ policy at its December meeting and sentiment riding high on news that an interim trade deal with China is very close to be inked, any reaction to the above data is likely to be subdued.

North of the border, November inflation figures and October retail sales numbers will be watched out of Canada.