Monthly reports on inflation, retail sales and employment will get into full swing next week, but China is likely to steal the limelight as it will have the busiest calendar. All eyes will be on the third quarter GDP estimate as China battles to prevent a hard landing of its economy amid a deepening trade dispute with the United States. But the ongoing trade war isn’t the only thing that will be causing fatigue for investors as the Brexit drama also shows no sign of ending and Britain and the European Union look set for another showdown.

With investors pricing one more rate cut by both the Reserve Bank of Australia and the Reserve Bank of New Zealand before the year is out, employment and inflation numbers will be watched out of the two countries next week. Prior to the data though, the minutes of the RBA’s October meeting will be made public on Tuesday.

The minutes could indicate whether RBA board members are leaning towards another cut so soon after the October move. But a bigger risk for the Australian dollar will be Thursday’s employment stats. In August, the jobs numbers had underwhelmed as a rise in overall employment could not mask the drop in full-time positions and a rise in the unemployment rate. A disappointing report in September too could therefore be seen as strengthening the case for policy easing in December.

In New Zealand, a cut in the cash rate to 0.75% in November appears to be a done deal according to interest rate futures so Wednesday’s inflation figures for the third quarter may not have a huge reaction on the New Zealand dollar unless there’s a big positive surprise. 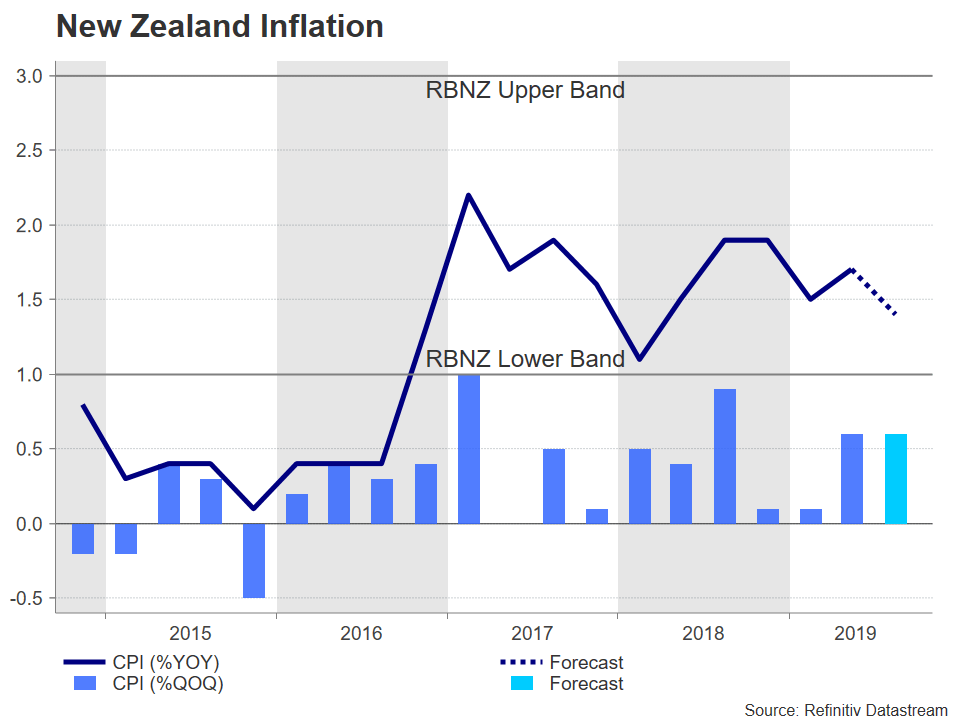 In addition to domestic indicators, the antipodean currencies will also be directed by data out of China as the world’s second largest economy continues to feel the heat of the tariff war with the US. Kicking off the week in China are trade numbers on Monday. Exports are forecast to have slipped again year-on-year in September, with analysts projecting a 3% drop according to Refinitiv, down from -1.0% in August. The latest producer and consumer price indices will follow on Tuesday. The annual rate of PPI fell to a three-year low of -0.8% in August and is forecast to have fallen deeper into negative territory in September, potentially signalling further weakness in demand for factory goods.

On Friday, more key data will follow with the release of industrial output, urban investment and retail sales numbers, as well as of course the Q3 GDP estimate. GDP growth is forecast to have slowed further in Q3 to 6.1% y/y from 6.2% in Q2. A worse figure could heighten concerns about a sharper downturn even if there is some de-escalation in tensions from the latest round of trade talks. 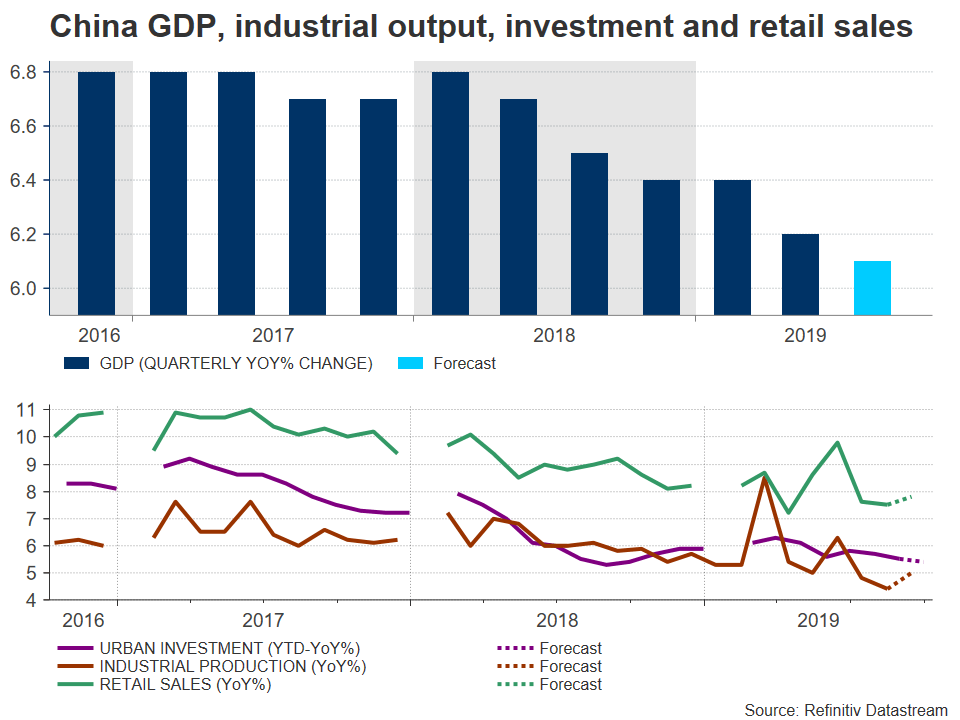 However, the industrial output and retail sales prints for September may provide some comfort, as they are both forecast to have improved slightly from the prior month.

Inflation data will be the main release in Japan over the next seven days. The figures out on Friday are expected to show the core CPI rate declining to 0.3% y/y in September. Core CPI had fallen to a two-year low of 0.5% in August, putting pressure on the Bank of Japan to increase monetary stimulus. Should price pressures ease further in the coming months or show no sign of gathering upward momentum, it will be increasingly difficult for the BoJ to sit on the sidelines while the economy slows. Japanese exporters have been struggling this year as trade tensions have hurt global trade, and consumption, which has been surprisingly resilient, is also at risk following the sales tax hike that went into effect on October 1. 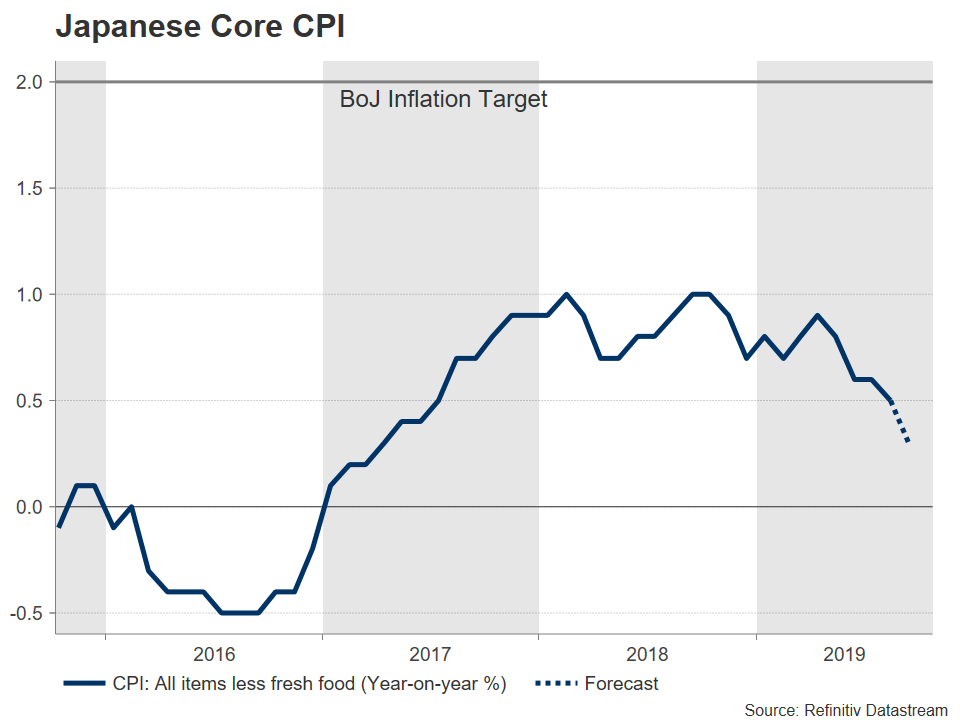 The BoJ has indicated it will “reexamine economic and price developments” at its next meeting on October 30-31 so anything that boosts expectations of policy easing ahead of it is likely to weigh on the yen.

It will be somewhat of a quiet week for the Eurozone with not a lot on the agenda that could generate substantial volatility for the single currency. Euro area industrial production figures will be published first on Monday and on Tuesday, the focus will turn to Germany’s ZEW economic sentiment index. On Wednesday, the final print of Eurozone CPI for September is due where no revision is anticipated to the flash reading of 0.9% y/y - a 2½-year low.

With the ECB board split about the appropriate direction of monetary policy and the data not likely to improve anytime soon, the euro could remain in a holding pattern until Christine Lagarde takes over at the helm on November 1 and gives her take on economic conditions in the Eurozone.

Yet another Brexit crunch point

Talks this week between the British and Irish prime ministers managed to prevent the Brexit negotiations from collapsing and so the UK and the EU will be trying to hammer out a deal at the upcoming EU Council meeting on October 17-18. The odds for an agreement shot up after the Johnson-Vardkar meeting.

But with Boris Johnson repeatedly stating that the UK will leave the EU on October 31 “come what may”, there is a worrying sense of unease as to what he would do if the EU does not like his latest backstop proposal. The prime minister is legally required to abide by the Benn Act - a legislation passed by MPs forcing the PM to delay Brexit if there is no deal by October 19. But he may yet find a way to sabotage a possible delay.

The pound’s impressive rally is at risk of floundering if no deal is struck at the EU summit. But even if Boris sends out the letter requesting an extension, the pound’s woes won’t go away that easily as the Bank of England may have to cut rates regardless of whether a disorderly Brexit has been averted.

The British economy has been slowing in recent months and a prolonged period of Brexit uncertainty can be almost as damaging for UK businesses as a crash exit from of the EU. Although manufacturers have borne most of the brunt of the Brexit chaos and the global trade tensions, growth in the dominant services sector has also been sluggish. 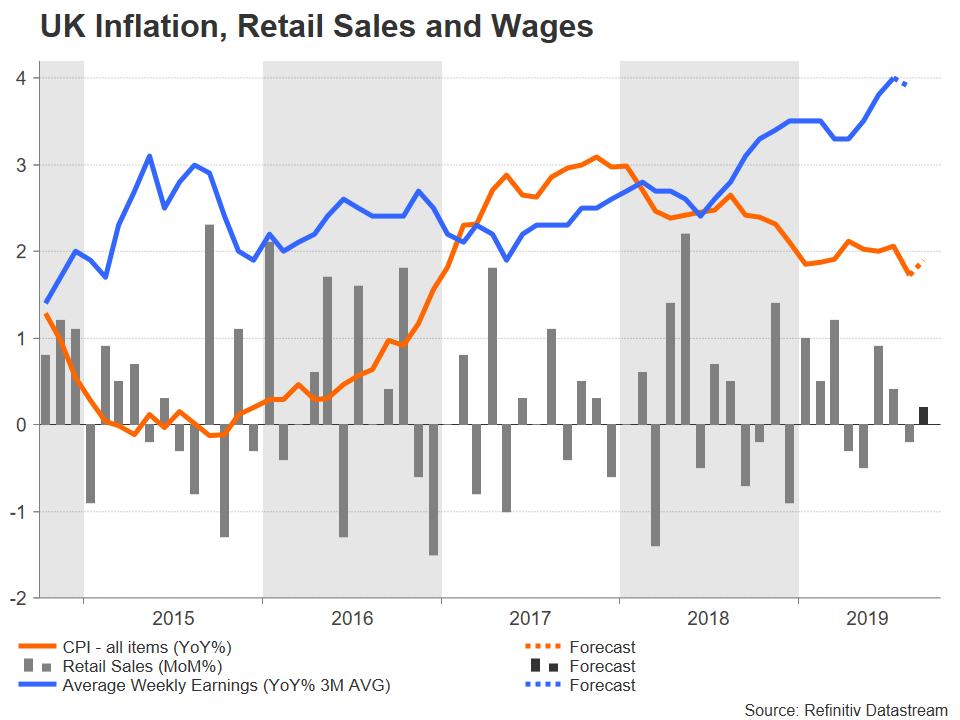 Next week’s data will therefore be watched for more clues about the health of Britain’s economy, starting with the labour market report on Tuesday, followed by inflation numbers on Wednesday and retail sales on Thursday.

Retail sales are also due out of the United States next week and will attract plenty of attention given that the US consumer is the main driver of the economy. But manufacturing gauges will be important too amid worries the sector could he headed for recession.

Retail sales, out on Wednesday, are forecast to have risen by 0.3% month-on-month in September, marginally weaker than the prior month but nevertheless a solid figure. A worse-than-expected reading would fuel expectations of a rate cut at the October meeting, knocking the US dollar down. Many FOMC members see the current robust consumption levels as a reason not to cut interest rates, so any deterioration in spending could shift those hawkish views. 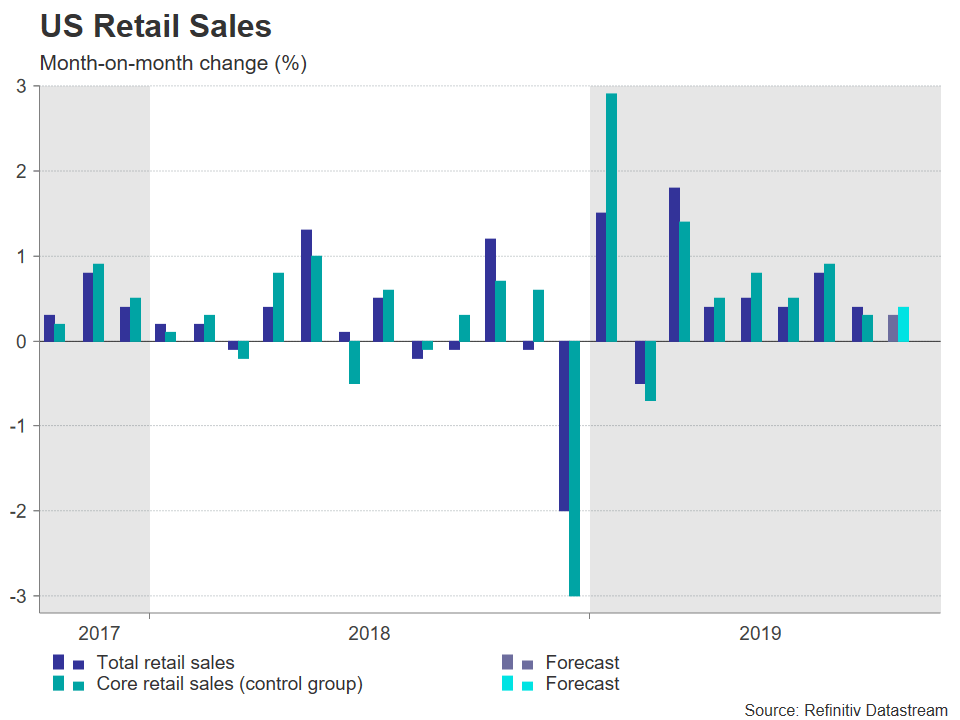 In other data, the Empire State manufacturing (Tuesday) and Philly Fed manufacturing (Thursday) indices are both predicted to decline in October, adding to growth concerns. Industrial production figures are also out on Thursday, along with building permits and housing starts.

Another country reporting inflation numbers is Canada. With the Bank of Canada being nowhere near to loosening monetary policy anytime soon, the CPI report due on Wednesday is not expected to have a huge impact on the Canadian dollar as it will require a series of negative data to significantly push up the odds of a rate cut in the next 2-3 months.