The global equity markets reflect the risk-on sentiment with DGT and URTH ETF-s, which represent global large cap and DM equities, both at an all-time high and trending bullishly. The S&P 500 made headlines by breaking the 4000-point level and closing at 4,073.95 on Tuesday, its highest ever. SPX looks extended on the daily chart, carried by weak bullish momentum. Its price is likely to pull back and has been testing 50-day SMA support level, currently near 3,900 points, during previous pullbacks. 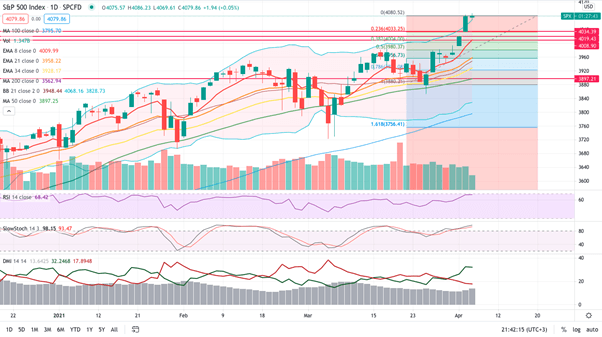 The Nasdaq-100 index turned bearish mid-February when long yields started creeping up. Its price tested 100-day SMA support on a number of occasions during March but broke 50- day SMA resistance on the 1 st of April. With earnings season on the horizon, NDX has turned bullish, albeit momentum looks weak and extended on the daily chart. Its price is up 4.00% in April but a number of unfilled gaps, which also act as a support on the daily chart, are likely to be filled in the near term. Weekly chart shows NDX is in a strong bullish trend, although momentum has been declining last 7 bars. 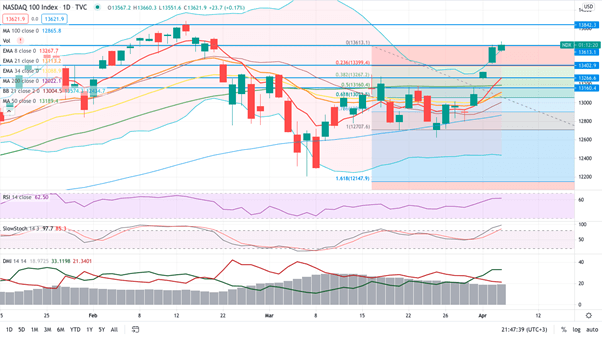 Defensive interest rate sensitive sectors, such as utilities and health care, have recently turned higher again, ever since long yields started to stabilize. XLV and XLU had a bumpy 2020, followed by pressure in March 2021 when 10-year yield touched a high of 1.77%. Both sectors are trending higher since early April, but the momentum looks weak and extended on the daily chart. XLP, or the consumer staples sector, seems to be an exception among the defensive with its price close to an all-time high and picking up bullish momentum. XLP’s attractive 2.76% dividend yield seems rich in the current environment with UST 10-year expectedly establishing a range near 1.67%.

Cyclical sectors are expectedly benefiting from higher growth expectations. The industrials and consumer discretionary sectors, XLI and XLY respectively, are both at or near their all-time highs, in a weak bullish momentum and flirting with overbought levels.

KRE and KBE, representing deposit taking U.S. financial institutions, have both benefited from higher yields and yield curve steepening. Their prices touched swing high mid-March and have now pulled back to 21-day SMA levels, moving sideways, and consolidating near US$ 67.00 and US$ 52.00, respectively.

XLE, or the energy sector, has been following oil price and moving almost in lockstep with U.S banks, touching swing high mid-March and retreating to 21-and 34-day day SMA levels since. Oil price has been volatile since March 18 that the back of recent macro and political events, while oil volatility OVX has been trending higher. 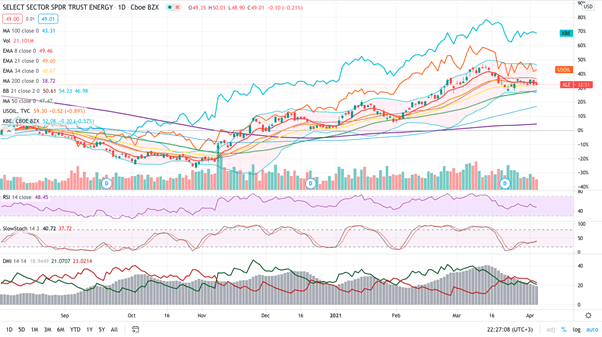 The U.S. dollar index, or DXY, pierced the 200-SMA support level near US$ 92.41 on Tuesday. Short-term momentum is still bullish while momentum is weakening. Price is now below the 200-day SMA resistance level, while finding support near the 34-day EMA. The dollar was due for a correction after staying in the overbought zone for days. We expect the dollar to consolidate near these levels, but fundamentals and technical indicators support a strong dollar. 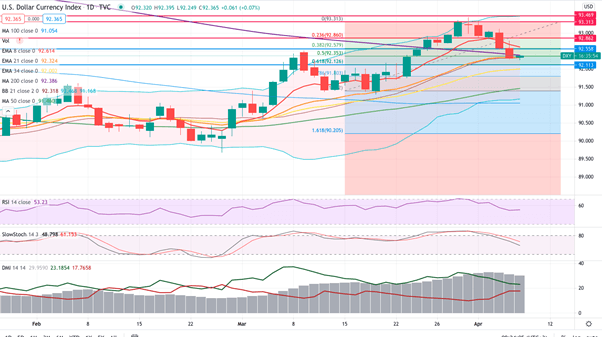