November employment report was mixed. Unfortunately for gold, however, it won’t stop the Fed’s hawkish agenda.

Nonfarm payrolls disappointed in November. As the chart below shows, the US labor market added only 210,000 jobs last month. This number is much lower than both October’s figure (546,000 gains) and the market expectations (MarketWatch’s analysts forecasted 573,000 added jobs). So, it’s a huge blow to those optimistic about the US economy. 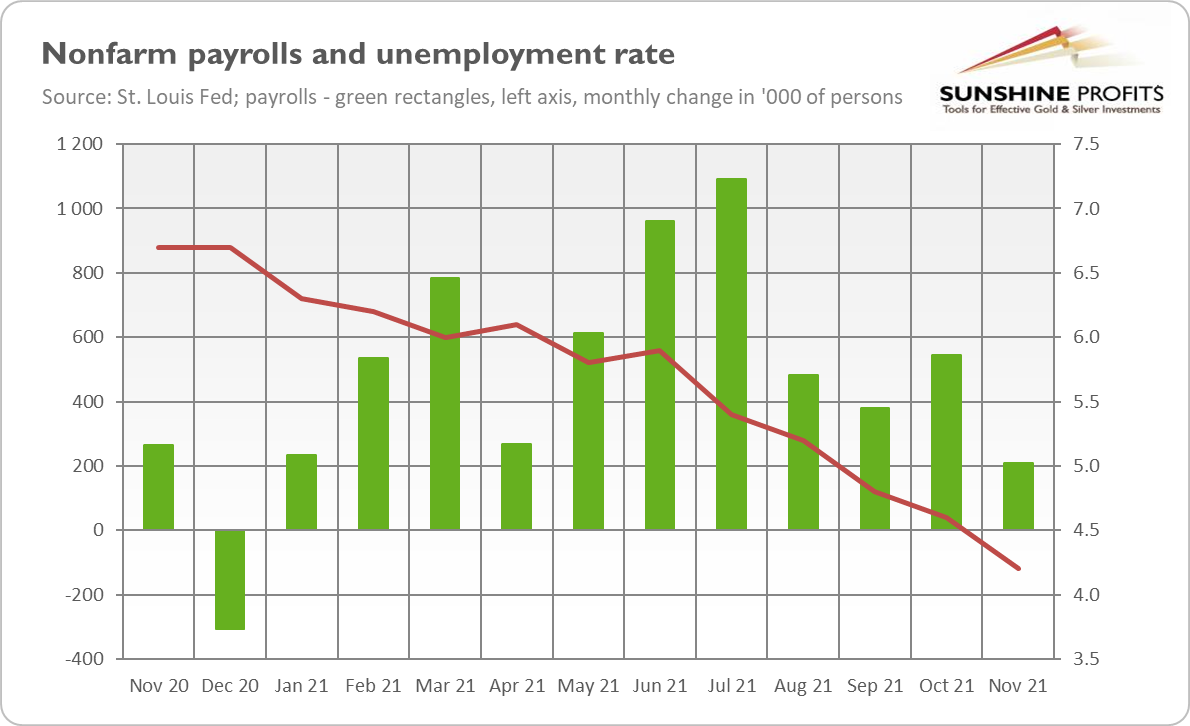 However, this is a huge blow that nobody will care about because the disappointing payrolls were accompanied by a big decline in unemployment. As the chart above shows, the unemployment rate decreased by 0.4 percentage points, from 4.6% in October to 4.2% in November.

What’s more, the unemployment rate declined simultaneously with the increases in both the labor-force participation rate (from 61.6% to 61.8%) and the employment-to-population ratio (from 58.8% to 59.2%). This means that the reduction in unemployment was genuine and rather not a result of dropping out from the labor market.

Additionally, wage inflation has slowed down from 4.84% in October to 4.8% in November, remaining below expectations, which could slightly ease inflationary concerns. Last but not least, after revisions, employment in September and October combined was reported to be 82,000 higher than previously indicated, and the monthly job growth has averaged 555,000 so far this year. Therefore, even a weak November doesn’t change the fact that 2021 marked a great improvement in the US labor market.

What does the November employment report imply for the gold market? The nonfarm payrolls disappointed, but it’s not enough to stop the Fed from accelerating the pace of tapering its quantitative easing, especially given the significant reduction in the unemployment rate. So, the hawkish revolution won’t be stopped. It may even be strengthened, as a big decline in unemployment brings us closer to “full employment” and meeting the criteria for hiking interest rates.

This is, of course, not good news for the gold bulls. After hearing worries about inflation a few weeks ago, the Fed managed to calm investors. They’ve believed that Powell and his colleagues would take the inflationary threat seriously. Markets now expect a speed-up in the pace of tapering in December and as much as three interest rates hikes in 2022 (there are even investors who bet on seven hikes by the end of the next year!).

However, there is a silver lining here. With the unemployment rate at 4.2%, the potential for further improvement is rather limited. And when a new upward trend begins, we will have rising unemployment rate and high inflation at the same time. Such conditions create stagflation, which would take gold higher.

This is still a song of the future, though. Let’s focus on the recent past: gold prices increased slightly on Friday (December 3, 2021). Although the London P.M. Fix hardly changed (see the chart below), the New York price rebounded to about $1,783 on Friday from $1,769 the day before. However, it doesn’t change the fact that gold remains stuck in a sideways trend below $1,800, as concerns about inflation exist along with expectations of a more aggressive Fed tightening cycle. 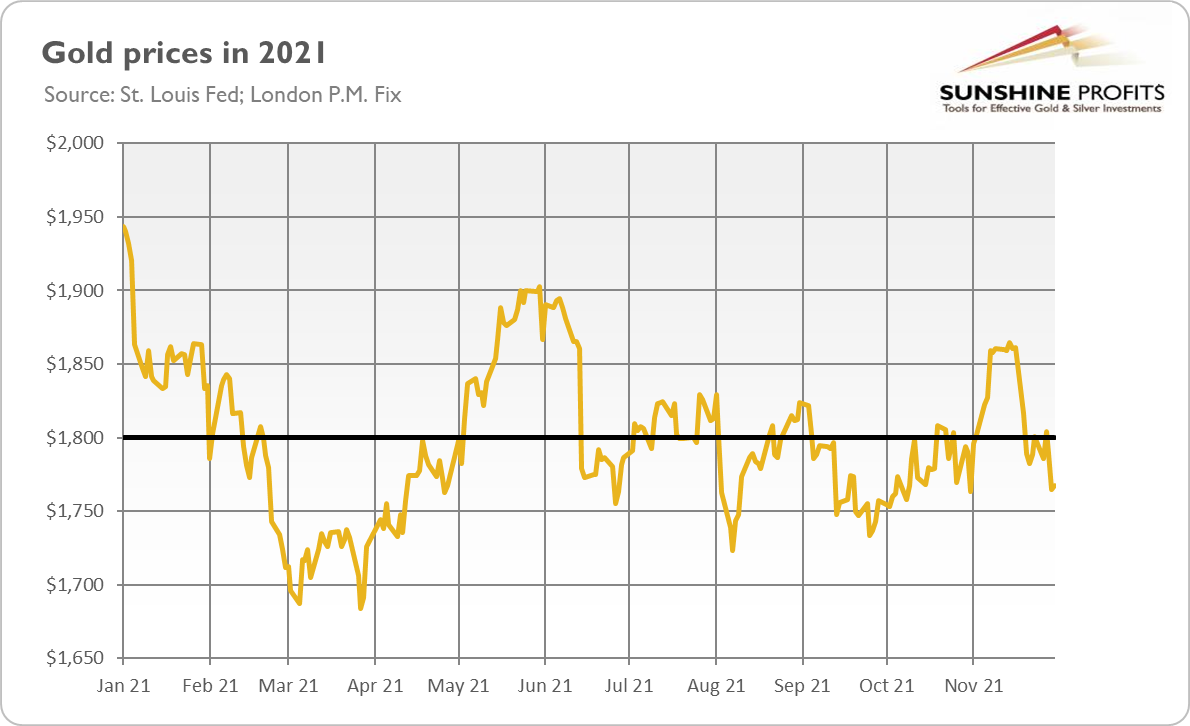 Luckily for gold, despite its hawkish rhetoric, the US central bank will remain behind the inflation curve. The cautious, dovish policy is simply too tempting, as hitting the brakes too hard could trigger a financial crisis and a recession. With the CPI annual rate above 6%, the Fed should have already hiked the federal funds rate instead of waiting until Q2 2022. And even with three 25-basis point hikes, real interest rates will remain deeply in negative territory, which should be supportive of gold prices.