Outlook: The WSJ reports economists in its survey raised the probability of recession to 44% over the next 12 months, “a level usually seen only on the brink of or during actual recessions.”

What balderdash. We haven’t had enough recessions for the word “usually” to be applicable and on what grounds does anyone attach probability to an outcome without sampling? It can be done, but we doubt these guys did it. That doesn’t mean they are wrong, but it does mean they are guessing. Couching a guess in high-falutin’ lingo is lipstick on the pig.

Funnily enough, a Deutsche Bank survey found 90% of stock market participants expect a recession before end-2023. Now there are people who really do not understand probability. Citibank has an estimate of a 50% probability of recession. Take your pick or make up your own.

The fate of the dollar depends on overall sentiment and we have two Shockers that can turn sentiment from on to off in a second. The first is in progress already—Russia cutting oil and gas supplies to Europe and Europe unable to switch suppliers or conserve/go green fast enough. This is a slow-moving train at the top of a mountain and Putin is in the driver’s seat. It’s almost certainly going to be an economic and financial catastrophe.

The other potential Shock is the US stock market proceeding south and scaring everybody except the Fed, which claims it will not step in. The FT reports US stocks have already lost about $9 trillion this year. Bloomberg data has the market value of the S&P 1500 down from $45.8tn at the end of 2021 to $36.6tn at the close yesterday. The more usually cited S&P 500, down over 20%, is “on course to record its worst performance for the first six months of a year since 1970, when equities sold off in response to a recession that ended the longest period of economic expansion in American history up to that point.”

Only energy stocks of all the S&P sectors have gained (and by 32%). Consumer discretionary stocks have fallen an equal amount, despite consumers not pulling back yet. And the US is not alone. The Euro Stoxx 600 is down nearly 17%. The MSCI’s index of Asia-Pacific markets is down 18%. has slumped 18 per cent in 2022 in dollar terms. The only winner so far this year is China.

We await the moment when the markets start believing Powell—nothing is going to stop the march toward far higher interest rates, not with a labor shortage and even if unemployment goes up. Period. Full stop. Wobbling and wavering in the 10-year is therefore inexplicable—unless a big chunk of investors does not believe Mr. Powell and still have hopes of the Fed rescue.

Another idea might be that we really did reach or will reach peak inflation very, very soon.  Again, Powell says overshooting is going to fine because it’s better than the alternative (the inflation mindset), even at the risk of recession. But still, if new data shows inflation peaking, it could promote risk appetite. And here we run smack into today’s PCE, likely to be revised down for Q1 and possibly for the May month, too. This is going to get confusing because while the PCE deflator is the official Fed benchmark, Powell has named other measures including CPI and inflation expectations baked into surveys, especially the 5-year. So, if we get the PCE deflator at a lower number today, like the same 6.3% as last time, while the core PCE deflator slips downward, as expected, markets can deduce the inflation peak and start imagining all sorts of things. Bloomberg has the core PCE deflator down from 4.9% in April, itself down from 5.3 in Feb.

See the excellent chart from Gittler at BDSwiss. Now see the second chart and despair. Whether we have peak or not depends to a too-large extent on statistics-juggling—m/m, q/q, y/y and annualizing any of them, the long-standing bugaboo of economists. Gittler deduces it’s probably the core PCE annualized (a drop, hence the peak having passed).

A widespread belief in peak inflation in the US “should” drive the dollar back down on the “We’re all right, Jack” mindset. 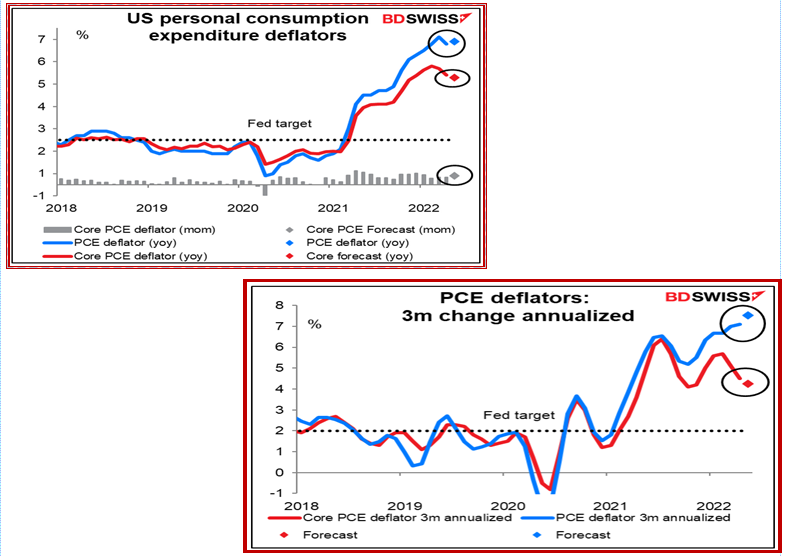 Note to Readers: The US is about to go into the July 4 holiday weekend. We will not publish any reports on Friday, July 1, 2022 until Wednesday, July 6th.

EUR/USD is flat at the start of the week following Friday's sell-off from the 1.0250s that reached a low of 1.0141. The move came from a blockbuster US Nonfarm Payrolls report. The price is starting to decelerate in the bull weekly correction.

Gold stabilizes above $1,770 as focus shifts to US Inflation data

Gold price is oscillating in a narrow range of $1,771.70-1,779.76 after a sharp rebound from a downside move below $1,770.00. The precious metal is awaiting the release of the US Inflation data for fresh guidance, which is due on Wednesday.