The crypto/bitcoin hype cycle is also right about where the internet was before the first tech crash, from early 2000 into late 2002. The internet shot up like a rocket in the last few years of the broader tech bubble of the 1990s, as bitcoin did into late 2017.

But the finale now looks like it might just be the video streaming bubble that’s soon to pop. This broader 45-year cycle started with the ascent of portable computers and cell phones, followed by the internet, email, Google, and more recently, social media. But it was broadband that allowed the video streaming finale that is coming to a crescendo now.

Netflix was the first big example in 2007 as broadband was maturing in its S-Curve penetration. The company sold cheap monthly subscriptions streamed to undercut more expensive cable services, and then they expanded to smartphones, also maturing.

And I love this model for more than the lower price… no advertising!

Spotify has led a similar trend in music streaming.

So buying and agglomerating content and streaming it appears to be the last great bubble of this super, double or 90-year version of the tech cycle.

$650 billion has been invested in the last 5 years, over $100 billion this year alone. This chart shows just the top three companies: Disney, Netflix and Warner Media, which total $250 billion over the last 10 years. Other big players are Comcast, Amazon and Apple. 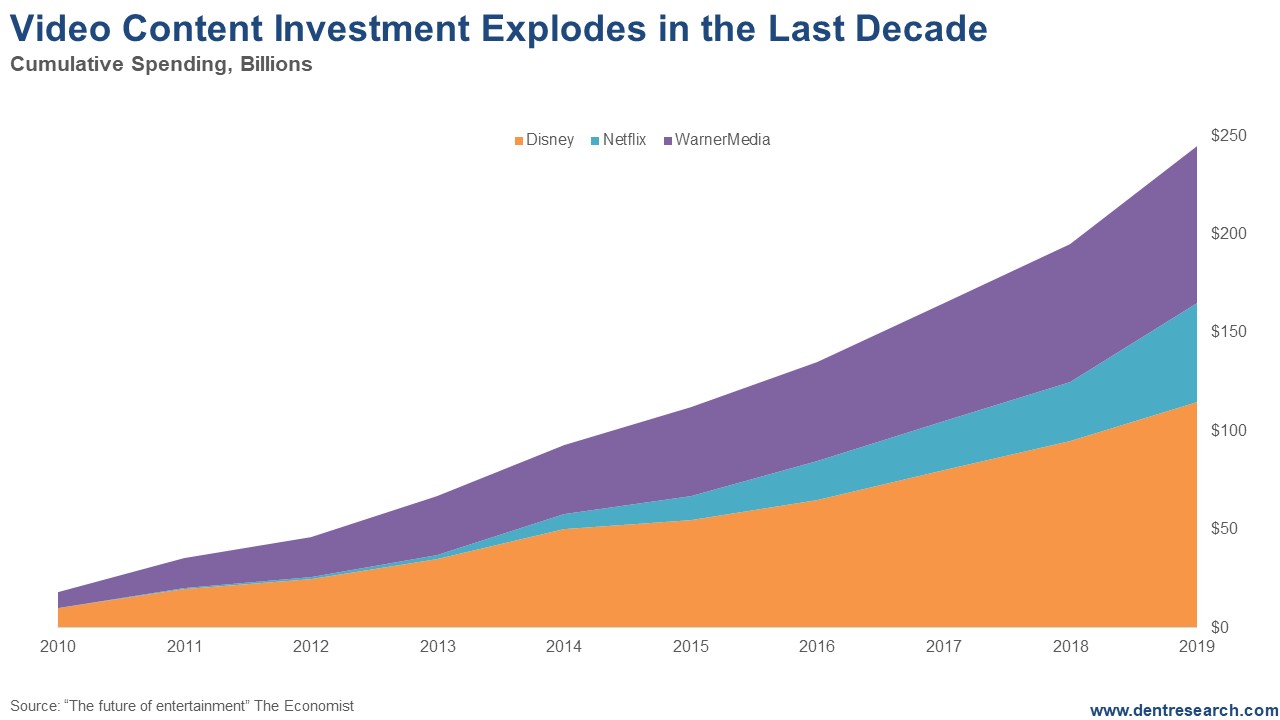 And of course, most of that was debt, at about $500 billion. This looks like the final disruptive trend in the internet cycle that has caused the winners like Netflix to see stock prices rise 37 times while losers like Viacom have fallen 5% in the greatest tech bubble in history.

But now this industry is maturing markedly this year, even for Netflix. Price-cutting will increase, margins will fall, and the industry will quickly consolidate.

Bitcoin may yet have one more bubble to new highs in its hype cycle if stocks correct and cause a final all-out stimulus push from the Fed and Trump. But regardless, this bubble alone could pop and trigger the closest thing to the 1929-32 crash we will ever see in our lifetimes, or our kids’.

So, I’m going to be watching stocks like Netflix, one of the infamous and leading FAANG stocks.

Then Humpty Dumpty comes tumbling down.