According to a survey of sentiment of leading Japanese firms (the Reuters Tankan Survey), the September index dropped to a five-month low of 18 from the 33 seen in August. Because most of the firms are export businesses, focusing on the automobile, manufacturing or transportation sectors, they remain significantly affected by the shortage of microchips which is an important piece of electronic equipment in most manufacturing processes. However, on the upside, as reported last week, Japan’s Q2 GDP growth was 0.5% higher than the first estimate of 0.3% and above the -1.1% contraction in Q1.

Yesterday, US CPI inflation for August fell to a seven-month low of 0.3% a month, below the 0.5% in July. Core inflation, excluding food and energy prices, was 0.1%, compared to the forecast 0.3%, while annual inflation was slightly lower at 5.3% per year (as expected), below the 5.4% seen in July and the 13-year high in June.

According to the japan times Japan has surpassed the United States with its first dose of vaccination at 63.6% of the population. Despite starting vaccinations later than the United States, the number of people who have received both doses is 51%, with 145.8 million doses administered.

Last night the USDJPY pair fell to a month low on the US inflation report, as the market prices in the risk that the USD may appreciate against other major currencies.  However,  it is weaker against the safe haven currencies JPY and CHF.

Yesterday’s fall in the USDJPY  marks the start of another short-term downtrend, with the price breaking through the lower triangle trading below the MA50 and MA200, and the MACD having returned significantly below the 0 line. Next support is at 109.10 and the key support at the second half low at 108.75. Conversely, if the price is able to rise above the MA200 again, there will be a first resistance at 110.15 and a key resistance at the high of the month around 110.40. 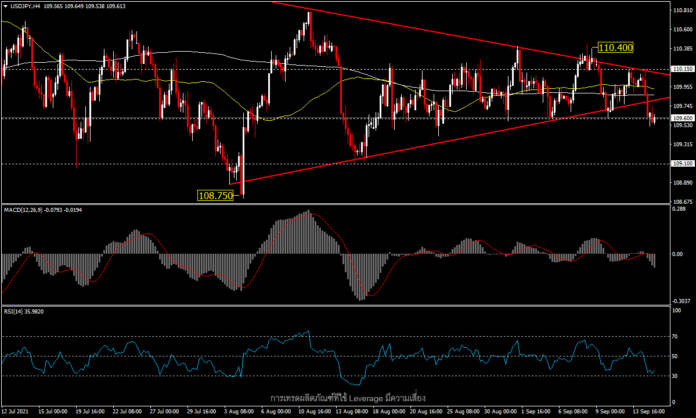