A combination of factors assisted the USD/JPY pair to gain traction for the third consecutive session on Wednesday and build on its recent bounce from the lowest level since March. The Japanese yen was weighed down by concerns that the recent surge in COVID-19 cases could hinder Japan's fragile economic recovery. In fact, Japan last week declared a third state of emergency for Tokyo, Osaka, and two other prefectures to contain the outbreak.

The concerns were reaffirmed by the Bank of Japan on Tuesday, warning of high uncertainty about the potential economic fallout from the pandemic. At its April policy meeting, the BoJ left its ultra-loose monetary policy in place on Wednesday and acknowledged that inflation will fail to reach its 2% target through early 2023. This overshadowed a more positive view on growth for the world's third-largest economy and did little to support the JPY.

On the other hand, the US dollar found some support from a strong pickup in the US Treasury bond yields and moved away from multi-week lows touched on Monday. This was seen as another factor that pushed the pair to one-and-half-week tops during the Asian session. The US bond yields jumped back above the 1.60% threshold following the release of the Conference Board's Consumer Confidence Index on Tuesday, which jumped to pre-pandemic highs in April.

Bulls further took cues from rising inflation expectations, which might force the Fed to start laying the groundwork for a future policy tightening soon. Hence, the focus will remain on the latest FOMC monetary policy decision, due later this Wednesday. The US central bank is expected to leave its policy settings unchanged, while Fed Chair Jerome Powell might stick to the view that the recovery is incomplete and that more support is warranted.

Apart from any hawkish surprise, the FOMC policy update might do little to shit the rate expectations or provide any meaningful boost to the USD. This, in turn, suggests that the ongoing recovery pair runs the risk of fizzling out rather quickly. That said, the underlying bullish tone in the financial markets might continue to undermine the safe-haven Japanese yen and lend some support to the major ahead of Thursday’s release of the Advance US Q1 GDP print.

From a technical perspective, the overnight positive move pushed the pair beyond a resistance marked by the top end of a near four-week-old descending channel. The subsequent positive move might have already set the stage for additional gains. Some follow-through buying beyond the 109.00 mark reaffirm the bullish breakout and set the stage for additional gains. The pair might then accelerate the move beyond the 109.40 intermediate hurdle and aim to reclaim the key 110.00 psychological mark.

On the flip side, the 108.50 level now seems to protect the immediate downside. This is closely followed by the descending channel breakpoint, around the 108.25 region and the 108.00 round-figure mark. Failure to defend the mentioned support levels will negate the positive outlook and turn the pair vulnerable to resume its recent corrective slide from the vicinity of the 111.00 mark, or one-year tops touched on March 31. 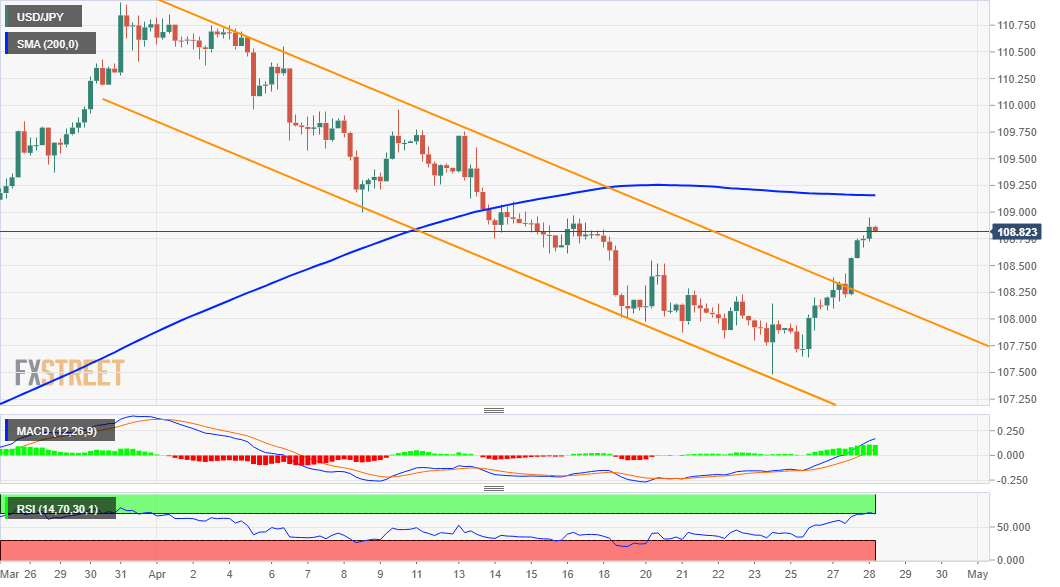