Yesterday’s signals may have produced a short trade entry following the small near-pin candlestick / doji on the hourly chart which rejected the resistance level at 111.46. This trade looks relatively doubtful as new higher support seems to have formed at 111.28 so a short trade would only be about 10 pips in floating profit. It would probably be wise to take the risk off the trade immediately by taking partial profit and hope for a strong breakdown through and below 111.28.

Trades can only be entered from 8am New York time Tuesday until 5pm Tokyo time Wednesday.

I wrote yesterday that I expected both the nearby support and resistance levels would hold. I thought that the most probable opportunity would arrive as a bearish rejection of the resistance at 111.46 after the New York open which would trigger my bearish bias. This was a good call as this scenario did play out. However, the price has hardly moved down from this area yet, with new higher support at 111.28, so the next move seems impossible to predict. I will probably be wisest to be bullish once the price has got above 111.46 for a couple of hours, or bearish if the same happens in reverse below 111.28, as there is no long-term trend to rely upon. 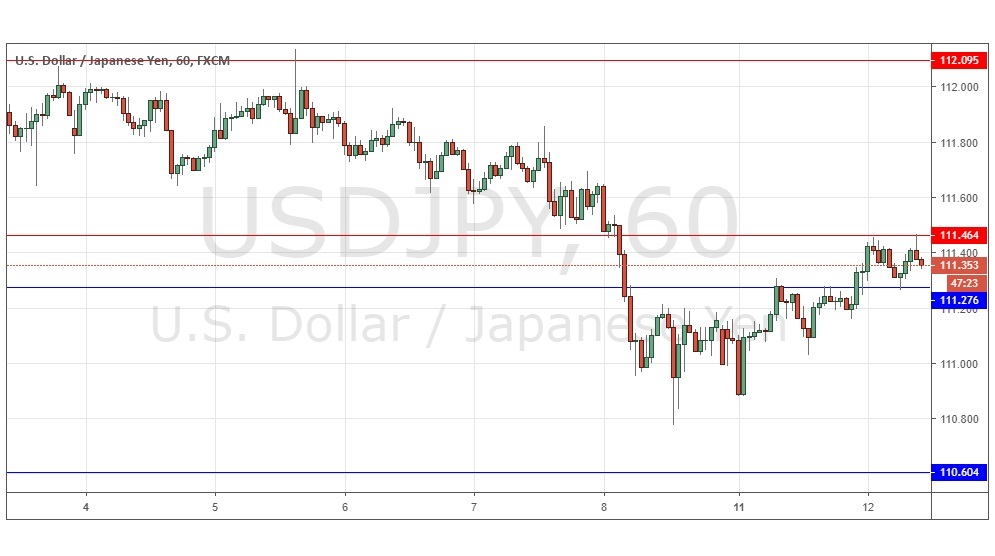 There is nothing of high importance due today concerning the JPY. Regarding the USD, there will be a release of CPI data at 1:30pm London time.