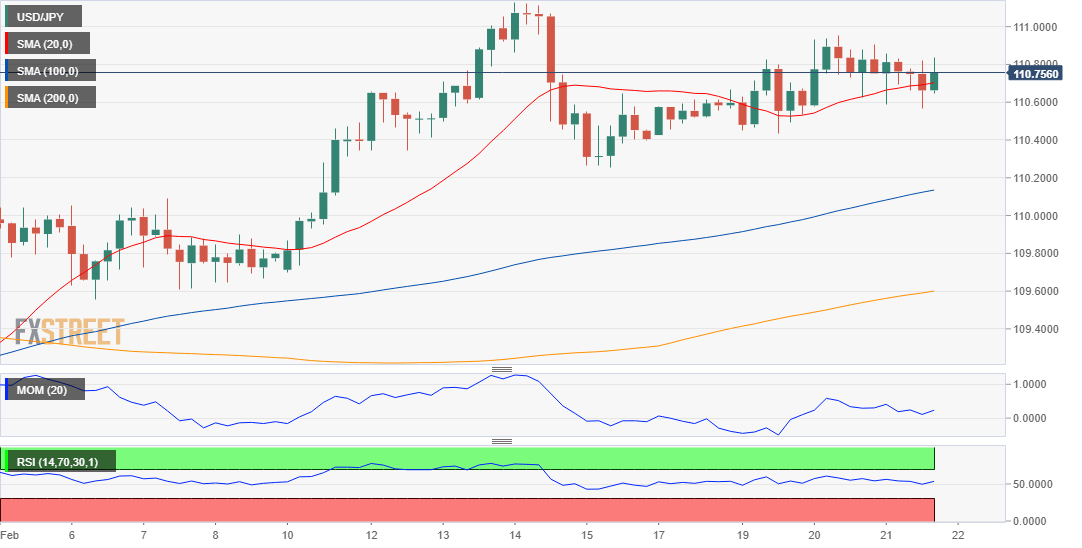 The USD/JPY pair ends the day as it started it at 110.80, recovering during US trading hours from a daily low of 110.56. The pair has been trading within well-limited intraday ranges ever since the week started, as demand for the greenback seems more a result of seeking for safety rather than legit interest, while the Japanese currency has turned unattractive following dismal macroeconomic data and comments from BOJ's Kuroda, opening doors for additional stimulus. Early Thursday, Japan released the February preliminary Manufacturing PMI which resulted at 48.5 vs. the previous 50.3, falling into contraction territory for the first time since June 2016. Also, the All Industry Activity Index fell in December by 0.4%, worse than the -0.2% expected and the previous -0.3%. The modest intraday recovery seems correlated to US Treasury yields behavior, showing some signs of life for the first time in the week at with the benchmark yield for the 10-year note up to 2.695%. Japan will release January National inflation during the upcoming Asian session., foreseen up 0.2% YoY vs. the previous 0.3% advance.

From a technical point of view, the short term picture continues offering a neutral-to-positive stance, as, in the 4 hours chart, the pair keeps developing above its moving averages, which offer modest upward slopes, as technical indicators hold within positive levels, the Momentum bouncing from its mid-line and the RSI directionless around 56. The pair could extend its decline once below 110.45, although it would need to lose 109.80 to turn bearish, while bulls could take over the pair on a break above 111.12, the yearly high.