Since mid-day on Tuesday, the USD/JPY traded sideways between the support of the 109.60/109.67 zone and the resistance of the 109.91/109.94 zone. Between these two zones, the rate ignored the 61.80% Fibonacci retracement level and the weekly S1 simple pivot point.

On the other hand, the rate could end the sideways trading by passing the support of the 109.60 level. In this scenario, the pair would look for support in the mid-March high level zone at 109.38/109.23. 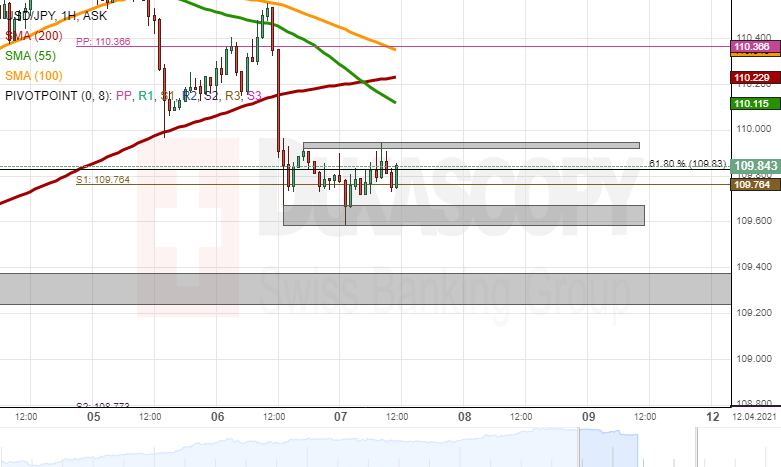 EUR/USD is holding onto gains above 1.1850 as investors cheer a better vaccination schedule in Europe and upbeat Services PMIs. President Biden is set to provide an update about the infrastructure plan and the Fed's minutes may shed light on the bank's next moves.

GBP/USD is trading around 1.38, consolidating its losses and unable to take advantage of the dollar's retreat. The UK begins using Moderna's vaccines, expanding its campaign. Upbeat data underpins both currencies.

XAU/USD keeps the red below $1,740, focus remains on FOMC minutes

Gold edged lower on Wednesday and eroded a part of the overnight gains to two-week tops. The underlying bullish sentiment prompted some technical selling near the $1,745-46 hurdle. Sliding US bond yields undermined the USD and helped limit losses ahead of FOMC minutes.

Ripple Labs won in a discovery hearing that would force the Securities & Exchange Commission (SEC) to hand over its internal documents on Bitcoin and Ethereum. The XRP price has since risen 23.4% in the past 24 hours, trading above $1.

Welcome to FXStreet's Live Market analysis blog for April 7. The team is following the hottest stocks –  PLTR, NIO, CCIV, CCL and more – as markets remain upbeat about a vaccine and stimulus-led recovery.