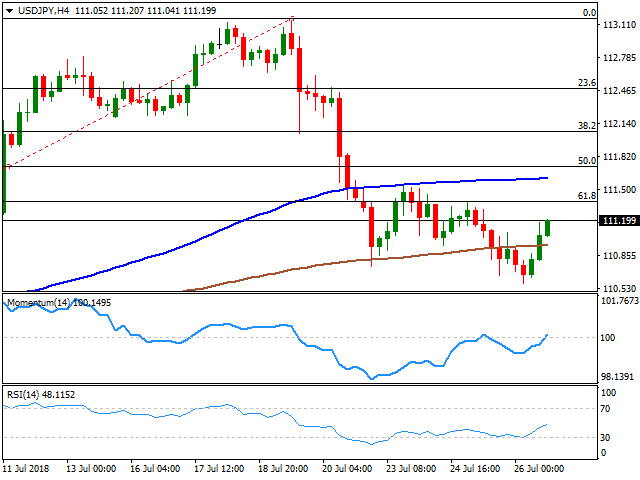 The USD/JPY pair recovered from a two-week low of 110.58 to trim most of its weekly losses and settling around 111.20, as the greenback climbed alongside with US Treasury yields, with the yield on the 10-year note up to 2.97%. US indexes traded mixed, despite concerns about a trade war have alleviated after US President Trump and EU Chief Juncker announced the principle of an agreement to reciprocally lower tariffs. Macroeconomic news coming from Japan were positive, as the Corporate Service Price Index was up 1.2% YoY in June, beating expectations of 1.0%, and while US ones disappointed, the pair is any way up, on hopes the upcoming US Q2 GDP reading will be much stronger than Q1 one. Ahead of it, Japan will release its July Tokyo inflation, seen up by just 0.5% YoY, below June's result of 0.6%, while core readings are expected unchanged. Despite recovering, the pair remains below the 111.40 key Fibonacci resistance, with gains above it required to convince bulls. In the 4 hours chart, the pair is half-way between its 200 and 100 SMA, while technical indicators present upward slopes, but so far hold within neutral territory, leaning the scale toward the upside for the upcoming sessions.