The Yen has been trading in the middle of the channel shown in the trendline chart below. We spiked all the way into 0.009887 at the beginning of the pandemic only to fall precipitously as equities began their rally in the couple of weeks following the first break of the news. Since then, we have trended a few times coming close on one instance at the end of July to the top at .0096050 while holding support on this grind up back towards the highs. Similarly, the USD/JPY has held resistance on the Yens’ move lower after the pandemic news so overall for the pair we remain within a similar channel sticking however to the upside. 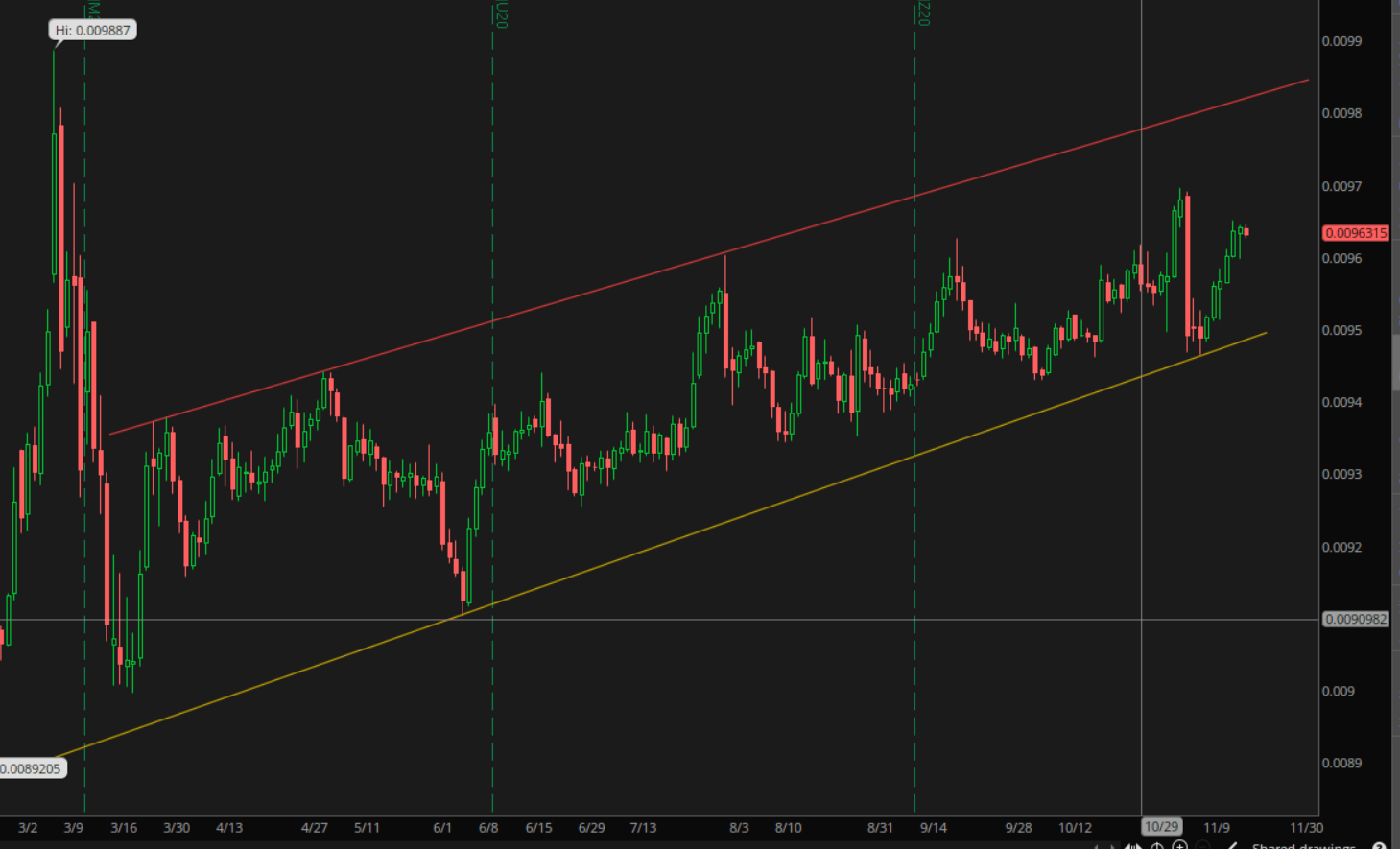 While this is happening, market participants wonder why the USD keeps declining against the yen. Could it be the yields? The US Feds’ promise to keep rates unchanged and near zero for the 2-year horizon has kept yields in the US below Japanese bonds and have not really resurrected in value. This explains part of the conundrum with the prices for the USD/JPY and with precious metals. Governments around the world keep printing money to support their population with stimulus which has deteriorated the overall value of the USD as they have with a basket of currencies. We have a soaring federal deficit and the US National Dept keeps climbing above 27.27 Trillion.  Going forward, the risk averse Japanese Yen appears to be in a reasonable position. The risk of another stimulus package not coming before the Jan 20th inauguration of the new executive branch of the US Government poses a threat for both local and external equities. Amongst spreading virus counts and continued shutdowns the IMF warned last week that the global recovery appears to be losing momentum. Unlike China virus cases in Japan were also setting records. This caused Tokyo to raise its Covid-19 alert status to its highest level. While policymakers refrained from imposing lockdowns, they urged citizens to be more cautious. The Nikkei 225, Japan’s benchmark stock index, halted its impressive winning streak from earlier this month after closing at its highest since 1991.

Meanwhile, here is an interim trade idea for the JPY [6J] and USD/JPY:

At TradeGuidance we try and give our subscribers clear and concise actionable ideas supported with charts every single day. We strive to analyze price moves while factoring the underlying fundamentals and present a tradeable set of levels twice daily without confusing rhetoric which otherwise derails the short-term traders’ focus. Our goals has always been to trade what we put out ourselves while encouraging our subscribers and followers to be patient and wait for the entry/entry range while respecting stated stops while leaving the profit targets entirely to the individual. There is a risk trading currencies, futures, stocks and options and there is a risk of losing all/part or in some instances more than you originally invested. We attempt to keep you in the right side of the market with manageable risk so that you can be back trading the markets every day. Follow us on Twitter at TradeGuidance where all our ideas are presented first ahead of publication on financial news websites.