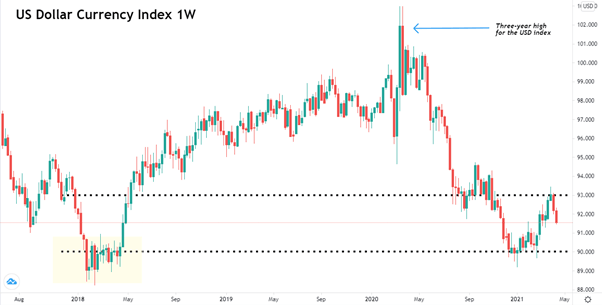 The US Dollar Index (DXY) has ranged between 90.0 and 93.0 for the past half a year. Some wicks have broken through these touchstones, but nothing excessive. Nor were there several retests of the rejections, and as such, their viability quickly faded.

It has been three years since the DXY has held a similarly weak range. The first four months of 2018 consistently held close to the current 90.0 support/ physiological level. At this time, the bravado and confidence installed by the ‘Make America Great Again’ rhetoric began to peter out.

In the past two weeks, USD Bears have been taking ground. Consequently, the index was pushed from approximately 93.0 to 91.5 without much hesitation.

While the index is confidently trending downwards, I do not think the USD will break through the 90.0 support. A mingling of global and local issues will help keep the currency within the band mentioned above and hopefully negate a significant breakout in either direction in the short term.

Economic data coming out of the US is not all that bad as the stimulus checks produce their desired effect. For instance, state manufacturing volumes, retail sales, and jobless claims are all bettering their forecasted values.

However, a few concerns might be countering the positive data, compounding the reluctance of anyone to call an end to the economic uncertainty.

Countering the counter are issues occurring over the Atlantic. The largest weighted currency in the index is, of course, the Euro. Several days of violent protests erupted on the streets of Belfast, leading to Brexit negotiations regarding the trade protocols as they apply to the movement of goods between Northern Ireland, Great Britain, and the Eurozone. These negotiations are ongoing. 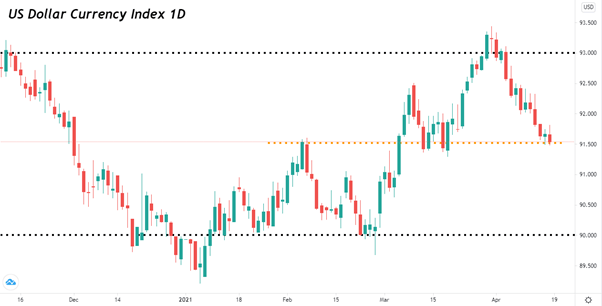 In all likelihood, I expect the index range to narrow to between 93.0 and 91.5 in the short term. This conclusion is drawn by acknowledging the better than expected US data, as well as the recent turning-point fake-outs occurring around the 91.5 level. The 91.5 psychological level serves as either a resistance or support level, depending on which side it is approached.