Last Thursday’s signals were not triggered as unfortunately the low was printed a pip or two above the support level identified at 1.3422.

Trades may only be entered between 8am London time and 5pm New York time on Monday.

I wrote last Thursday that the price was in a near 50-day bullish breakout above recent highs, and had some healthy momentum, so I only wanted to look for long trades here. I noted in support of this approach that the Canadian Dollar, along with the Australian Dollar, was one of the weakest major currencies right now. This was a good call as the major movement that day was bullish, with he price contained by both support and resistance levels nearby which I had accurately identified.

The price is now in a consolidation between those same two levels which are still holding, with perhaps a very slight short-term bearish bias at the time of writing. The price is likely to consolidate here unless the retail sales data due later is a major surprise, so the best approach would probably be to trade rejections of either level on short-term time frames while being very careful with risk and booking profits quickly. I have no directional bias, but if there were a strong bullish break, I think it would be likely to travel further than any bearish breakdown that we might get. A break above 1.3470 would be a bullish sign, but there is the psychological level at 1.3500 plus resistance just 30 pips past that which are likely to be difficult for the price to break beyond. 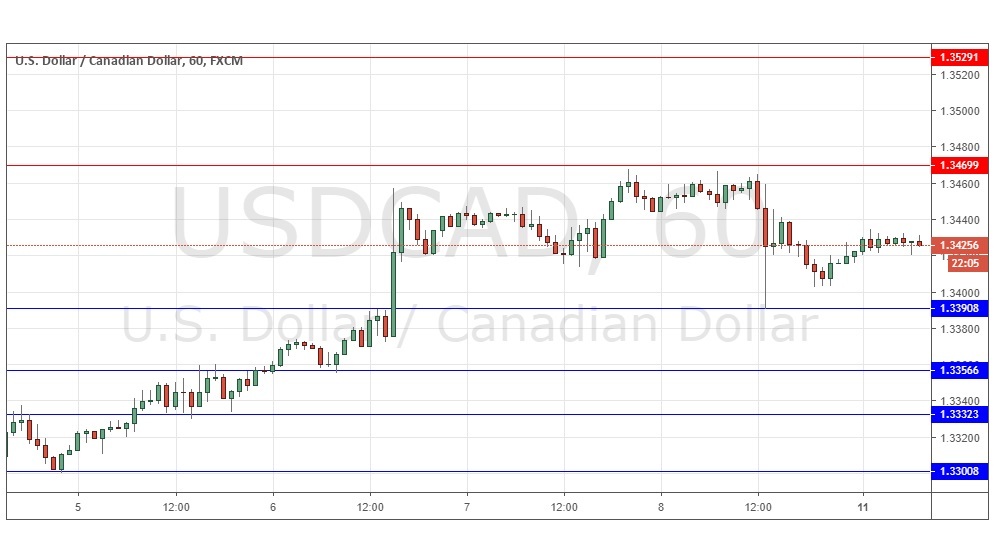 There is nothing of high importance due today concerning the CAD. Regarding the USD, there will be a release of Retail Sales data at 1:30pm London time followed at 1:00am by a minor speech from the Chair of the Federal Reserve.