Yesterday’s signals were not triggered as the resistance level at 1.3367 was not hit until after the close of the New York session.

Trades may only be entered before 5pm New York time on Wednesday.

I wrote yesterday that the price looked bullish as it got very close to making a new 20-day high price. If the price could remain above 1.3332 for the first couple of hours of the London session, that would be a bullish sign that the price would be likely to go on and reach the resistance at 1.3367, but I doubted it would be able to get any higher than that. This was a perfect call as it was an accurate forecast of what happened.

With the current strength of the USD and the serious weakness in the CAD, being long of this pair has been quite rewarding. Technically, the level at 1.3373 is a major swing high inflection point so if the price can get established above that today and keep trading there for a couple of hours, it would be a bullish sign. It is a true pivotal point so is a level worth watching today.

There is major Canadian data and a central bank release due later which could push the price anywhere, so be cautious. 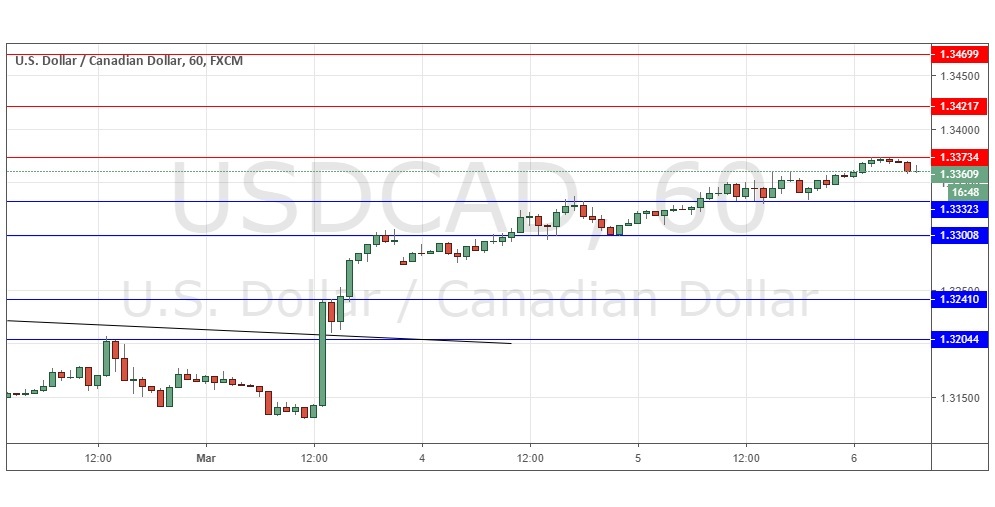 There is nothing of high importance due today concerning the USD. Regarding the CAD, there will be a release of Trade Balance data at 1:30pm London time, followed by the Bank of Canada’s release of its Rate Statement and Overnight Rate at 3pm.