Yesterday's signals were not triggered, as the price did not reach 1.3262 until the Asian session.

Trades may only be entered between 8am and 5pm London time today.

The best method to identify a classic "price action reversal" is for an hourly candle to close, such as a pin bar, a doji, an outside or even just an engulfing candle with a higher close. You can exploit these levels or zones by watching the price action that occurs at the given levels.

I wrote yesterday that shorts would probably be better than longs, but overall the price will probably move little today and just consolidate due to the U.S. holiday. I had no directional bias and noted that over the medium-term, the price has gone all over the place, making trading this pair typically unpredictable.

This was a pretty good call as the price has not moved much, but the bearish bounce off the nearby resistance was the most interesting feature and matched my eye towards potential short trades. I see 1.3262 as likely to be the pivotal level today: if it is not breached and Crude Oil rises again later today when the U.S. returns from holiday, I would take a bearish bias here as we might see a nice downwards movement with no support to break it until 1.3165. 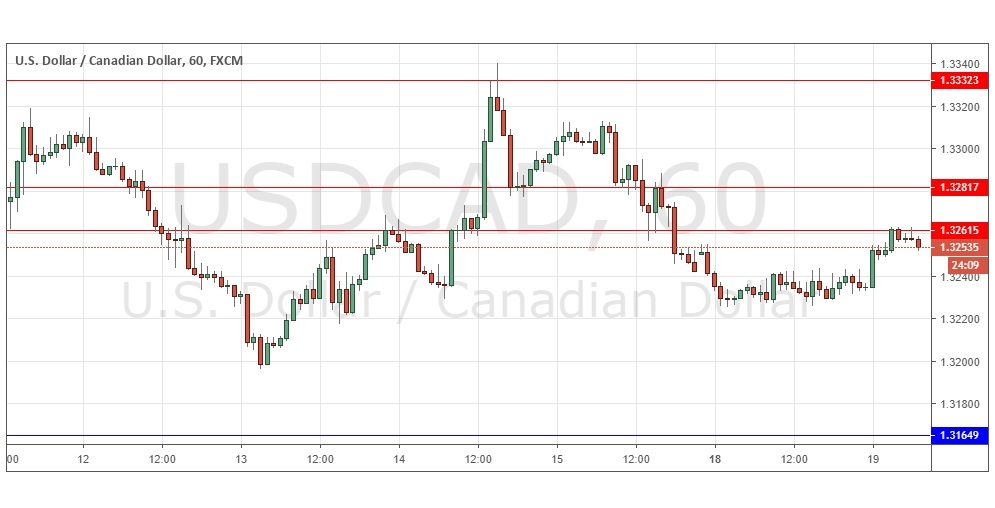 There is nothing of high importance due today regarding either the CAD or the USD.