Market Update: The U.S. stock market finished the day higher as the S&P 500 ETF (IVV) closed up 0.05%. Long-term Treasuries were also positive as 10-year yields dropped 4 basis points. The dollar was stronger on the day, up 0.08%. Gold and oil were both up as well. Copper finished lower by -0.23% and emerging markets dropped -0.77%. 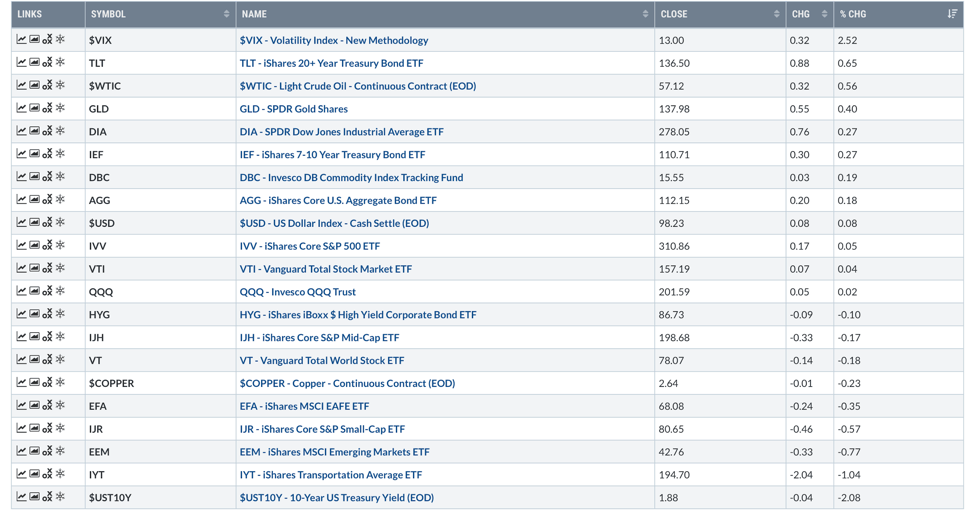 Economic Data: Yesterday the consumer price index was reported for the U.S. It came in up 1.77% year-over-year, demonstrating a continued slowing trend in inflation data. 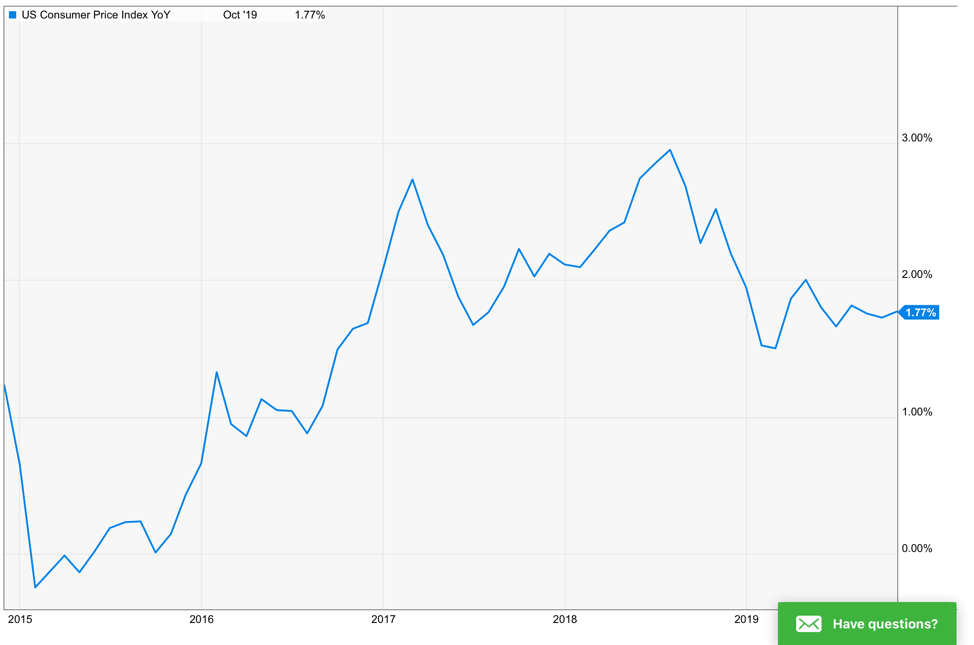 Low Volatility: Low volatility stocks led all factor exposures yesterday gaining 0.78% (SPLV). SPLV remains near all-time highs and has dominated other factors over the course of the past year. It remains above its rising 40-week moving average line and is in a strong positive trend.

Dividend Growth: Dividend growth equities remain strong as well due to exposures to the low volatility and high-quality factors. The VIG ETF is at an all-time high and remains in a strong positive trend.

Technology: The U.S. technology sector has been the strongest broad market sector over the past one year. It is now up more than the real estate and utilities sectors, which have maintained leadership for quite some time. The strength in technology shares is indicative of a flight to high quality balance sheets. XLK, the technology sector ETF, is at all-time highs and has made an impressive run.

Chart of the Day: Hindenburg! Not sure what to make of this chart, but I think it is telling us to watch out for a short-term correction in technology shares. All this FOMO has maybe caused the market to get a little ahead of itself. We will have to wait and see. Chart courtesy of sentiment trader. 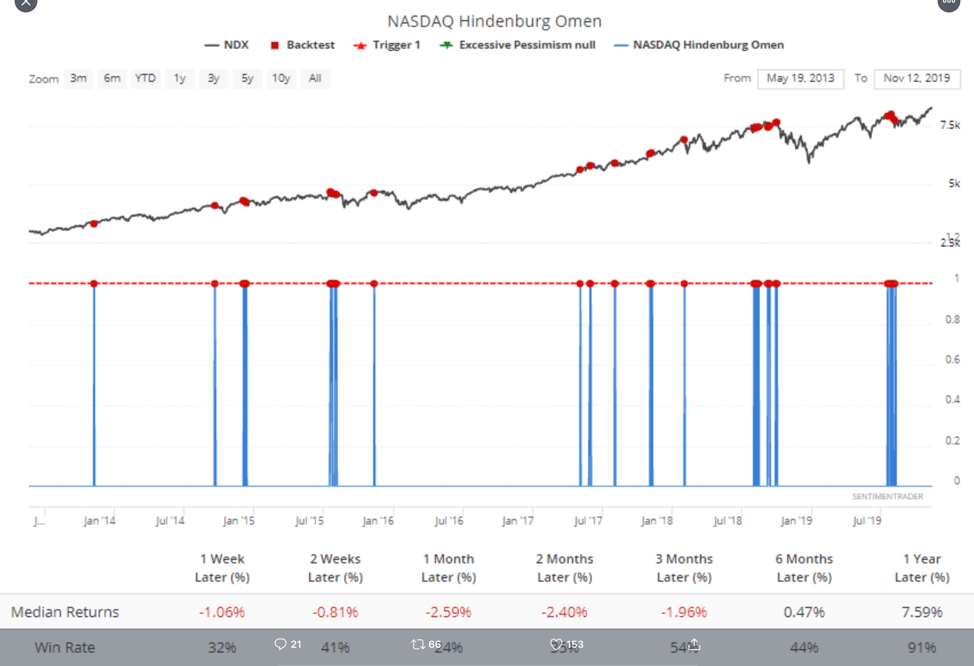 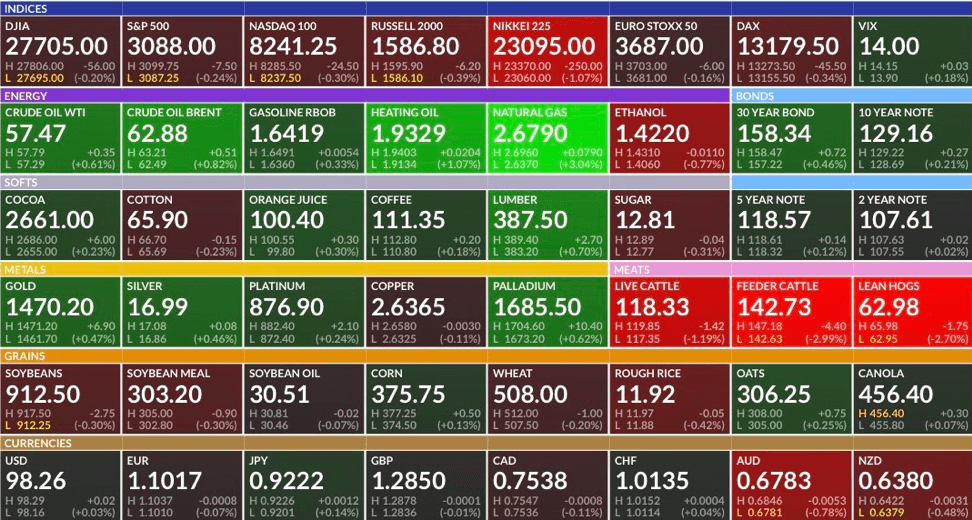 Elizabeth Warren slammed Goldman's response to claims of bias against women applying for the Apple Card. The firm's answer to the criticism was to ask customers to request a second look at their credit limit. Warren said the onus shouldn't be on women to straighten it out. If it's not open about the algo's design and its impact, "they need to pull it down."

Curfew confusion swirled in Hong Kong. China's state-owned Global Times deleted a tweet that said the city's government will announce a curfew this weekend. The tweet and deletion came after the authorities said schools are suspended through Sunday. Carrie Lam held a session with advisers and ministers last night, media reported, and may be mulling further measures. And cracks are starting to appear in Hong Kong's money markets.

U.S. and China trade talks are stuck. A U.S. demand that China detail how it plans to reach as much as $50 billion in agricultural imports annually has become a sticking point in negotiations on a phase one trade deal, people familiar said. Today, China lifted a ban on American poultry that began in 2015, saying it would allow imports from qualified suppliers, a small sign the nations are easing restrictions on imports. Here's how it went from method to madness.

U.S. equity-index futures and European shares edged down. Losses were modest as better-than-forecast German data eased growth concerns after bad news from Asia. Shares in the region slumped, though Chinese shares gained. Gold, the yen and oil rose. A Treasuries rally drove the 10-year yield to 1.84%.

Following a bearish opening gap, AUD/USD has recovered ground and trades above 0.6950, tracking the bounce in the S&P 500 futures. The bulls shrug off US-China tensions and the worsening coronavirus situation in the US and Australia.

Gold hovers above $1,800 as dollar drops despite lingering coronavirus concerns

Gold rises 0.30% as the dollar index drops 0.20%. The US stock futures rise, keeping the safe-haven US dollar under pressure. The US coronavirus cases tally crosses the 3.3 million mark.

Risk appetite took a turn for the better at the end of last week despite an array of the usual suspect risk factors (accelerating Covid-19 cases, US-China tensions, rich valuations).