Is the US headed for a recession? Equity markets think so and currency traders seem to agree. Credit markets are torn between the Federal Reserve’s declared intentions and a suspicion that a recession would put paid to the central bank's tightening policy.

Markets speculate, that is their purpose. As economist Paul Samuleson once said, “the stock market has predicted nine of the past five recessions.”

What does the economic data show?

The S&P Global Manufacturing Purchasing Managers’ Index (PMI) for the US is forecast to drop to 57.9 in May from its seven-month high of 59.2 in April. The index for the services sector is expected to slip to 55.4 from 55.6 in April, a three-month low.

These indexes are sentiment surveys that ask purchasing managers to rate business outlook  on a scale with the division between expansion and contraction at 50. The greater the distance from the dividing line the stronger the conviction.

Business optimism has declined over the past six months. The manufacturing PMI averaged 61.3 from May 2021 to October. In the next six months the average dropped to 57.8.

On the services side the May to October average was 60.6. From November to April it was 56.2.

While the concurrent declines are notable in both indexes, they remain firmly in expansive territory. Business optimism may have slackened but it is a long way from becoming negative.  In manufacturing, the most recent six-month average is above all scores for the past decade except those six months immediately preceding it.

If there is recession coming, business managers’ are not seeing it.

The US labor market is incandescent. Payrolls have added 515,500 jobs a month since October. In March and April the unemployment rate was 3.6%, just 0.1% above the record for the past two decades.

Initial Jobless Claims have climbed from their record low of 167,000 early April. But with the latest week at 218,000, there is no evidence of the rising job losses associated with an impending recession or the artificial firings of the lockdowns two year ago. 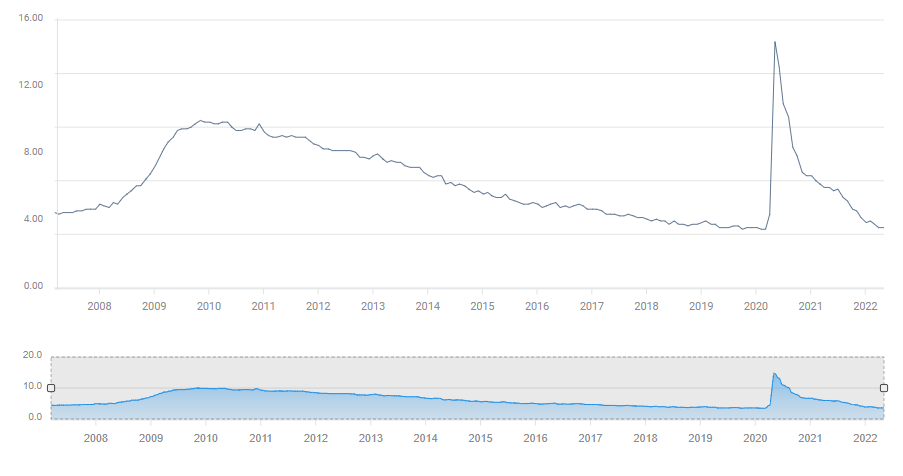 Consumers have maintained an impressive level of nominal spending over the past six months despite the vault of inflation to over 8% annually.

Retail Sales have averaged 0.95% for the six months from November to April. Personal Consumption Expenditures (PCE) from the Bureau of Economic Analysis (BEA), a broader measure of consumption, have measured 0.92% for the same period.

Those excellent results are somewhat deceptive as both the sales and expenditure figures include price increases in their calculations. Real PCE, also issued by the BEA, but corrected for inflation, shows a different story. The six-month average through March is just 0.17%, over 80% less than the unadjusted number. While the consumer continues to fund the expansion, real spending, and its economic impact is much weaker than the headline sales figures.

The April PCE and Real PCE data will be released this Friday.

Recession: Markets and the Fed

Recent economic data is not recessionary. That does not mean markets are irrational.

Market concerns are twofold. Will inflation cause the US consumer, the one essential factor in the economy, to pull back on spending?

At some point the increasing costs of necessities, food and energy in particular, should force families to cut back on discretionary spending. So far that has not happened but the possibility is strong. The longer inflation continues at its current level, the greater the cumulative drain on household resources and the greater the likelihood of a drop in consumer spending. With real spending far lower than nominal consumption, it would not take much of a decline to drop into contraction.

The second worry is the Fed's rate program. The fed funds rate is expected to reach a 3.0% upper target by year end. Will such a rapid increase cut far enough into economic activity to promote a recession? In one example of sensitivity, sales of existing homes, 90% of the US market, have fallen 13.4% since February as mortgage rates have soared. Sales of new homes have fallen 9%.

It is true that all recessions of the last 50 year have been preceded by a Fed tightening regime. However, not all of the central bank’s rate hikes have led to recessions, though the odds are heavily on the causal side.

Historically, the Fed increases interest rates to cool off an overheating economy characterized by rising inflation. That is not the case now.

The economy contracted 1.4% in the first quarter. Estimated growth in the second quarter is 2.4% in the Atlanta Fed’s GDPNow model. This is not an inflationary expansion.

Current inflation is due to a spending explosion from Washington larded on an economy beset with supply and labor shortages. Exacerbating the problem has been a tripling of crude oil prices over the past 18 months. Oil is the basic commodity of industrialization, its tentacles are in every product and service of the modern world.

Because US and global economic growth is relatively weak, much lower than the traditional launch point for Fed rate hikes, there is far less cushion to absorb the higher interest costs. The worries that the Fed could crush enough rate sensitive businesses to push the overall economy into recession are logical if not guaranteed.

The risk profile for May's PMI release is skewed to the downside, mirroring the markets’ concerns over recession. The larger the miss on May's PMI, the greater the negative impact on equities and Treasury yields. The dollar reaction will be a contest between falling Treasury rates that tend to push the greenback down and the safety trade, which encourages buyers. The greater the miss on PMI, the more favored will be the safety trade.

Index results at forecast or better will bolster equities and Treasury yields.The dollar will see the opposite contest, boosted by rising Treasury yields and diminished by the retreat of the safety trade.