For the moment Americans are depressed but consolable.

Consumer sentiment last month was the worst in almost a decade but depression did not keep anyone home. Consumer spending saw the largest gain in ten months. In fact, if you leave out the four months of pandemic distortion, it was the biggest single month jump in consumption in three decades. A red-hot job market and the receding pandemic seem to have blunted the damaging impact of the highest inflation in a generation.

The US economy has given the Federal Reserve reason to hope that it will be healthy enough to bear a strong dose of inflation medicine over the next year. Current expectations in the futures markets, and they change daily with the tensions in Ukraine, are for five 0.25% hikes in the fed funds rate by the December 14 Federal Open Market Committee (FOMC) meeting. The first increase will come at the March 16 conclave, but whether a quarter or half point is expected  depends on the latest bulletins from Kyiv and Moscow.

Retail Sales rose 3.8% in January, nearly double the 2% consensus forecast and a sharp rebound from December's revised 2.5% loss, originally -1.9%. The Control Group jumped 4.8% last month, well ahead of the 1% estimate. The initial December release of -3.1% was revised down to -4. 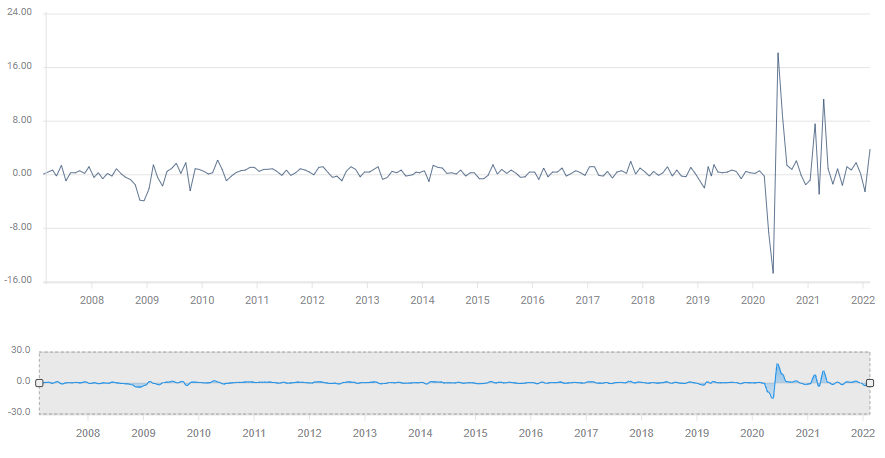 Sales are not adjusted for price changes. The Consumer Price Index (CPI) rose 0.6% in January providing a rough estimate of the inflation contribution to the sales figures.

Nonfarm Payrolls performed far better than expected in January. Employers hired 467,000 workers, triple the 150,000 forecast. More importantly, job creation in the fourth quarter nearly doubled when corrected by the Bureau of Labor Statistics’ (BLS) annual revisions. From 940,000 in the initial version, the BLS adjustments listed 1.894 million hires, 611,000 per month. The US labor economy is still short about 2.5 million positions from its February 2020 level.

Wages were also well advanced on predictions. Average Hourly Earnings (AHE) rose 0.7% in January from 0.5% in December. Though annual wages climbed 5.7%, consumers lost 1.8% in purchasing power to the 7.5% inflation rate. 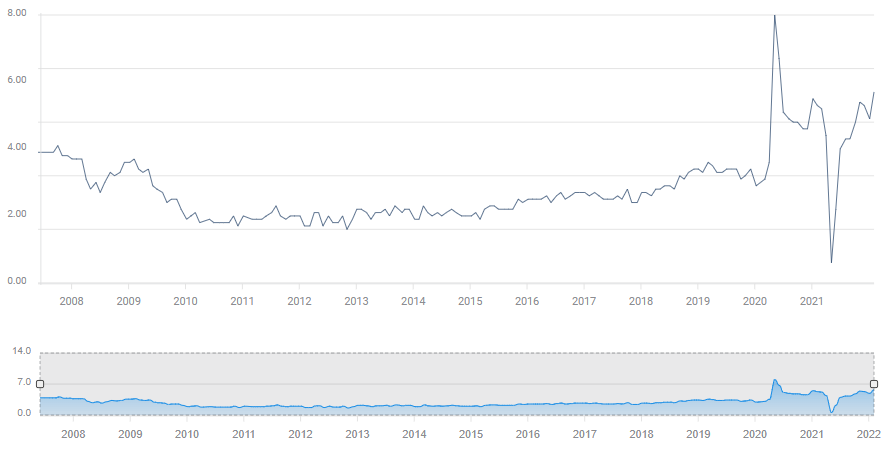 Consumer Sentiment in the Michigan survey dropped to 61.7 in January, its lowest since October 2011 and well below the pandemic bottom of 71.8 in April 2020.

American consumers are the US economy, accounting for about two-thirds of GDP. The revival of consumer spending in January after a 0.5% drop in the third quarter will be a relief to the Fed governors, indicating that inflation has not yet done extensive damage to consumer finances.

The minutes of the January 26 FOMC meeting were a pean to the Fed’s new price consciousness. Inflation was mentioned 73 times in the text, surely a record. Participants were recorded as favoring a significant reduction in the balance sheet given the “high level of Federal Reserve securities holdings.”  No suggestion was forwarded as to the timing or size of the expected reduction or whether it might be a passive roll-off or active sales. No clue was provided to the first order market question, will the March rate hike be 0.25% or 0.5%.

Within the context of higher rates, the Fed is keeping open as many options as possible.

A sustained drop in US consumption, whatever its source, could make a Fed rate campaign against inflation difficult or impossible. If consumers pull back on spending and GDP falls, higher interest rates would quickly become untenable in a declining economy.

So far US households have not retreated and the economy remains strong, 6.9% annualized in the fourth quarter. But inflation is a constant threat as it channels expenditures from discretionary to necessities. The tight labor market is the reason for consumer willingness to spend even if wages are steadily losing ground to inflation.

Treasury yields have fallen modestly from their recent highs underlining the chief threat to the Fed’s rate program– the Russian dispute with Ukraine.

Left to itself the US economy should be able to maintain more than sufficient growth this year to enable the Fed’s increases. However, a Russian invasion of Ukraine would send oil and commodity prices soaring and disrupt a still fragile global recovery, quite possibly fomenting a US recession while it stoked inflation.

The Fed has every reason to keep a wary eye on Ukraine and cross its collective fingers.