Historically, how impactful has the US jobs report been on gold’s valuation? In this article we present results from a study in which we analyzed the XAU/USD’s pair reaction to the previous 17 NFP prints*.

We present our findings as the US Bureau of Labor Statistics (BLS) gets ready to release the November jobs report on Friday, December 3. Expectations are for a 550,000 rise in Nonfarm Payrolls following the 531,000 increase in October.

*We omitted the NFP data for March, which was published on the first Friday of April, due to lack of volatility amid Easter Friday.

We used the FXStreet Economic Calendar for data on deviation as it assigns a deviation point to each macroeconomic data release to show how big the divergence was between the actual print and the market consensus. For instance, the August NFP data missed the market expectation of 750,000 by a wide margin and the deviation was -1.49. On the other hand, February’s NFP print of 536,000 against the market expectation of 182,000 was a positive surprise with the deviation posting 1.76 for that particular release. A better-than-expected NFP print is seen as a USD-positive development and vice versa. 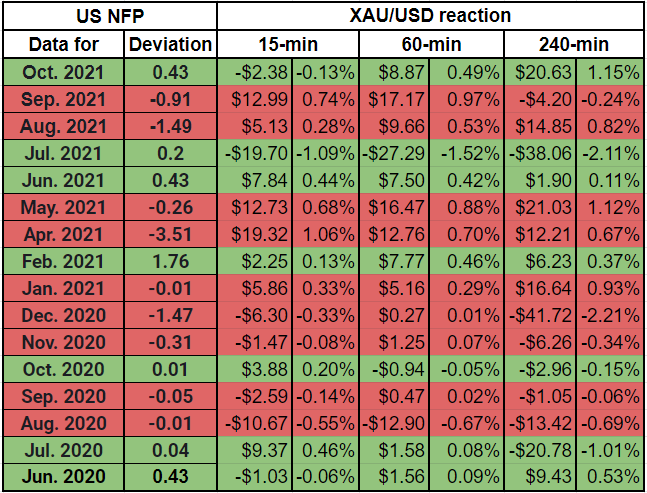 There were nine negative and seven positive NFP surprises in the previous 16 releases, excluding data for March 2021. On average, the deviation was -0.89 on disappointing prints and 0.47 on strong figures. 15 minutes after the release, gold moved up by $3.89 on average if the NFP reading fell short of market consensus. On the flip side, gold gained $0.03 on average on positive surprises. This finding suggests that investors’ immediate reaction is likely to be more significant to a disappointing print.

EUR/USD slips to near 1.0450 ahead of Eurozone HICP and US ISM PMI

EUR/USD has recorded a minor correction after hitting a high of 1.0489 on Thursday. The major is expected to remain on the sidelines as investors are awaiting the release of the US ISM PMI and eurozone Harmonized Index of Consumer Prices (HICP).

Gold bears eye $1,787 as recession fears amplify ahead of US ISM PMI

Gold Price stands on slippery grounds as it slides to the lowest levels since early May, around $1,797 by the press time of early Friday morning in Europe. The yellow metal drops for the fifth consecutive day amid fears of escalating inflation and economic slowdown.

Shiba Inu price embarked on a massive uptrend after bottoming on June 19. The ascent faced issues and headwinds, leading to an eventual retracement.