Despite the threat of new business and social restrictions in several states and a two-week increase in initial jobless claims, managers appear to be heeding the strongest influx of new orders in a decade in determining hiring.

Nonfarm payrolls, the most comprehensive employment listing for the US labor market, are forecast to increase 481,000 in November for the seventh straight month of gains. The unemployment rate (U-3) is predicted to fall to 6.8%. Average Hourly Earnings are expected be stable at 0.1% on the month and to drop to 4.3% on the year from 4.5%. Average Weekly Hours are projected to be unchanged at 34.8. The Labor Force participation rate was 61.7% in October.

Recent economic data from Purchasing Managers Indexes suggest that the third quarter's 33.1% annualized recovery from the 31.4% lockdown plunge in the second has been sustained at a strong pace in the final three months of the year.

Purchasing Managers Indexes (PMI) from the Institute for Supply Management show continuing strong expansion in in the manufacturing and service sectors of the economy and exceptionally robust incoming orders.

Manufacturing PMI slipped to 57.5 in November from 59.3 in October, eliding the 58 forecast, but the six-month average of 55.8 is the highest in two years. Employment dropped below the 50 expansion-contraction demarcation to 48.4 just one month after the first positive reading at 53.2 in over a year.

Service sector PMI dropped to 55.9 in November from 56.6 just missing the 56 forecast. Here also the six-month average of 57.1 is the best in two years. Employment unexpectedly expanded with the index rising to 51.5 from 50.1, improving on the 50.9 consensus forecast. It was the third positive month in a row after six negatives that began in March. 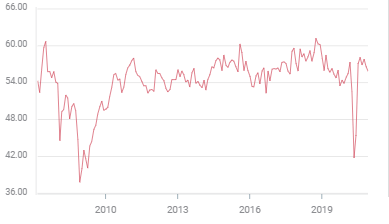 Manufacturing accounts for about 15% of US economic activity the balance is the service sector.

In the most important category for gauging future economic activity, the Manufacturing New Orders Index came in at 65.1 in November following October's 17-year record at 67.9. The result was far better than the 53.4 forecast, keeping its excellent six-month run intact and again belying analysts' gloom.

Since the recovery began in earnest in June economists have had difficulty judging the the amount of new business being generated. The manufacturing index has averaged 63.1 from June and has beaten its consensus estimate by an average of 14.8 points each month.

November's Services New Order Index dropped to 57.2 from 58.8 but it was vastly better than the 49.2 forecast. The Services New Orders Index has had a similar disparity between figures and forecasts. The six-month average from May is 60.6, the forecast average is 51.5, a difference of 9.1. 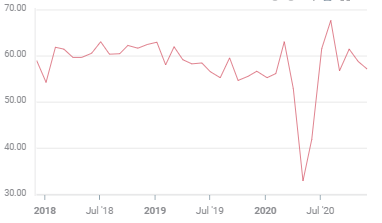 Managerial wariness about hiring as portrayed in the Employment Indexes has not restrained actual job placement. Even though it took five months of expansion and the strongest new orders figures in almost two decades before the the Manufacturing Employment Index reached 50 in October, managers sought new workers throughout. The same caution in the service sector, where the Employment Index rarely falls into contraction, did not inhibit replacing many of the workers fired in March and April.

The 10.7% rise in unemployment filings from November 6 to November 20 had raised concerns that the economic battens put in place in the last month were reversing the steady improvement in layoffs.

These November weeks were not the only increases in claims in the pandemic economy nor were they the largest. Claims jumped 127,000 in two weeks from July 10 to July 24 and again in August filings rose 133,000 in one week to August 14. But the November jump was coordinated with a potential cause, the new pandemic lockdowns. In summer the pandemic was quiescent, there were no new closures to blame for the layoffs.

In the event, initial claims behaved exactly as they had in the summer, with the latest November 27 week reverting to trend at 712,000, by 1,000 the second lowest of the pandemic. 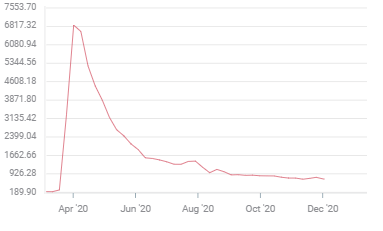 Conclusion: GDP and the dollar

The strong performance of incoming business orders is borne out in the Atlanta Fed GDPNow estimate for 11.1% annualized growth in the fourth quarter. If the expansion continues at even one-third that rate, with the end of the pandemic on the horizon, businesses will soon step up hiring. In the current environment they are unlikely to pull back.

Currency markets have treated the improving pandemic and economic news as a continuation of the risk-on dollar lower theme of the the last eight months.

If NFP is better than predicted, it will enhance that view, if not it will be ignored. The dollar is in the unusual place of standing to be damaged by good US economic news.

AUD/USD rides the reflation wave higher. The aussie reaches the highest since February 2018. Surge in commodities complex underpins the AUD.