The US labor market’s stars are aligned for April.The economy is expanding rapidly, employers are confident and consumers eager to throw off the restraints of the past year.  Shortages of skilled workers and the supply of parts and materials available for manufacturing are the only immediate impediments to the best hiring binge in eight months.

Nonfarm Payrolls are forecast to climb 978,000 in April following an equally strong addition in March. The Unemployment Rate (U-3)  is expected to drop to 5.8% from 6%. Hourly Earnings are projected to rise 0.1% on the month but fall 0.3 annually as lower paid workers return to their jobs. Average Weekly Hours should be unchanged at 34.9.  The Labor Force Participation Rate was 61.5% in March and the Underemployment Rate (U-6) was 10.7%.

Payrolls added 1.617 million jobs in the first three months of the year, 916,000 in March alone, for the best performance since August and September last year. Each month in the quarter was far ahead of its forecast with hiring almost double the combined predictions of 879,000.

Even with the unexpected first quarter jump in job creation American firms have rehired only 62% of the 22.362 million people laid off in March and April 2020. By the NFP count, 8.403 million people are still out of work from the economic imposition of the lockdowns.

Looking at the labor market from the other direction, this means that as the economy reaches full recovery millions of jobs remain unfilled.

First quarter GDP expanded at a 6.4% annualized rate, nearly equal to the Federal Reserve’s January projection of 6.5% for the year.

The Atlanta Fed GDPNow model’s current estimate for the second quarter is 13.6%. That is high and will come down as more data becomes available. The Fed will issue its own updated projections after the June 15-16 FOMC meeting.

Automatic Data Processing (ADP) is the country’s largest payroll services firm. Its clients hired 742,000 new workers in April, slightly fewer than the 800,000 predicted by economists. March gained 48,000 to 565,000 on revision.

Even with the miss April was the best month since last September. The March and April average of 654,000 was the strongest since the original lockdown rebound in May and June last year.

Optimism in the factory sector has had an excellent six months, the best in almost three decades. Executives have responded to the general anticipation that the US economy will expand more than 6% this year and to the specific encouragement of ten months of strong incoming orders.

The Manufacturing Purchasing Managers’ Index (PMI) from the Institute for Supply Management (ISM) averaged 60.62  for the six months to April, the best sustained half-year since March 1984.

The New Orders Index averaged 65.2 over the same half-year and just a trifle less, 64.6 over the last ten months, which is the highest comparable period since August  2004.

In April, the overall manufacturing index had been forecast to move up to 65 from 64.7 and employment to rise to 61.5 from 59.6. The New Orders Index had been projected to fall slightly from 68 to 66.6, as it was anticipated that  parts and raw material supply constraints would cut into manufacturing output.

The problem for many factories is not a lack of business but, in the words of the ISM report,  “wide-scale shortages of critical basic materials, rising commodities prices and difficulties in transporting products.”  “Worker absenteeism... and difficulties in filling open positions continue to be issues that limit manufacturing-growth potential.”

Even with these constraints, each of these measures remains well above the 50 division between expansion and contraction.

Though the expectations for continued improvement were overstated in no sense have the indexes reversed. The optimism in the manufacturing sector is undiminished.

Here again, the six-month tracks in three of the four indexes are the best in years.

As in the manufacturing sector, the Employment Index turned in the weakest performance. At 54 in April, the six-month average has just returned to its level in the middle of 2019.

The modest declines in the three functional manufacturing indexes and in two of the service indexes are deceptive.

The decreases do not presage a shift in optimism brought on by changing economic conditions but stem from lingering supply problems and perhaps, a measure of executive frustration at employee reluctance to return to work when subsidised by extensive unemployment benefits.

In contrast, the US economy seems likely to accelerate in the second quarter as more of the globe’s economy leaves pandemic stasis.

Business attitudes in most of the ISM measures were at or beyond the levels before the pandemic, some were the most optimistic in decades. A decline from those heights is indicative of realistic optimism not fear.

The dollar has been closely allied to Treasury interest rates since January.

Even though yields have risen sharply this year, anticipating a stronger economy, Federal Reserve Chair Jerome Powell made it clear after the March FOMC meeting the governors were not satisfied.

His call for ‘substantial further improvement’ helped put a brake on the steepening of the yield curve.

The 10-year Treasury yield which closed on March 31 at 1.746% has lost 19 basis points to 1.575% by mid-day on Thursday in New York. The dollar has retreated in tandem with yields. 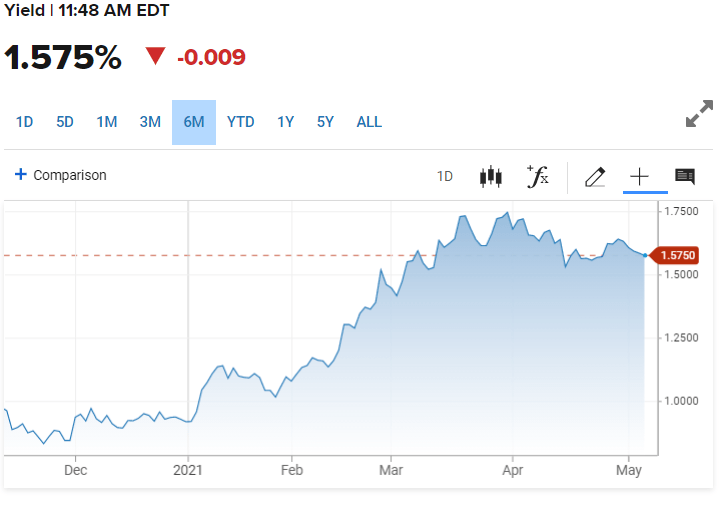 One of the first steps to that improvement would be a strong April NFP report.

As Mr. Powell said in his FOMC press conference, “We have had one good jobs report, that is not enough.”

Unless there is an unexpected development in the course of the pandemic the next policy move from the Fed will be a reduction of its  bond purchases from the current $120 billion a month. It is the credit market speculation on the timing of thataper that the Fed is doing its best to discourage.

Every statistic that brings the economy closer to the bond taper supports the dollar. Currency response to NFP will be linear, the higher the payrolls, the better for the dollar.

The chief impediment to hiring, at least in manufacturing, is availability of workers and production supplies.

Service employment has few such inhibitions and a plentiful supply of labor. Job creation in services should be vibrant enough to overcome any drag from factory work.

Business optimism is at a level rarely seen in the US. The waning pandemic has lost most of its terror and the economy is set to grow at a rate not seen in a generation.

The US worker will  be the direct beneficiary.