The US manufacturing sector has lost its heady spring expansion as firms and workers wait for the supply chain to unkink and for the pandemic to lose its grip on consumer attitudes.

Purchasing Managers Indexes (PMI) from the Institute for Supply Management (ISM) are expected to show little change in November, with the overall gauge to rise to 61 from 60.8 in October. 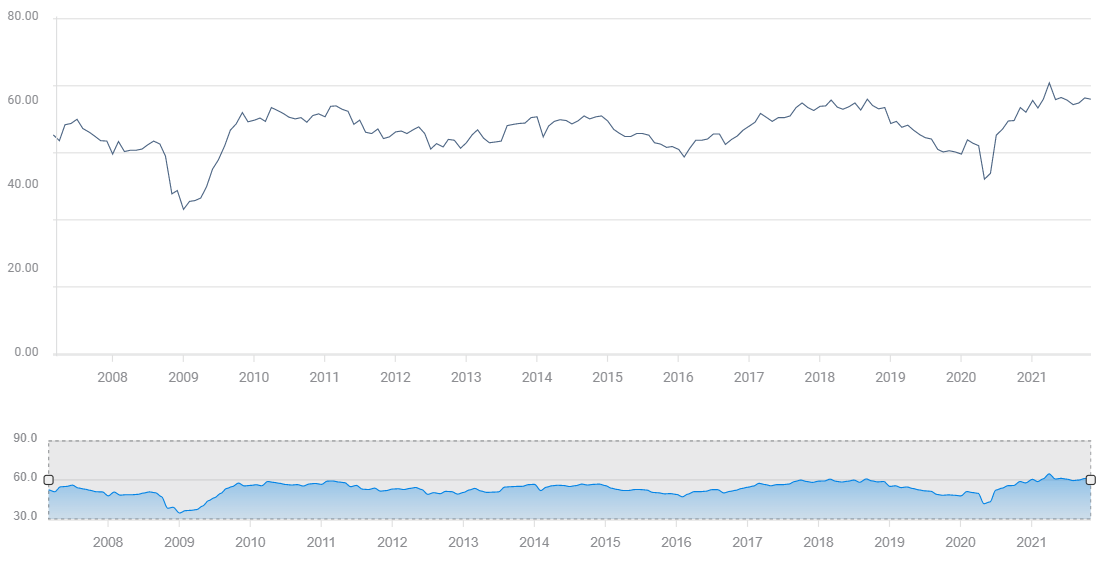 New Orders dropped sharply last month to 59.8  from 66.7 in August and September. It was the lowest score for this crucial measure of incoming business in 16 months and the first reading below 60 for that period. 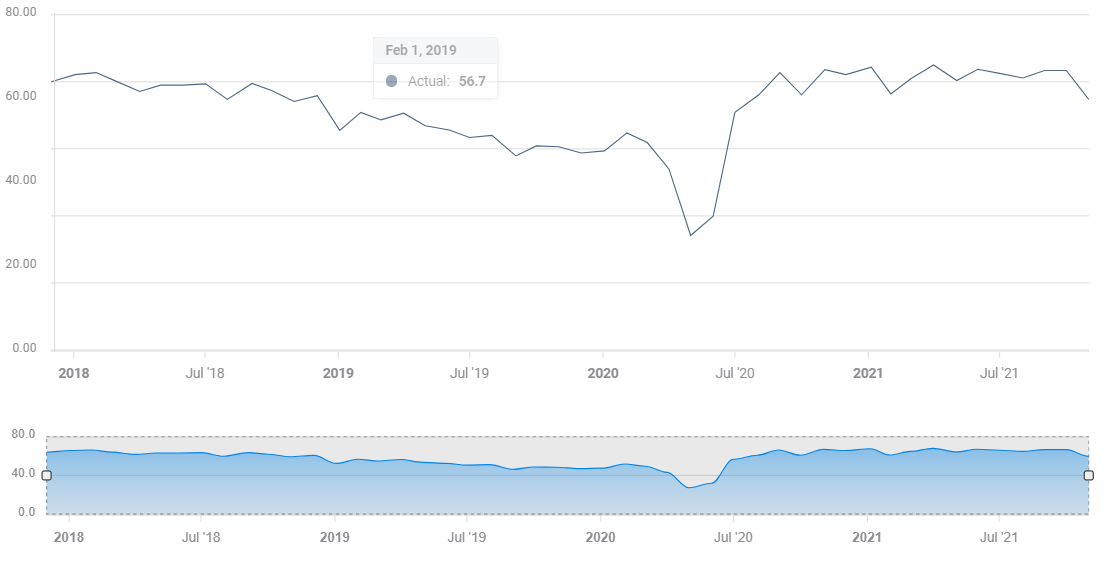 The Employment Index registered 52 in October, a three-month high and has averaged 50.8 over the half-year. The pandemic top was 59.6 in March.

Inflation has put the spotlight on the Prices Paid Index which tracks the purchasing costs of manufacturers. Price pressures have eased since the index reached 92.1 in June. October’s release was 85.7 and the six-month average is 85.4.

The US economy is heavily dependent on consumer spending, 70% is the figure normally ascribed to the consumption role in Gross Domestic Product (GDP). Historically, consumer optimism is directly related to spending. Over the past several months that link has weakened.

Americans are unhappy, that is clear from the University of Michigan Consumer Sentiment Index, but families and individuals have continued to spend liberally.

The Michigan Index plunged from 81.2 in July to 70.3 in August and has averaged 70.6 for the months since that late summer tumble. These are some of the lowest optimism readings in over a decade and are comparable to the scores in 2010 and 2011 when the economy was still recovering from the financial crisis.

Despite the distress many Americans expressed in the confidence and sentiment surveys, consumption has remained strong.

Personal spending has averaged a 0.70% monthly increase for August through November. In comparison, in 2019, the last full year before the pandemic, Personal Spending averaged 0.36% monthly.

In 2019 unemployment was at a record low for much of the year, wages for many workers were rising at the highest pace in a generation and inflation was below 2%.

Yet despite those excellent economic conditions, and with the Michigan Survey averaging 96 for the year,  consumers were only about half as active then as in the past four months.

Retail Sales and Personal Spending are the numbers that inform the manufacturing and services PMI outlooks and despite the carping media background, they remain strong.

The biggest potential problem for consumers is that wages have not equaled inflation.

Average Hourly Earnings (AHE) have averaged a 3.86% annual increase each month since April. Unfortunately, the Consumer Price Index (CPI) for the same period is 5.45%. The Personal Consumption Expenditure Price Index (PCE), the core version of which is the Fed’s chosen measure, rose 4.3%. Under either gauge, consumers are losing purchasing power every month..

Two other factors have made this year’s inflation more damaging to consumers than past bouts.

First, prices have ballooned in a near record time. Retail costs have more than quadrupled from 1.4% in January to 6.2% in November. In the second half of 2020, CPI averaged 1.25% and for almost all of the prior decade CPI was less than 2%. The United States has not seen this rate of inflation in a generation, no one is inured.

Second, the prices of many necessities have risen much faster than the overall inflation rate. One example is gasoline. This necessity for most American families has jumped 62% in a year.  Housing costs, new and used automobiles, meat, poultry, eggs and all forms of energy have advanced more than CPI.

Consumer attitudes have not been helped by the Federal Reserve. Bank officials have spent the last year reassuring markets, and by extension consumers, that the price increases would be limited and temporary. Fed Chair Jerome Powell has recently changed his mind, admitting that inflation has been more of a problem than expected.

The admission seems particularly out of touch with the American consumer reality as the bank switched to an inflation-averaging model last September, designed to let inflation run above the 2% target for an extended period.

Despite consumer optimism that in any prior year would have had analysts predicting recession and business executives reaching for the pruning shears, attitudes in the executive suites have stayed positive.

The reason is straightforward. Sales have been strong, new business has been the best in a decade. For many firms labor and supply shortages have inhibited production below the level of orders and permitted large scale price increases for the first time in a generation. Firms can look forward to several quarters of rising profits. Economic growth in the fourth quarter is estimated by the Atlanta Fed to be running at 8.6% annualized. 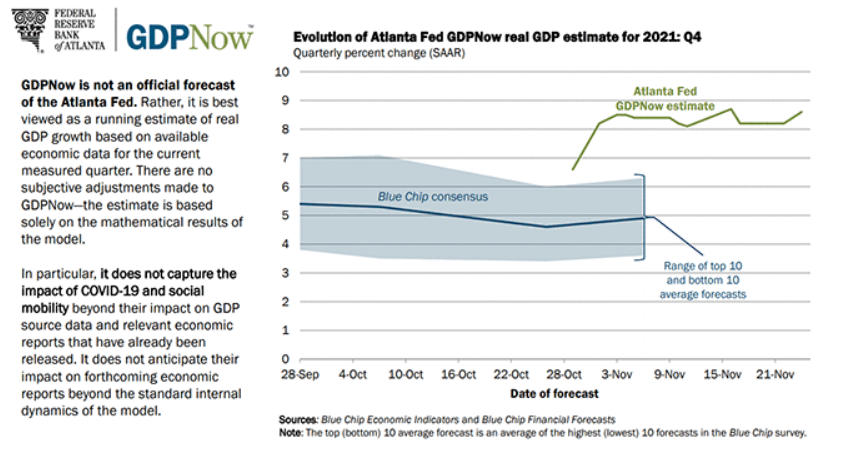 Business attitudes reflect the consumer. Until the consumer begins to pull-back on spending PMI’s should remain healthy if not strong.

The latest threat to the global recovery from the Omnicron variant is too recent to have any impact on these November figures. These numbers consequently are already retrograde and will have little import for the trading markets.