Initial jobless claims are moving in the wrong direction once again. At a time of rising global Covid cases with the fear that the US could eventually have to follow Europe in adopting more restrictions, such an outcome reinforces the case for more fiscal stimulus.

US jobless claims for the week of October 10 do not look good. Initial claims rose to 898k from an upwardly revised 845k (consensus 825k). They are obviously moving in the wrong direction, hitting the highest level since the week of August 21st and remain way above anything experienced during the Global Financial Crisis (peak was 665k the week of March 27, 2009). It is possible that recent airline job losses are the main upside factor in this report, but the general newsflow reinforces our concerns that there are major strains persisting in the jobs market.

Continuing claims fell sharply to 10.02mn from 11.18mn, but remember that is largely because people have exhausted the 26 weeks of unemployment benefit. Given the bulk of lay-offs happened in March and early April the pace of declines in continuing claims will slow in coming weeks. However, the number of people receiving Pandemic Emergency Unemployment Compensation rose 818k the week of Sepgtember 26 since that program provides an additional 13 weeks of unemployment benefits and there has simply been a transfer over to a different benefit. This suggests lacklustre employment growth in recent weeks. 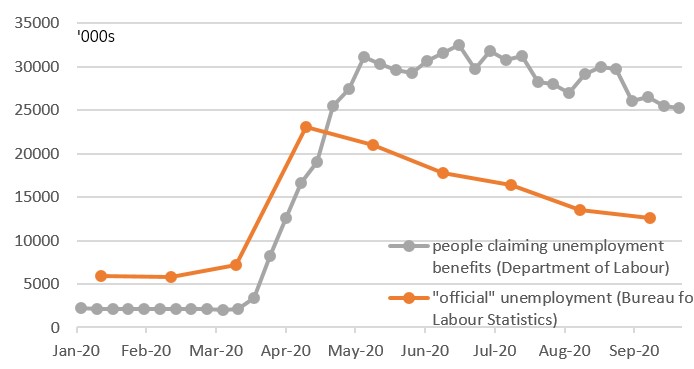 It is important to remember that the numbers don’t match up because there is a week lag between initial claims and continuing claims and then a further week lag for the total number of people on unemployment benefits. As of the week of September 26 there were 25.29mn people receiving some form of unemployment benefit versus 25.5mn the week before.

While there are issues relating to fraudulent claims, that are being investigated, the report is not giving us any uplifting news. We are also nervously watching what is happening in Europe where rising Covid-19 cases are prompting renewed containment measures that include, variously, closing bars/restaurants, introducing curfews, closing schools and limiting household gatherings. Should that come this side of the Atlantic there would potentially be even worse news for the US jobs market.

Either way, today’s report will embolden calls for additional fiscal stimulus and we expect that to be a key theme of Federal Reserve speakers over coming days. Unfortunately, we suspect this will fall on deaf ears, posing challenges for economic growth as we head towards year-end.