The second round of pandemic induced business closures in California, New York and a few other states has stalled the improving labor market and is threatening to reverse the fourth quarter economic recovery.

Several states, notably California with the largest economy, which has ordered all non-essential businesses closed, and New York which has banned indoor dining in New York City with its mayor threatening a total lockdown, have slowed improvement in labor market.

Other states, Florida and Texas instructively, remain open with far fewer COVID-19 cases and many fewer fatalities. No hospital system in the United States has been overwhelmed by the current wave of COVID-19 cases. Several states in the mid-West have seen their cases numbers peak two or three weeks ago.

The restaurant, hospitality and retail industries have been the hardest hit by the pandemic business closures. Even though many restaurant workers have probably lost their jobs as businesses closed, retail shops had returned to relatively normal staffing across the country until these latest shutdowns.

Claims first began to rise in early November. Initial filings rose from 711,000 in the November 6 week to 787,000 in the November 20 week. Market concern that this might be more than normal variation seemed misplaced when the following week, November 27, claims dropped to 716,000. 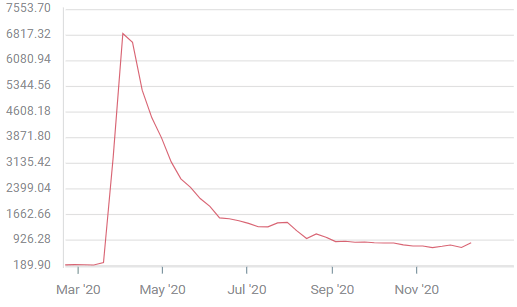 However, the subsequent week, December 4, claims reversed again to 853,000, the highest number of new requests claims in 11 weeks. Claims are again forecast to drop back to 800,000 in this report.

November payrolls added 245,000 workers the fewest of the seven-month recovery and just over half of the 469,000 consensus forecast. 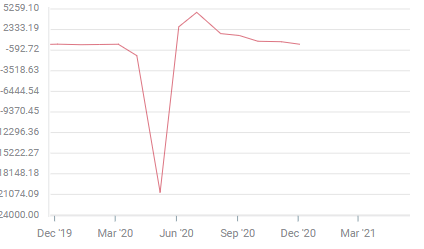 Before the November payrolls were released on December 4, a two-week rise in Initial Jobless Claims, the first since August, had warned that the labor market might be deteriorating under the pressure of the new business closures ordered by several states.

Consumer spending in November has confirmed the weakening economy. Retail Sales fell1.1%, its largest drop since April and almost tripling the -0.3% forecast. Sales ex-Autos slipped 0.9% on a 0.1% prediction and the Control Group fell 0.5%, missing its 0.2% projection.

November is the important lead for the holiday shopping season. With so many retail businesses in dire condition from the prolonged reduction in sales this report, confirming what most proprietors already know, confirms the bad news.

Conclusion and the market

The dollar has been battered by the economic slowdown in the United States. The return of labor problems and increases in unemployment claims, in addition to reporting the changes in the labor market, brings back the unpleasant shocks of March and April.  The greenback cannot recover until the facts change.