The US economy is showing signs of a burgeoning recovery and the Treasury market has responded by pushing the 10-year yield to its highest level in over a year.

Durable Goods Orders jumped 3.4% in January, far beyond the 1.1% consensus estimate and December's total was revised to 1.2% from 0.2%. Nondefense Capital Goods, the business investment proxy, rose 0.5% on a 0.7% forecast, but the December result more than doubled to 1.5% from 0.6%. This brings the fourth quarter average to 1.4% and the second half to 1.8%. 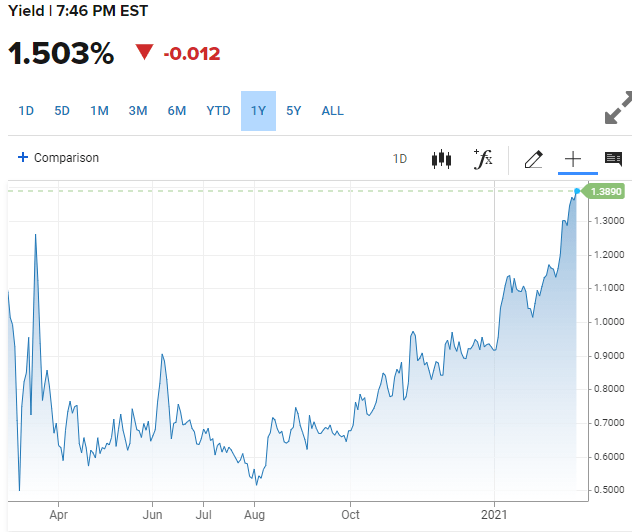 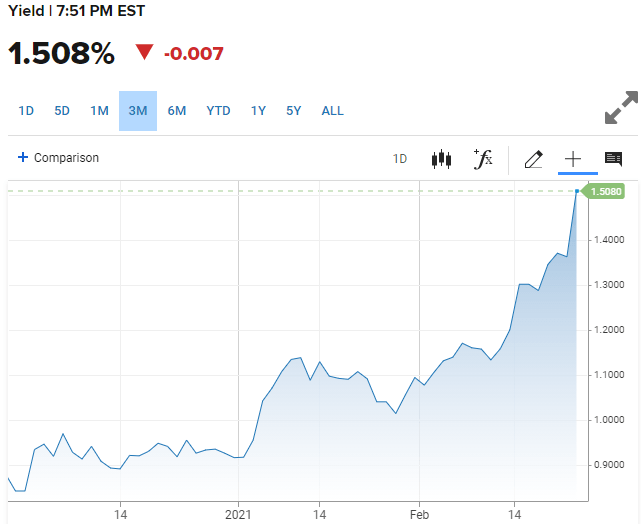 Inflation fears are one of the drivers of the Treasury market. The Producer Price Index, which measures primary market commodity pricing, more than doubled in January from 0.8% to 1.7%. 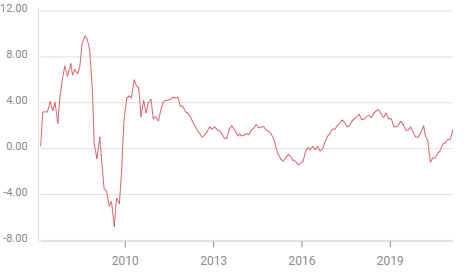 The Bloomberg Commodity Index (BCOM) surpassed its January 2020 level of 81.37 in the first week of February and at 87.12 has returned to the pricing of mid-2018. Oil is approaching its best price since 2018 and copper is near its 10-year high.

It will take time for producer and commodity prices to work their way through to the retail indexes but if the pressure continues it will be passed on to the consumer.

A more immediate impact is the price for a gallon of regular gasoline which has increased 18% this year in the nationwide average from $2.158 on December 28 to $2.549 on February 23. Part of this gain is due to the fracking ban on federal land instituted by the Biden administration in January but most is anticipated demand..

It is not just rising commodity expenses that are worrying credit markets. Consumption may be set to surge as the new stimulus package in Congress awards $1400 in individual and family grants. Judging by the 5.3% Retail Sales rocket in January, the combination of government gifts and the psychological release at the end of the pandemic could send consumer demand soaring.

When expansive consumers are combined with robust business spending, fast rising home prices, equities near record levels, and a commodity boom the ingredients are in place for a return of inflation.

That may be one reason that the Fed has been reluctant to directly criticize the rise in Treasury rates. Chairman Jerome Powell was politely adamant in Congressional testimony earlier in the week that the central bank would keep rates low as long as necessary for the economy to fully recover. He noted that there are no signs of inflation in the economy and that any increases would be “transitory.”

The Consumer Price Index and the Core Index did fall to 1.4% year-over-year in January, which is the lowest since June and 1% below the February 2020 rate. The Core Personal Consumption Expenditure Price Index (PCE), the Fed's preferred measure since Ben Bernanke was Chairman, was 1.5% in December and is expected to slip to 1.4% in January when it is reported on Friday. It was 1.9% last February. 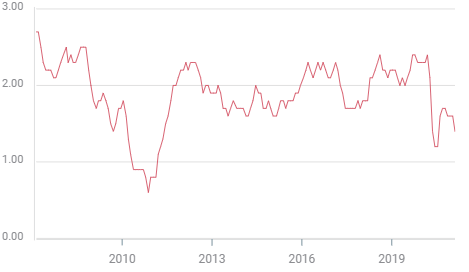 Mr. Powell said the Fed has no plans to reduce its $120 billion a month of bond purchases. However, that buying has not blocked the recent rate increases. Shorter term rates, where the Fed has been concentrating its efforts have not moved appreciably. The 2-year Treasury is up but six basis points to 0.178% this year.

Nor has inflation averaging, which became the official Fed policy at the September 2020 FOMC meeting, prevented the Treasury sell-off (rates move inversely to bond prices).

“The Committee will aim to achieve inflation moderately above 2 percent for some time so that inflation averages 2 percent over time,” said the FOMC statement.

If the Fed was hoping the inflation averaging policy would inhibit credit markets from speculating on rates it appears to have failed.

The Fed will certainly not raise the fed funds rate for many months if not years but the Treasury market will not stop selling bonds without more aggressive action from the FOMC.

For the time being, the governors may, though privately, welcome the modest rise in rates.

The inflation angle has already been noted but as important is the indication of confidence higher rates instill. Advancing rates go with an economy moving to self-sufficiency. With interest rates still at the low end of the historical spectrum the fed's main concern may be that the increases are gradual, measured and do not startle markets. The 2013 'taper tantrum' has been much discussed lately.

The dollar rose slightly against the euro on Thursday and at its 1.2163 close is placed about mid-way in its three-month range. Since early December it has been at the top of  its three-year price structure. 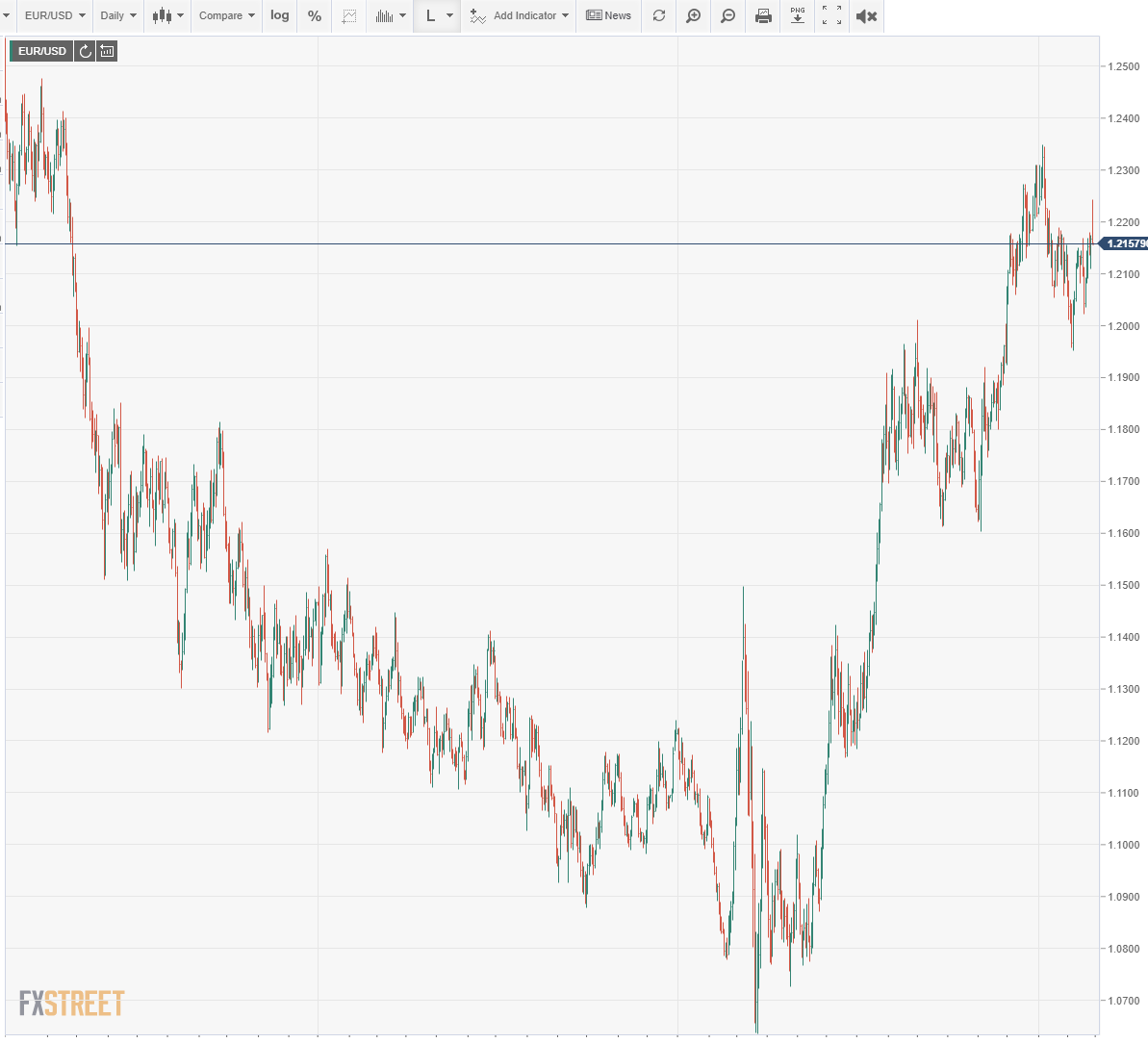 The USD/JPY has been more receptive to the improving real rate differential for the dollar. It closed at 106.27, the highest finish since August 27 last year. The January 27 reversal is well confirmed. 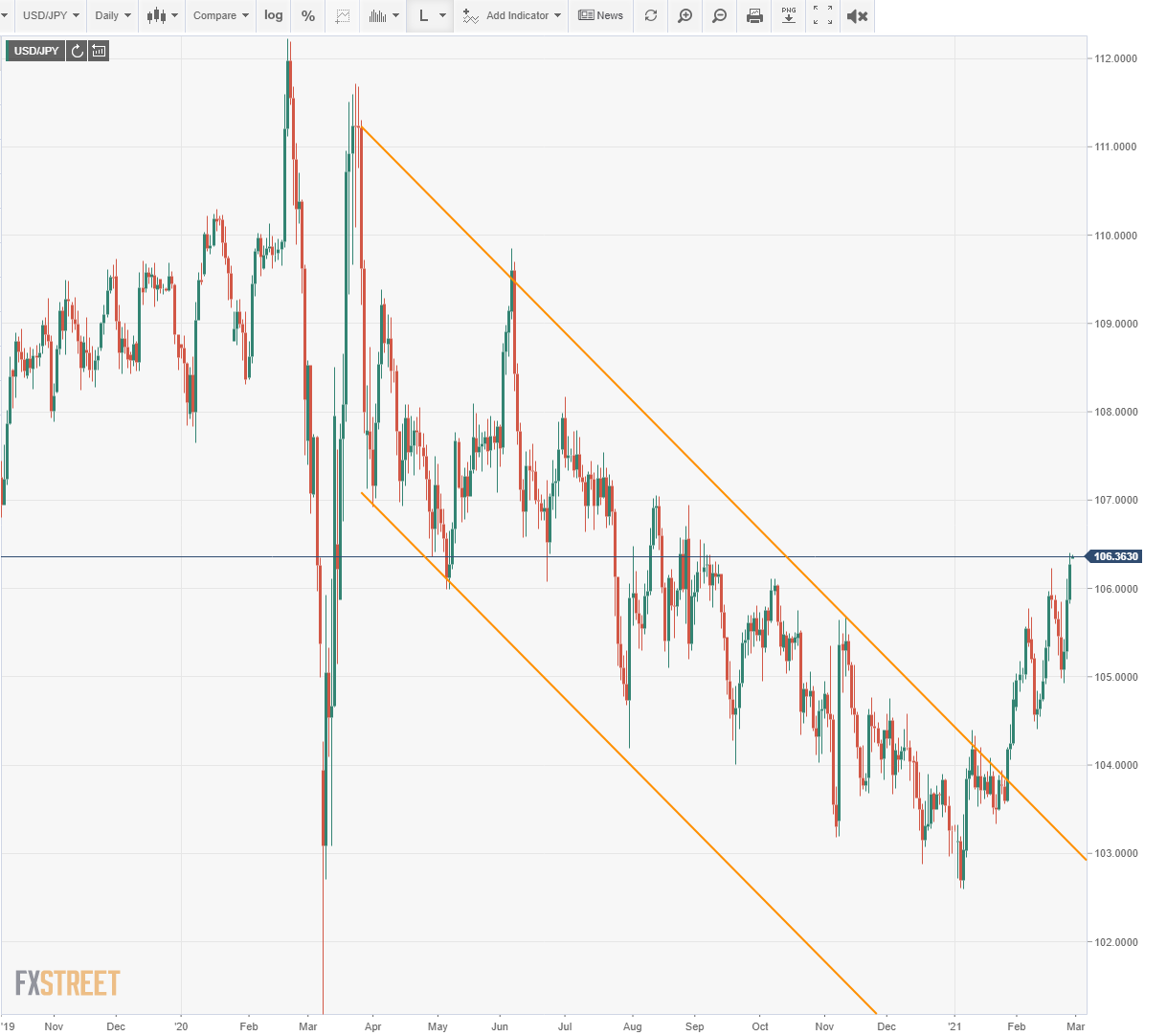 Other major pairs were mixed. The sterling fell more than a figure to 1.4007 on Thursday, but it is still up 10% in the last five months and 3% in February alone. The USD/CAD also gained a figure to 1.2610 but it remains at a three-year low, largely on the strength of the Canadian resource economy.

The concatenation of consumer demand, rising commodity prices and a powerful incipient recovery have created the potential circumstances for the first real bout of rising prices in many years.  Inflation may be only a possibility at the moment but it definitely has the markets' attention.