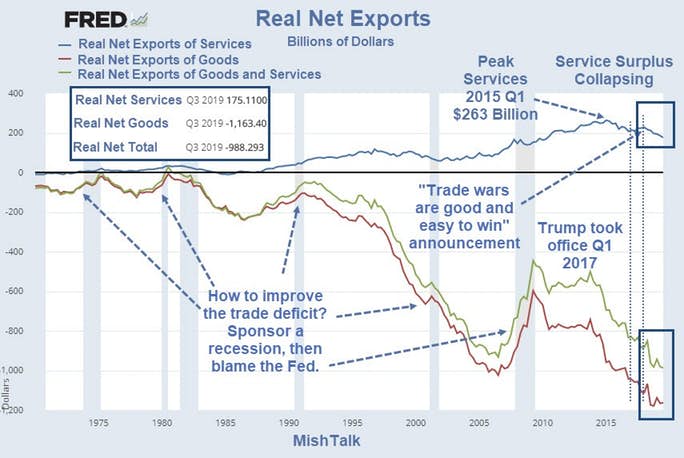 Please give that chart more than a quick glance. There's a lot going on that's worth a bit of reflection.

In particular, note the falling trendline in US service exports since 2015.

Neither Good Nor Easy to Win

Now let's reflect for a moment on one of my favorite Trump Tweets.

When a country (USA) is losing many billions of dollars on trade with virtually every country it does business with, trade wars are good, and easy to win. Example, when we are down $100 billion with a certain country and they get cute, don’t trade anymore-we win big. It’s easy!

While the U.S. usually runs a deficit in goods, it actually runs a surplus in services. Yet that surplus is shrinking. Exports of services barely rose in the first nine months of 2019, while imports rose 5.5%, the Commerce Department said. The services surplus, at $178.5 billion through September, was down 10% from a year earlier, on pace for its steepest annual decline since 2003. October data are due out Thursday.

The services pullback is significant because in the last half-century the U.S. has evolved from an industrial superpower into the undisputed champion of the global services economy. From 2003 to 2015, the U.S. trade surplus in services such as medical care, higher education, royalties and payments processing nearly sextupled to $263.3 billion.

The U.S.’s largest export isn’t cars or soybeans but spending by foreign visitors on food, lodging, tuition, health care and other items. These exports, collectively labeled “travel services,” were down 0.6% in the first nine months of the year to $160.5 billion.

The trade war with China appears to be taking a toll. U.S. immigration officials have ramped up scrutiny of visa applications by Chinese students, tourists and medical patients seeking treatment in U.S. hospitals. Beijing this year advised its citizens to reconsider visiting or studying in the U.S. due to heightened scrutiny at the border and frequent “shootings, robberies and thefts” on American streets.

In September, FedEx Corp. reported a drop in revenue and profit, and disclosed plans to retire or idle dozens of cargo planes due to rising trade tensions and a slowdown in the global economy. “Weakening global trade and industrial production have resulted in less-than-expected demand for our most profitable Express package and freight services,” Chief Financial Officer Alan Graf said in a conference call. “Adverse changes in international trade policies and relations would likely drive additional weakness in our business.”

It cannot possibly help.The global car industry is already faltering and Trump is hell bent on raising the price of steel and aluminum.

US Parts Not Needed

Why should anyone be surprised that manufacturing is suffering when there are headline news stories like this: China No Longer Needs US Parts in its Phones.

Q: How did that happen?

A: Trump cut off supplies so China looked elsewhere.

This was going to happen anyway but Trump accelerated the process.

It's true that the US can apply more tariffs on China than China can on the US. But losing less is not winning.

These trends started long before Trump. But that does not excuse Trump's economic ignorance.

The US has a massive budget deficit. It needs to import money. And the US has the world's reserve currency. Combine that with the end of gold standard and Trump is fighting a battle that cannot possibly be won by tariffs.

As I have pointed out before, this all goes back to Nixon.

After Nixon closed the gold window, there were no constraints on either trade deficits or budget deficits.

Gold provided a trade enforcement mechanism that cannot be fixed by tariffs, blaming the Fed, or throwing temper tantrums.

By trying to fix a problem that cannot be fixed by tariffs, Trump managed to escalate a decline in services that began in 2015.

It is likely not a coincidence that the acceleration in the decline of the US services surplus coincides with Trump's absurd announcement "Trade wars are good and easy to win."

Once again, tariffs cannot possibly be the answer.