US stocks wavered on Thursday ahead of the earnings season that kicks off today. The Dow Jones rose by over 100 points while the tech-heavy Nasdaq 100 index declined by about 80 points. The key companies that will publish their results today are Wells Fargo, Blackrock, Citigroup, JP Morgan, and First Republic. Analysts believe that most of these companies will publish strong results. For example, the median estimate is that JP Morgan’s revenue jumped to $29 billion while Citi and Blackrock had over $17 billion and $5 billion, respectively.

The US dollar moved sideways as investors reacted to the latest initial jobless claims and producer inflation data from the US. Data by the statistics agency showed that the headline producer price index (PPI) data declined from 9.8% in November to 9.7% in December. This decline was weaker than the median estimate of 9.9%. The core CPI, which excludes the volatile food and energy prices, rose from 7.9% to 8.3%, respectively. These numbers came a day after numbers revealed that consumer inflation rose to the highest level since 1982. Later today, the US will publish the latest retail sales numbers.

The British pound held steady against the US dollar ahead of the upcoming data dump from the UK. The Office of National Statistics (ONS) will publish the first GDP numbers of the year. Economists will be looking at the trends in the UK economy in the final months of 2021. The ONS will also publish the latest industrial and manufacturing production numbers from the UK. Economists polled by Reuters expect the data to show that manufacturing production declined from 1.3% in October to -0.3% in November. They also expect that industrial production declined to 0.5% because of fears over covid-19.

The GBPUSD pair has been in a strong bullish trend in the past few weeks. It is trading at a multi-month high of 1.3731, which is substantially higher than the December low of 1.3170. On the four-hour chart, the pair has moved above the 25-day and 50-day moving averages and the ascending red trendline. Oscillators like the Relative Strength Index (RSI) and the Stochastic have also been rising. Therefore, the pair will likely keep rising later today. 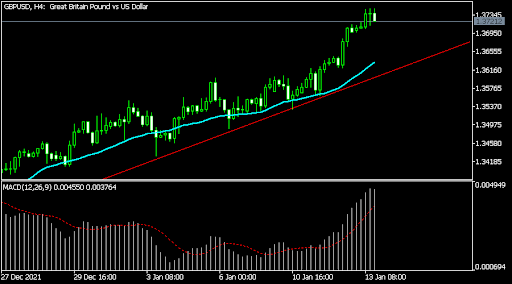 The EURUSD pair retreated slightly in the overnight session. The pair is trading at 1.1450, which is slightly lower than Thursday’s high of 1.1480. The pair is slightly below the key resistance at 1.1500, which is the 61.8% Fibonacci retracement level. It is also slightly below the upper side of the Bollinger Bands. Therefore, the pair will likely resume the bullish trend as bulls target the key resistance at 1.1500. 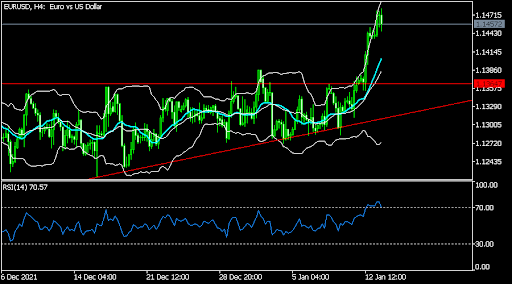 The EURCHF pair declined to a low of 1.0430, which was the lowest level since January 10. This price is below this year’s high of 1.0512. It moved below the 25-day and 50-day moving averages. It is also between the 50% and 38.2% Fibonacci retracement levels. Therefore, the pair will likely keep falling as bears target the key support at 1.0400. 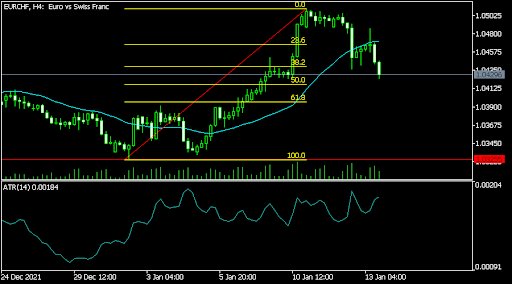