The improving US labor market, not additional stimulus payments, should provide consumers with the best reasons for optimism since last fall.

Consumer Confidence from the Conference Board is expected to rise to 96.9 in March from 91.3 in February and December’s low of 88.9.

Employment is the most important reference for US Consumer Confidence.

Consumer confidence reached its best pandemic level in October of 101.4 after six months of job restoration had returned employment to about 12.4 million of the 22.4 million laid off in the March and April lockdown debacle.

As the reimposed California lockdown in December shredded employment and payrolls lost 306,000 jobs, confidence dropped along with employment to 87.1, the weakest reading since August. 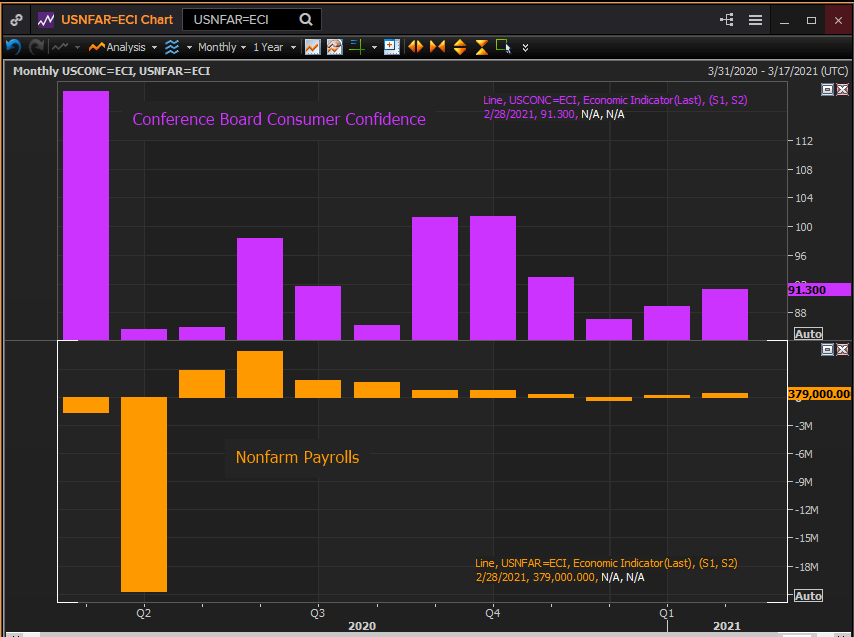 Payrolls are forecast to be 639,000 in March and to bring consumer sentiment back to its highest level since October at 96.9.

The January stimulus payment of $600 to most individuals and families drove a 7.6% jump in Retail Sales as all of the stipend was spent. But Americans did not mistake consumption, especially from free cash, for an improved labor economy and sales reversed 3% in February.

The latest $1400 gift, received by most people in March will likely spur a second consumption burst but it too will wither unless it is backed by job growth.

The Michigan Survey of Consumer Sentiment rose to 84.9 in March, its strongest score of the pandemic and well ahead of its initial 78.5 estimate and February’s 76.8 reading.

Consumers have two very good reasons to assert their optimism.  First, employment appears to have recovered from its December and January trough and from February has again begun to restore workers to their jobs. Nothing is more pertinent to consumer attitudes than the ability to find and keep employment.

Second, vaccination may have finally provided hope that the pandemic will be overcome in the next few months. Even the currently rising counts in several states and dire warnings from the Center for Disease Control, may not be enough to dent the sense of returning normality.

The US dollar has had a good first quarter as rising Treasury yields have anticipated a strong economic recovery. Consumer sentiment would be the latest sign that bond traders have not speculated in vain.