On 17 March, the US Federal Reserve (Fed) raised the ceiling on transactions under its Reverse Repo Program (RRP). Each eligible counterparty can now take, on each trading day, up to USD 80 billion in Treasuries held by the Fed on repo, from a limit of USD30 billion previously. 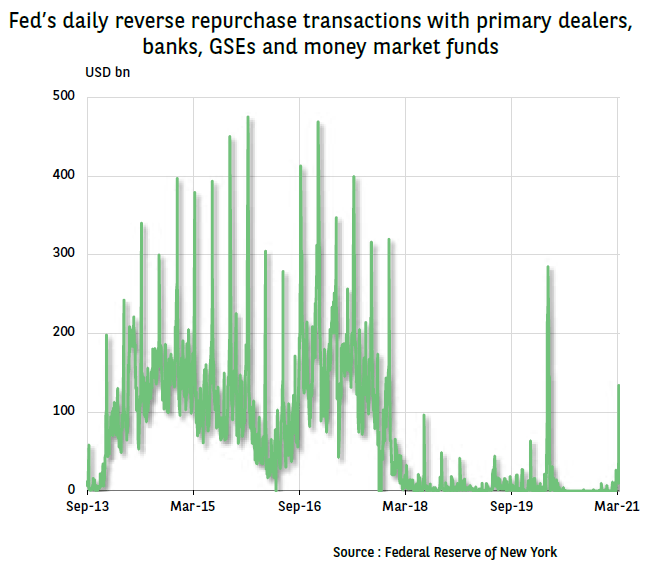 Introduced in the autumn of 2013, one year before the ending of QE3 (the Fed’s third quantitative easing programme) and two years before the beginning of the post-crisis monetary tightening, this facility saw high levels of participation by money market funds (with interest rates of between 0.01% and 0.07% up to the end of 2015) and helped establish a floor for short-term market interest rates. Against a background of abundant central bank liquidity, the programme has the effect of reducing downward pressure on short-term rates by encouraging money market funds and GSEs to “lend“ part of their cash to the Fed rather than on markets (repo, Fed Funds) where demand has dried up. Although the reactivated RRP has not so far seen much uptake (the interest rate paid is zero), it could allow, over the coming weeks, a slimming down of bank balance sheets. The penalty that certain banks are preparing to introduce on deposits from institutional clients, in a bid to reduce their balance sheets, could push this cash towards money market funds and from there, via the reactivation of the RRP, to the Fed.