On a yearly basis, the PCE inflation and the core PCE inflation, which excludes volatile food and energy prices, are forecast to rise to 6.6% and 4.7%, respectively.

After the US Bureau of Labor Statistics announced on September 13 that the Core Consumer Price Index (CPI) climbed to 6.3% on a yearly basis in August from 5.9% in July, the US Dollar Index (DXY) gained 1.5% on the day. In response to strengthening inflation, the US central bank raised its policy rate by 75 basis points to the range of 3-3.25% eight days later. Additionally, the Fed’s updated Summary of Economic Projections (SEP) showed that policymakers’ median view of the Fed's policy rate at the end of 2023 rose to 4.6% from 3.8% in June's dot plot. In turn, the DXY extended its rally and reached its highest level since May 2002 at 114.78 earlier in the week.

Since the DXY’s upsurge witnessed in the second half of September was fueled by the hot August CPI data, the market reaction to a stronger-than-expected PCE Price Index could remain short-lived. The Fed has already responded to rising price pressures in August and the September CPI data report is likely to have a more significant impact on the market pricing of the next Fed rate decision rather than August PCE prints. According to the CME Group’s FedWatch Tool, the probability of one more 75 bps rate increase in November currently stands at 58.5%. 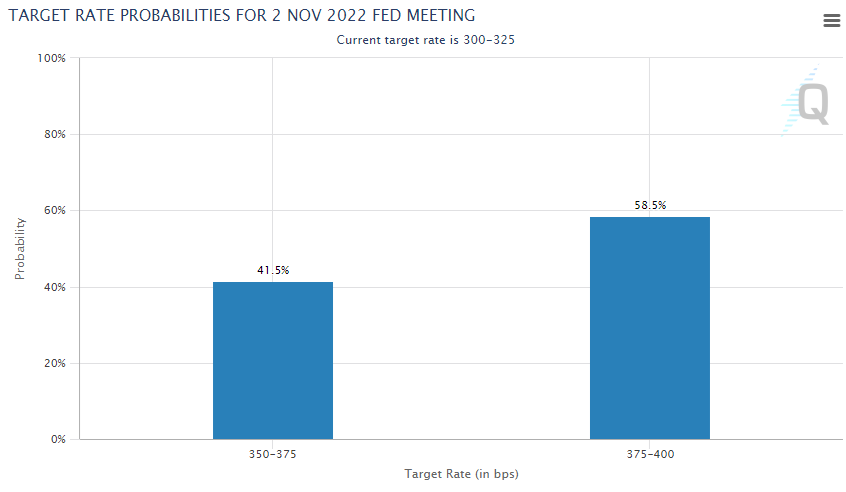 Market participants will pay close attention to the core figures. The 10% decline witnessed in crude oil prices in August is likely to limit the potential increase in the headline PCE inflation. More specifically, the monthly core PCE Price Index will be the key figure to watch because it will not be distorted by base effects. The market expectation is for the monthly core PCE inflation to rise by 0.5% in August following July’s 0.1% increase. A reading above 0.5% could help the dollar outperform its rivals but it is unlikely to trigger a significant bullish rally. Even if that were to be the case, profit-taking ahead of the weekend could cause the currency to erase any potential gains.

On the other hand, the dollar’s overbought conditions and the absence of a healthy correction suggest that a soft monthly core PCE inflation print between 0% and 0.3% could translate into a powerful reaction. Investors have been struggling to find an excuse to give up on dollar longs and reassess the situation before September inflation and employment data. Ideally, Wall Street’s main indexes would rise sharply in that scenario and result in a deep correction in the DXY.