Though his predecessor nicknamed him “Sleepy Joe”, President Biden has advanced at breakneck speed as he completed his first 100 days in the White House. After passing the USD 1.9 trillion American Rescue Plan in March, most or all of which will serve to stimulate demand, the President is now targeting the supply side with a proposal to inject USD 2.3 trillion into US productive facilities over the next 8 years, the equivalent of two presidential terms. The “American Jobs Plan”, which Congress is currently debating, offers a big dose of economic patriotism, as is often the case following major crises. This plan brings to mind the interventionist drive of the American Recovery and Reinvestment Act of 2009, which aimed to rescue the US automobile industry, among other objectives. Twelve years later, the Federal government is preparing to invest in strategic sectors, such as semiconductors, which in the administration’s eyes have become overly dependent on China. It also addresses the acute problem of America’s crumbling infrastructure. Yet the Biden plan faces a major hurdle that will make it hard to implement: infrastructure policies are generally the domain of State governors and depend less on Washington’s determination than on the tax consent of the local authorities and populations. Another key subject of debate, even within Democratic circles, is raising corporate taxes, one of the main instruments for funding Federal policy in the future.

And for an Additional USD 2.3 Trillion…

First put out the fire, then begin to rebuild: the “American Jobs Plan” aims to consolidate America’s growth potential as well as its economic sovereignty via three key pillars. By proposing to modernise “20,000 miles of highways, roads and main streets”, the first pillar addresses one of the great paradoxes of the United States: the world’s wealthiest nation suffers from a chronic shortage of infrastructure investment (see chart 1). 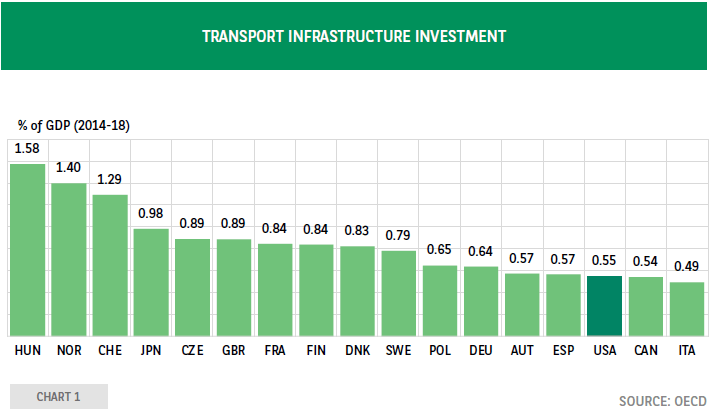 A substantial share of the budget (USD 620 bn) will be devoted to transport infrastructure, including accelerating the transition to electric vehicles via EV rebates and the installation of charging stations. Yet the Federal authorities will only be able to act indirectly, through partnerships with private companies or through incentives for the local authorities (state, municipal and county governments) to invest in public works policies for which they alone have the decision-making power. The same can be said about the plan’s second pillar, which covers the no less vital question of housing (build and rehabilitate 500,000 homes) and the utilities that serve them (water, gas, and electricity), which are also aging. With an investment of USD 690 bn, the Federal government intends to focus on the ecological transition, including the weatherisation of buildings and the promotion of “green” energy. It is about time, since the United States is lagging far behind in this area (World Economic Forum, 2019). With a budget of USD 580 bn, the third pillar on “jobs and innovation” aims to support industry and research, especially in areas where the United States is increasingly dependent on China, such as semiconductors, batteries, high-speed internet, and active drug ingredients. With a high dose of economic patriotism, this last pillar of the plan can be seen as the Democrats’ version of “Make America Great Again”, with the big difference that this time America’s “comeback” is financed not by debt but by higher taxes.

Presented alongside the “American Jobs Plan”, the “Made in America Tax Plan” seems to be an extremely ambitious corporate tax reform proposal since the White House wants it to be the cornerstone of global fiscal harmonisation, which has been rather vague so far. Unsurprisingly, it is contested by the Republicans, who see it as a threat to America’s competitiveness, but it is also opposed by some Democrats, who would prefer to see more income tax cuts for individuals.

Although there is no consensus on the subject, no one should be surprised by the proposal to raise corporate taxes, especially on American multinationals. Deploring the unfair distribution of the tax burden, President Biden has long made raising corporate taxes a big part of his agenda, along with raising taxes on the wealthiest individuals, as presented recently. Since the mid-2000s, the corporate tax rate has fallen constantly in the United States, and hit an all-time low of 1.3% of GDP in 2019 after the cuts introduced under the Tax Cuts and Jobs Act. Without returning to the tax rates that prevailed during the Obama presidency, the main corporate tax rate would be increased to 28% from 21%. This measure would increase Federal tax revenues by USD 1 trillion over 15 years. Generating roughly the same amount, the tax regime applied to earnings generated abroad would be tightened significantly: elimination of the tax rebate for physical investment abroad, elimination of the foreign-derived intangible income deduction, strengthening of anti-inversion provisions for mergers and acquisitions to prevent US corporations for inverting, and raising of the minimum tax rate to 21% from 10.5%, which the United States would like to see become the minimum tax rate worldwide.

Using the very simplified example of an American company whose business is equally divided between the United States and Ireland, the “Made in America Tax Plan” would increase the average corporate tax rate to 24.5% from 17% and would reduce after-tax income by roughly 9%. The hardest-hit sectors would be those with global, intangible lowtaxed income, such as licenses, patents and personal databases. Of the S&P 500 corporations, the “Made in America Tax Plan” would have its biggest impact on companies in information and communications technology and healthcare (Financial Times, 20215).

Now all the administration has to do is get the plan passed into law. To succeed, the corporate tax reform bill must win the approval of all of the Democratic senators, who have a razor-thin majority in the Senate. Yet some Democrats have already said they will object to any plan that does not reinstate the deduction of state and local taxes from Federal taxes. Limited to USD 10,000 by Donald Trump, this measure primarily hurts households from wealthy urban areas, the majority of whom vote Democratic. Yet abolishing this limitation would have both a political and economic impact. It would deprive the Federal government of a major share of tax revenues (USD 77bn in 2019), which would prevent the administration from completely funding its infrastructure plan. President Biden already seems to be assuming that some compromises will have to be made.

GBP/USD picks up bids around 1.3895, up 0.05% on a day, during Wednesday’s Asian session. The cable keeps recent recovery moves to challenge the immediate upside hurdle, namely 50-SMA and short-term triangle resistance.

Dogecoin price remains indecisive after setting up record highs on May 4 at $0.611. The MRI has flashed a reversal signal, indicating that DOGE is might retrace. A spike in bullish momentum due to FOMO among buyers could result in a new all-time high at $0.561.

S&P 500 correction arriving or not?

One more day of upside rejection in S&P 500, in what is now quite a long stretch of prices going mostly sideways. As unsteady as VIX seems at the moment, it doesn‘t flash danger of spiking in this data-light week, and neither does the put/call ratio.