Over the past 15 days, the Turkish lira has depreciated 21% against the euro, including a single-day decline of more than 10% on 23 November. At the same time, 10-year government bond yields have risen above the 20% threshold. This bout of weakness was triggered by 1) another cut in the central bank’s key rate on 19 November, from 16% to 15%, despite surging inflation, which reached 19.9% year-on-year in October, and 2) President Erdogan’s statements justifying the easing of monetary policy as part of a new economic policy, after the President demanded that the National Security Council declare an “economic war of independence”. The President also lashed out at the opportunistic speculative behavior that took advantage of the lira’s depreciation to raise prices.

The main axis of the new economic policy is to improve the competitiveness of exports, which should be facilitated by currency depreciation. The central bank is giving priority to reducing the current account deficit, which is the main cause of the lira’s weakness, and not to fighting inflation. The paradox is that the current account deficit has been cut by half, from USD 35 bn in 2020 to a cumulative 12-month total of USD 18.4 bn in September 2021, thanks precisely to strong export performances. The capital account balance (including errors and omissions) also showed a very big surplus, entailing official foreign reserves to recover, to a total of USD 88 bn (excluding gold) on 21 November, up from USD 50 bn at the beginning of the year. Clearly, markets have another view of what should be the objective of monetary policy. And despite exchange rate pressures, they are not anticipating a sudden about-face, as was the case in September 2020. 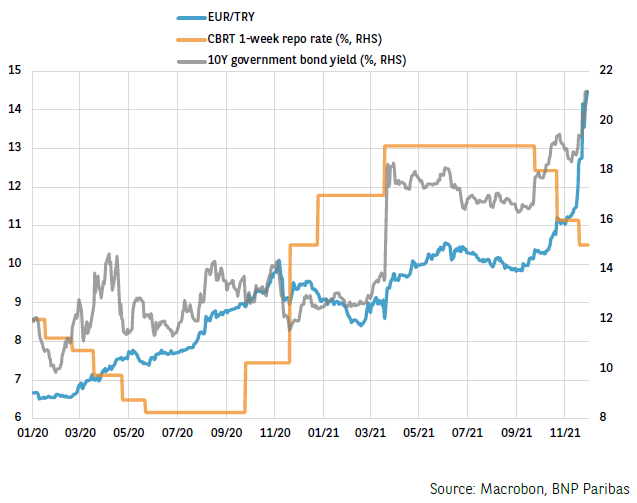