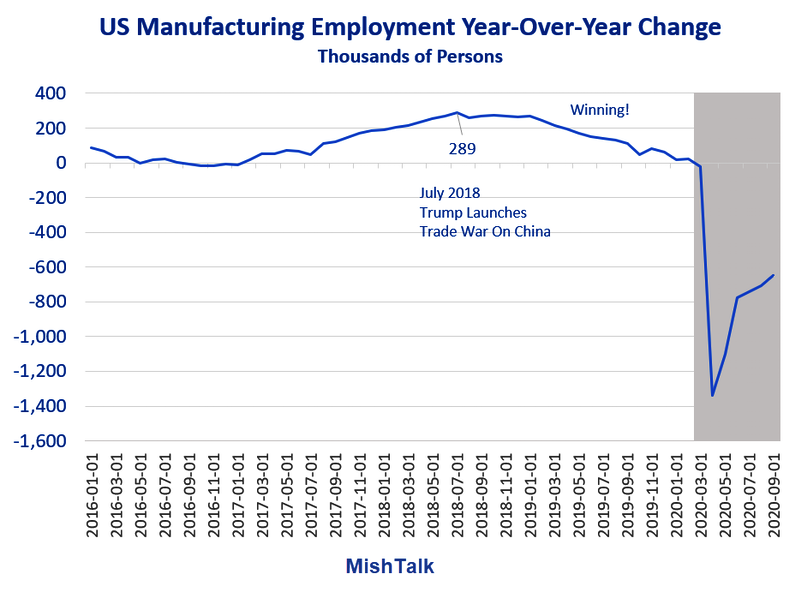 Trump is clueless about trade. His tariffs are a disaster. It's time for a change.

Several of my readers have asked me "What is Jorgensen's trade policy? Is she really Libertarian?"

Let's take a look at Jorgensen on Trade and Immigration.

Those are Jorgensen's precise words. I put numbers to what I believe are the 5 key ideas, adding emphasis to points 1, 3, 4, and 5.

Trump Promised to Bring Back Manufacturing Jobs: How is He Doing?

Trump's trade war with China had the expected results. This happened well before Covid hit.

Trade Wars are Good and Easy to Win

In March of 2018 Trump boldly announced in a series of ridiculous Tweets "Trade Wars are Good and Easy to Win". 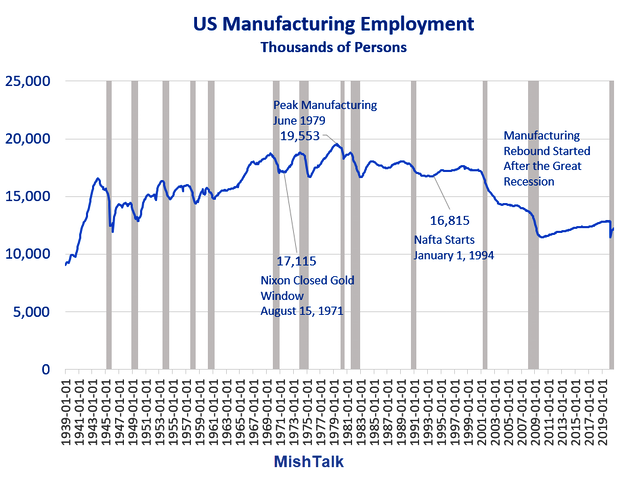 Increased productivity means more goods at lower prices to the benefit of all.

The Fed has foolishly waged a battle on productivity and lower prices creating stock market bubbles and excess inequality on top of it.

Trump wants to reduce the trade deficit but the cause of consistent deficits dates to Nixon closing the gold window on August 15, 1971.

Balance of Trade vs Gold Window 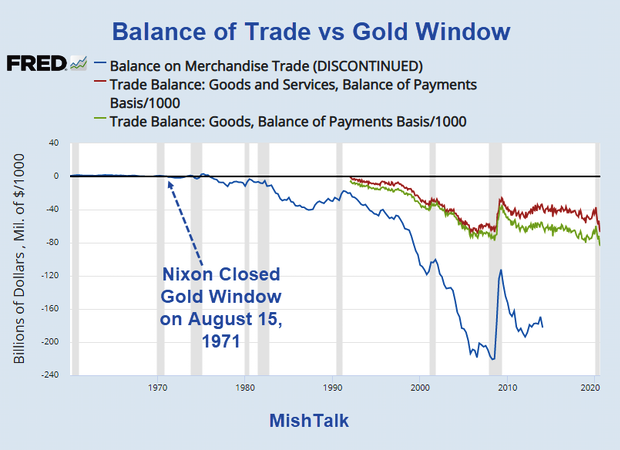 The Census Department changed the way they reported the balance of trade in 1992, dropping the old method entirely in 2014.

However, a chart of both methods clearly shows what happened.

There is considerable debate among economists as to whether the current trade deficit is even meaningful, but Trump is not going to solve anything via his policy of tariffs.

That candidate is Jo Jorgensen.

Like Jorgensen, I am strongly anti-war and strongly free trade.

EUR/USD has extended its gains, nearing 1.1950. The US dollar is on the back foot as the FOMC Minutes hint to more QE coming and as US jobless claims rose again. Coronavirus headlines and the ECB meeting minutes are eyed.

GBP/USD is nearing 1.34 amid dollar weakness, shrugging off concerns of a snag in Brexit talks. It is unclear if Chief EU Negotiator Barnier travels to London for further talks.