Treasury Yields Continue to Fall … Bringing Stocks Down with Them?

The stock market hit a predictable snag when it hit the top of the mini-megaphone pattern I have been projecting at 27,400. One of the clear reasons: The China trade deal keeps looking less likely – as Rodney and I have been forecasting from the beginning.

But the larger reason has been that the bond market keeps seeing a slowing global economy. Hence, yields on the 10-year Treasury just keep falling with only a minor bounce in recent days that does not look likely to last. Here’s the bigger picture since the 2007 economic peak. Yields have actually been falling in a more predictable channel since 1989. But they have been consolidating and moving more sideways in a channel since 2012. It now looks like the top was likely put in last October, at 3.25%. The last low in 2016 was 1,36% and yields are likely to continue to fall in the next few months towards a slight new low around 1.32%. 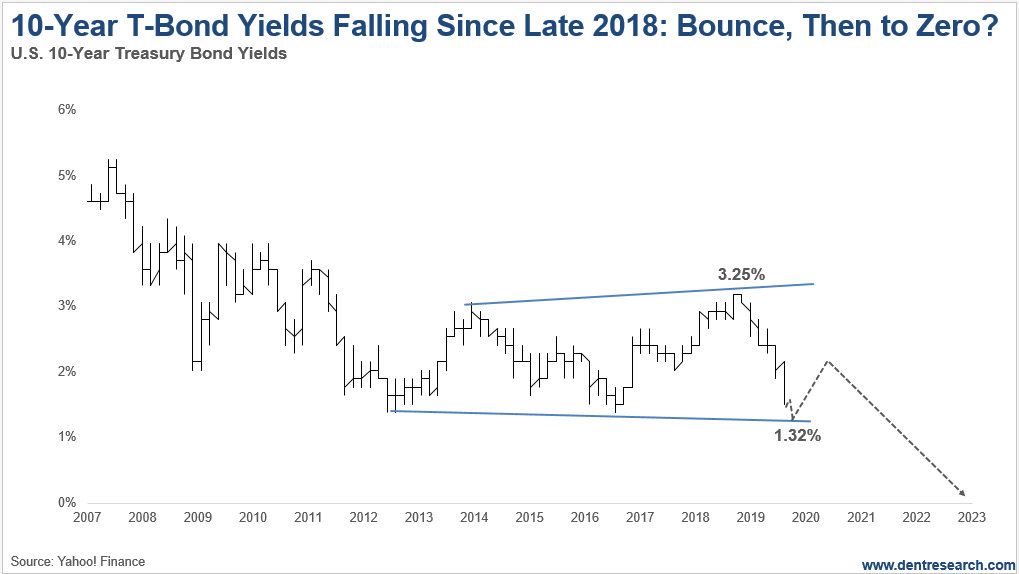 Normally bond yields would be rising with inflation in the late stages of an economic boom. But not this “perverted” one this far. But we could still see a significant rise in longer term rates in the final bubble stages still predicted ahead. That will give a final buy signal for longer term bonds. If bond yields continue to fall, then stocks are likely to continue to correct in the deeper correction scenario off the mini-megaphone top first. Then we could see the final Dark Window rally into a top that would come later in 2020 rather than early. A likely scenario is that the Fed continues to be more muted in lowering rates, then starts to panic and gets more into Trump’s call for more aggressive rate cuts with continued falling rates. Maybe we finally see that 50bps cut in October or November. Then stocks would rally, and bond yields could bottom for a while, likely with signs of a bump in growth rates from stimulus programs in China, Europe and Japan, with similar expectations for the U.S. after stronger easing.

The Longer-Term Trends Are Still Clear

But the longer-term trends are still clear: 10-year Treasuries should go to historically low yields towards zero by late 2022 or so, near the bottom of the next greater financial crisis and depression. That will fulfill a grand 40-year up and 40-year down cycle since the last depression low yields in 1941! Then the gold bugs get their inflation trends again, but global growth will be moderate as will inflation rates – so still NO hyperinflation. When such bond yields finally hit bottom in 2022 or so: sell bonds, and buys stocks, gold and commodities!