With inflation concerns front and centre of investors' minds as 2022 gets underway, it is perhaps not surprising that Gold has been the top traded market amongst clients. Traditionally viewed as a hedge against the rising cost of living, any goldbugs will be hoping that this year proves to be a bit more exciting for the precious metal than 2021 ended up being. With plenty of other assets steadily climbing, gold had a disappointing 12 months and ended the year lower than where it started. It’s always a popular market - but the cynic could suggest that if gold is such a great hedge against inflation, then why hasn’t it started moving already? Either way, it will be an interesting one to watch as the year gets underway. 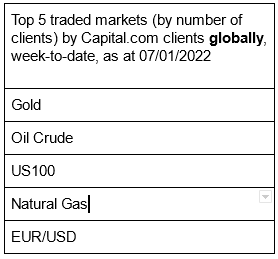 The high tech NASDAQ100 index is always a popular one and Wednesday of this week was something of a momentous day - just not in a good way. The index suffered its biggest fall since February 2021, ensuring that the new year got off to quite a dramatic start. The NASDAQ has been lagging behind its more border-based bigger brother, the S&P500, in recent weeks. Are investors starting to worry that the go-getting tech stocks have had their time for now and valuations are getting too overstretched? It is often said that bull markets climb a wall of worry and I think the fate of the NASDAQ will be an interesting watch this year as we see the tug of war between the devoted “buy the dip” investors, and those who have become more cynical of the lofty valuations tech stocks have hit.

CFDs are complex instruments and come with a high risk of losing money rapidly due to leverage. 73.81% of retail investor accounts lose money when trading CFDs with this provider. You should consider whether you understand how CFDs work and whether you can afford to take the high risk of losing your money. Risk Disclosure Statement The value of shares and ETFs bought through a share dealing account can fall as well as rise, which could mean getting back less than you originally put in. Past performance is no guarantee of future results. Risk warning: transactions with non-deliverable over-the-counter instruments are a risky activity and can bring not only profit but also losses. The size of the potential loss is limited to the funds held by us for and on your behalf, in relation to your trading account. Past profits do not guarantee future profits. Use the training services of our company to understand the risks before you start operations.