The following went out last month to clients of my friend Doug Behnfield, a wealth management advisor and senior vice president at Morgan Stanley in Boulder CO. Like your editor, he is skeptical that consumer inflation can persist for long with the U.S. economy in recession and a bear market in progress. Deflation is coming, he says, along with a further decline in stocks of at least 20% from early July's lows. Doug has been recommending long-dated Treasurys both as a defensive investment and for potential long-term capital gains from falling interest rates. 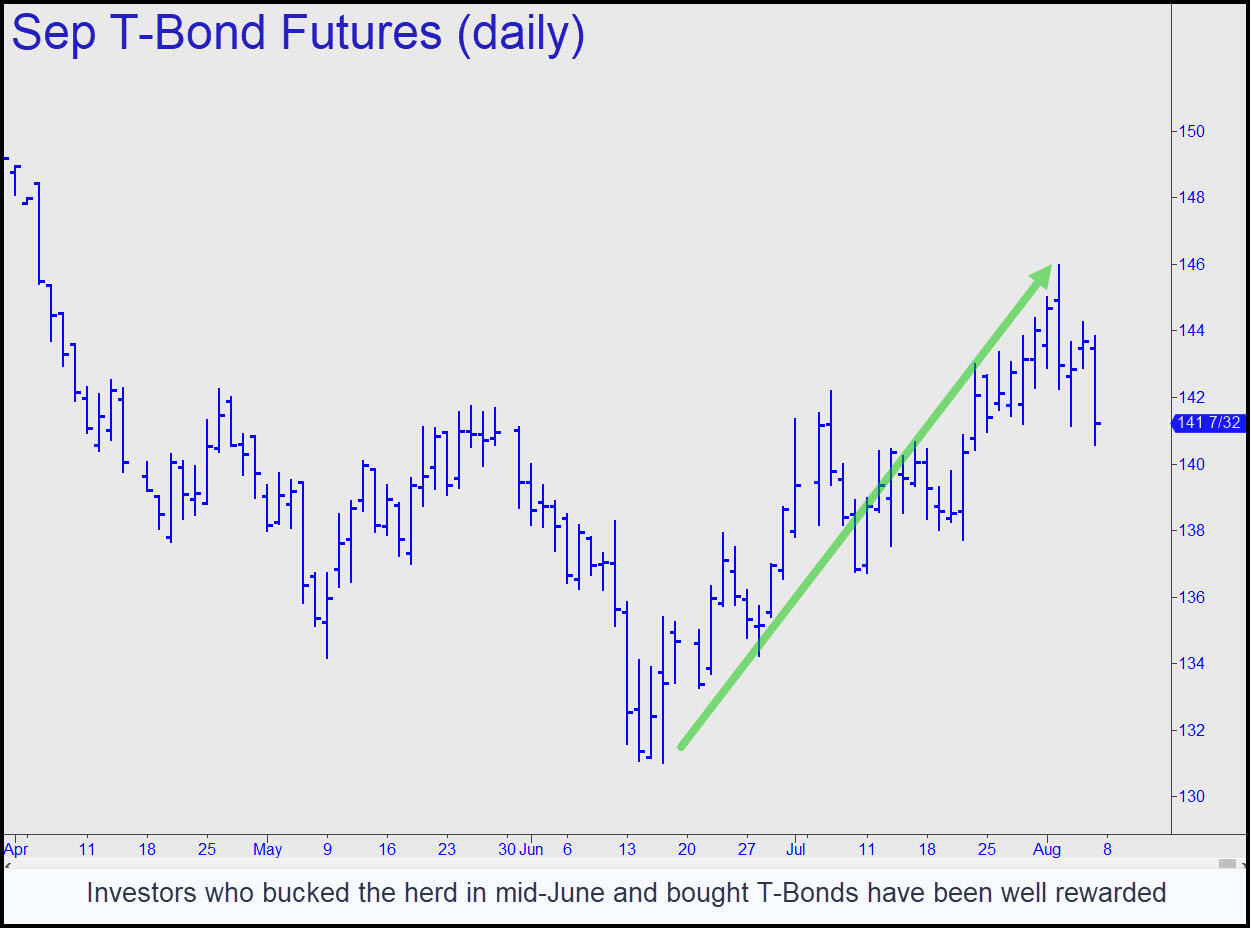 On January 11, 1987, the Denver Broncos played their last playoff game of the season at the Cleveland Browns. It was rainy and muddy. With 5 minutes left to play, the Broncos had the ball on the two-yard line after a muffed kickoff return and the score was 13-20, Cleveland. Legend has it that as the huddle was called on the two, ProBowler and offensive lineman Keith Bishop said to the team; “We got ‘em right where we want ‘em!” Through a series of runs and passes, sacks and scrambles, John Elway led his team 98 yards to score a touch-down to tie the game. The Denver Broncos won in overtime and went on to the championship game.

The first half of 2022 is characterized by a bear market in stocks with the S&P 500 down 20.58% and the NASDAQ down 29.51%. While shorter maturity bonds were down much less, the longest duration Treasury and municipal bonds were just as bad as stocks. The Index of long Treasury Strips was down 27.90%1 and the CEF Connect Index of National Leveraged closed-end Municipal Bond Funds was down 20.1%2 . Here, at the end of the first half of 2022, we are staring at the worst start to a year for stocks and bonds in decades. We got ‘em right where we want ’em.

The combination of a loss of upward price momentum and very disappointing economic data are the primary causes of the stock market decline. Unexpected CPI inflation and a powerful pivot toward rate hikes by the Fed are the primary cause of the rising bond rates and resulting price drops, but the prospect of Fed hikes and rising interest rates across the yield curve hurt stocks too. Under normal circumstances, recessionary economic conditions and a bear market do not coincide with growing inflation for very long. The oil price shock in 2008 ended halfway through the Great Recession and in the process, CPI inflation reversed from 5.6% in July of 2008 to -2.1% (deflation) in July of 2009 . In this case, the increase in inflation has not only been long, but steep and broad as well. Because the current price increases have occurred globally and are almost entirely attributable to supply shocks, they could fade quickly. The Fed’s hawkishness has already had a severe negative impact on demand for housing, autos and discretionary consumer goods in general. David Rosenberg characterized the current environment and likelihood of a recession this year as follows:

“This is as close to a slam dunk call as there is — and the fact that the Fed is pushing back hard, in fact, with a 4%+ real GDP growth view for the second half of the year, is actually pretty scary. Then again, going back to every recession since 1970, not once did the Fed economics staff see a recession — even when the downturn began the very next month. The spending intentions numbers were simply horrible in the UMich report. Auto-buying plans dropped to an all-time low, and for homes, plans are the weakest they have been since July 1982. The overall “buying conditions” index sank to its lowest level ever — the "good time to buy" a big-ticket durable is down to the November 1952 reading.”

From inflation to recession

There is plenty of evidence that the narrative on Wall Street is changing from Inflation to Recession. Along with it, supply bottlenecks are easing and the price of commodities such as metals, grains, lumber, oil and natural gas appear to be rolling over. Higher mortgage rates and record high home prices have ground the housing market to a halt, just as over a million rental units are scheduled for completion in the next months. If weakness in the economy (that appears to be leading to recession) should continue, the result may be similar to 2008-2009, i.e., deflation and lower interest rates. In the meantime, because of very disappointing consumer spending data, the Atlanta Fed, who had just reduced their estimate of the just-completed second quarter from 0.3% to -1.0% on June 30, has sliced it to -2.1% on July 15 . This is a very steep, negative trajectory for the economy.

Mike Wilson, Morgan Stanley’s Chief Investment Officer, is anticipating that we will be in recession as the year draws to a close and if so, the stock market is vulnerable to at least an additional 20% stock market decline from current levels. He also states that, under these circumstances, long-duration Treasury bonds should be added to portfolios, even as equity exposure should become much more defensive. He has been remarkably prescient, particularly since the markets started becoming much more difficult last fall.

As in most cases, Bob Farrell’s observation that “It’s the market that makes the news, not the news that makes the market”, applies to our current environment. We have seen continuing deterioration in stock prices and the counter-trend rallies are becoming less significant. On the other hand, it appears that a meaningful trend change has occurred in bond yields and prices. Note that the solid line in the following charts is the 50-day moving average. It is widely followed in technical analysis as an intermediate trend indicator. The 50-day moving average for bond yields had been up since Christmas but has recently reversed down in somewhat dramatic fashion. The S&P 500 is firmly entrenched in its downtrend that began at the beginning of the year.

Needless to say, unlike football, investing is not a game. The first half of 2022 has been brutal for the performance of both stocks and long-term bonds. It really does appear that the tide has turned and the risk of recession is beginning to dominate the narrative in the investment community, even as the weight of the evidence is less supportive of continuing high inflation readings. Commensurate with the weak economic data that has been seeping in and the bond market rally since mid-June, expectations for further Fed rate hikes have been pared back substantially. Even as Fed hike expectations have been coming down, expectations for cuts have moved up on the calendar.

In a letter, the House Financial Services Committee (FSC) asked the Department of Justice (DoJ) for their CBDC assessment. The House Committee analyzed whether the Federal Reserve has the authority to issue a CBDC without authorizing legislation.