Outlook: We get the house price index (for November), the Conference Board consumer confidence index and the Richmond Fed manufacturing index. None of these are notable for moving markets, especially when the star of the show is equities.

This is another week during which it will pay to remember that prices never move in a straight line. The sell-off in some currencies is nuts, like the CAD, which “should” benefit from a sane central bank and oil. To be fair, estimates of the BoC taking action tomorrow are being dialed back and oil turned around for a lower close, but neither explains the extent of the CAD price move.

We saw some heavy reversals in the US afternoon yesterday, which is profit-taking or second thoughts when the US stock indices moved up–twice, and on no news at all. Financial press reporters always find a “reason” for changes, even when they are ridiculous and often downright stupid. For example, oil is lower this morning on “uncertainty over Russia.” Gimme a break.

Press reports are sticking with “blame the Fed and those pending rate hikes” when it’s a far deeper and wider change in sentiment. Maybe the Fed shocked the equity gang when it announced inflation can’t be considered transitory and started mentioning multiple hikes, but they were all too ready for it. And the stock market correction has not yet gone far enough to weed out the poorer players, like companies with no earnings, and to reduce those ridiculously high P/E’s whether real, forward or trailing. As long as the market is doing a stringent spring cleaning, it wants to deal with the other junk in the back of the closet under the stairs–like crypto and SPACs. We hesitate to name it a quest for quality, but it does have that smell.

We don’t approve of words like “meltdown,” “crash” or “burst bubble.” It’s a re-boot, and while it is caused by the Fed and its intention to bust inflation, the exact details of the balance sheet contraction and other behind-the-scenes actions are not really relevant. Now that we have had the Big Start, volatility may become a bit tamer, but it ain’t over yet. We’d bet a dollar that the Fed doesn’t change its tune by one note, despite the queasiness it must feel at the pension and private investment accounts of millions getting devalued. It’s not that they don’t care (like Greenspan)–it’s that they can’t be seen to cater to Wall Street fat cats. If you want an everything-considered review, the always excellent Authors has a big piece in Bloomberg.

Bloomberg reports no economist expects a policy change today but everyone will be glued to the TV press conference for any hint about the pace of rate hikes and also any hint that it might be more than three. Funny, nobody seems to think it might be fewer instead of more.

The stock market may be the driving force for risk sentiment, but we have plenty of other things on the table. Russia, for one. It’s hard to avoid the feeling that the West is being tricked into doing stuff Russia will use as an excuse to do what it was going to do in the first place–it “must” invade Ukraine against the “threat” from Nato. Then there’s Boris, now under investigation by the police. The police? For violating Covid lockdown rules? This means something. UK governments have fallen for less.

We haven’t seen a recent survey on foreigners’ attitude toward the US and Americans, but we can guess the outcome–a bunch of vulgar, crass louts who reject science alongside civility and lack the brains to value the constitution, let alone oaths to it. Does this really matter to financial markets? Yes, albeit in ways we can’t always pin down. It’s a bit like the dollar going up on safe-haven flows because the former president was raising risks–more than ironic. A general distaste for things American is contributing to the lack of momentum in bidding the dollar–and probably also finishing correcting the S&P.

Stock Market Tidbit: Bloomberg repeats the story that Fed hikes are not accompanied by stock market sell-offs–the opposite, in fact. “History indicates that 2022 is likely to end on a better foot than it started. U.S. stocks have historically performed well during periods when the Fed raised rates, as a growing economy tends to support corporate profit growth and the stock market. In fact, stocks have risen at an average annualized rate of 9% during the 12 Fed rate hike cycles since the 1950s and delivered positive returns in 11 of those instances, according to Keith Lerner, Trust's co-chief investment officer. The one exception was during the 1972-1974 period, which coincided with the 1973-1975 recession.”

“On average, strategists project that the S&P 500 will finish 2022 at 4,982, 13% above Friday’s closing level, according to data compiled by Bloomberg. The index surged nearly 27% in 2021 -- its third straight year of double-digit returns.”

Granted, the mid-term election years are dangerous. “Since 1950, the S&P 500 has averaged an intra-year pullback of 17.1% in midterm years, according to LPL Financial. But the final three months of a midterm year and the first two quarters of the following year, known as the pre-election year, have been some of the strongest quarters for stocks over the four-year U.S. presidential cycle. In pre-election years going back to 1950, the benchmark index has notched an average return of 32.3%.” 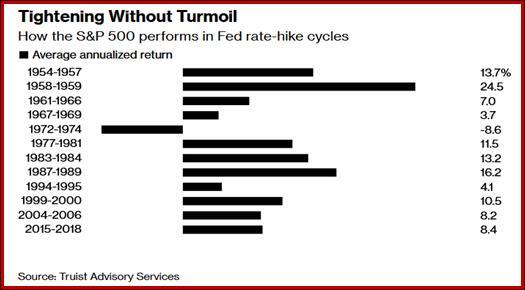 A second story along the same lines points out that the supposed inverse correlation between interest rates and stock index levels just ain’t so. We wrote about the absence of comparison between interest rates and dividend yields in our CNBC book two decades ago. If nobody is looking at a factor, it’s not a factor. The Bloomberg articles names trading decisions on any of large number of factors, “many of which have little or nothing to do with interest rates or even companies’ future prospects, such as technical analysis, values-based considerations or just speculation. So the idea that stock prices merely or even mostly reflect the present value of companies’ future cash flows isn’t well grounded in reality.”

And the correlation is weak, -0.21 “over the past 140 years, meaning very weak negative correlation if any. There have been many times when interest rates and stock valuations have been simultaneously above or below average, bucking the idea that interest rates necessarily push stocks in the opposite direction.”

And “If rates and stocks do indeed move in opposite directions, it should work both ways, and it rarely has. By my count, the Fed has embarked on 13 rate-raising campaigns since 1954. Rather than sinking the market, the S&P 500 Index moved higher during 11 of them, with a median gain of 14%, excluding dividends. The two exceptions were a brief rate hike campaign in 1971 in which the market declined 2%, and a longer one soon thereafter from 1972 to 1974 in which the market declined 26%. The latter episode coincided with an oil embargo that tipped the economy into a long recession, so it’s hard to know how much to blame rising interest rates for the selloff. “

“It makes sense that stocks have mostly moved higher during Fed rate increases. The Fed generally raises rates when the economy is doing well, which is also good for stocks. In fact, 11 of the Fed’s 13 rate hike campaigns coincided with a booming economy. The two outliers were during the 1970s and early 1980s when the Fed was forced to fight runaway inflation with higher rates despite a weak economy. In one of those cases, the stock market moved higher anyway, although not enough to offset higher inflation.“

“So don’t assume the Fed’s plan to raise rates is bad for the stock market. There’s a better chance the market will shrug it off.” Well, no–not shrug. The chatter has been going on for too long for that to be the right description, implying a minor blip. It’s not going to be minor. But we agree that it’s a correction with less behind it than is real. 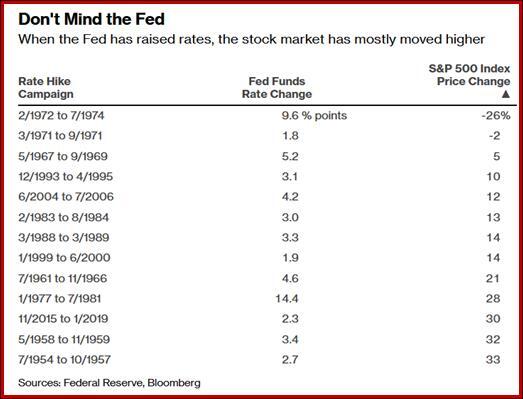