The battle to break above the early June highs is on, and the bulls are likely to win it more lastingly this time around, thanks to tech earnings. The runup to their aftermarket announcement has been promising, and more gains were added once the numbers came in. Can I turn from merely cautiously optimistic to broadly optimistic now? 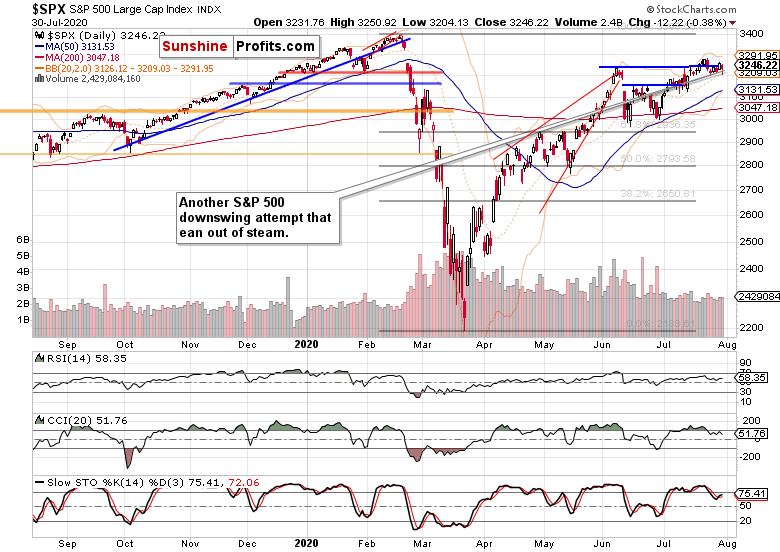 Yesterday's intraday downswing was soundly rejected, and prices closed again near to the early June highs. The chop around the horizontal blue line just got a more bullish flavor. The anticipation of positive tech earnings turned into reality, and has the potential to carry the S&P 500 rally further.

Yes, that's true just as my yesterday's comment on the frightening advance Q2 GDP and poor unemployment data, when I wrote that these concerns:

(…) are likely to be brushed aside during the regular session's trading – I see the focus as being rather on the upcoming stimulus details and tech earnings.

So far so good – let's check the credit market performance next.

The Credit Markets’ Point of View 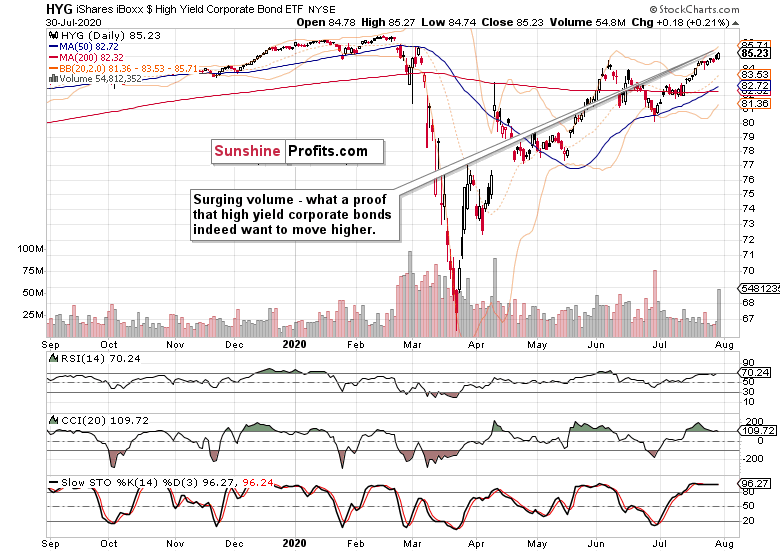 A very high volume day in high yield corporate bonds (HYG ETF) yesterday, with prices closing near their daily highs. That's a show of strength, and a supporting rationale to drive stock prices higher next.

Investment grade corporate bonds (LQD ETF) though didn't take part in yesterday's HYG hooray (please see this and many more charts at my home site). At the same time though, they're not flashing signs that would make me doubt the HYG move higher. 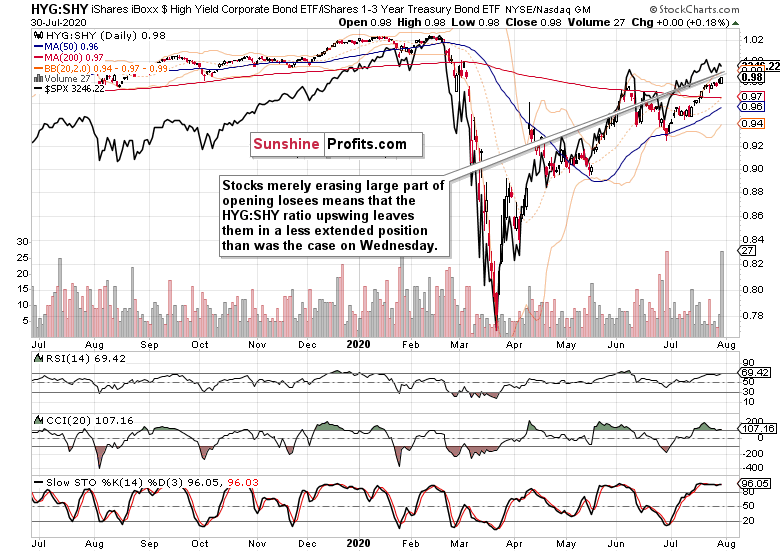 The overlaid S&P 500 closing prices (black line) compared with the HYG:SHY ratio show how relatively timid yesterday's race to erase opening losses in stocks was. After the late-July soft patch in the 500-strong index, stocks are getting an increasingly stronger HYG:SHY tailwind these days. Is the resolution to the early July chop being repeated with a fledgling upswing? I think so. 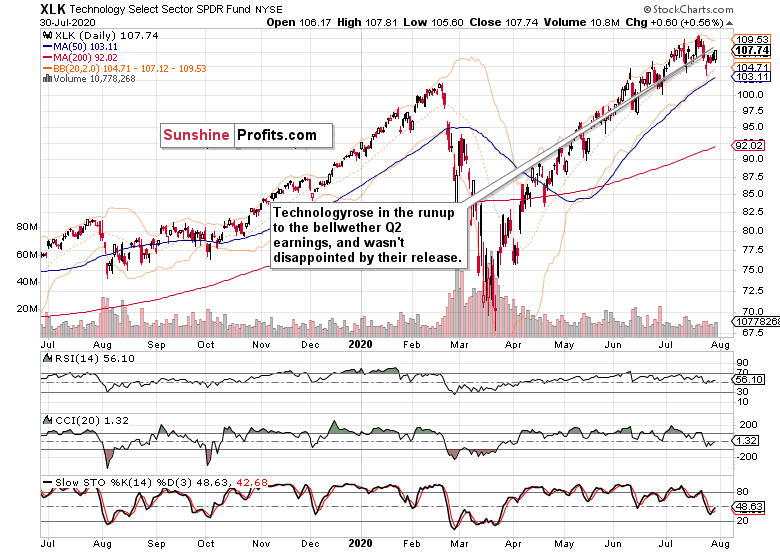 The renewed upleg in technology (XLK ETF) bodes well for the S&P 500, and even more so given that estimates were broadly beaten.

Healthcare (XLV ETF) recovered from the initial selling pressure, but its consolidation may have a little further to go regardless of the volume contraction that points to a bigger upcoming move. The drying selling points to an upside resolution more than anything else.

Financials (XLF ETF) also recovered from their intraday downswing, closing about unchanged. The volume though points at accumulation, which is likely to be followed by a move higher.

Consumer discretionaries (XLY ETF) keep trading in a tight range, and their intraday reversal on higher volume is similarly likely to result in another attempt to break above yesterday's close.

Industrials (XLI ETF) didn't dazzle yesterday, but the consolidation around their 200-day moving average is still likely to resolve with another upside move.

The first of the defensive sectors, utilities (XLU ETF) are still basing around their 200-day moving average, also with a bullish bias. The rotation into this value play is very much on.

The second one of the defensives, consumer staples (XLP ETF) keep the fire they've been on since late June, alive and well. While a consolidation of recent strong gains wouldn't be unexpected, the underlying bullish trend implications are undeniable.

On one hand, there's the theme of inflation in the pipeline, and steeply plunging greenback. But the reality of yesterday's advance Q2 GDP took some cream off the ETF's prices. As the dip was heavily bought, upcoming move higher appears inevitable.

Summing up, yesterday's S&P 500 rebound off the early session's lows got plenty of follow through next, and is likely to carry over into today's session too. Tech earnings surprised on the upside, and so did the semiconductors (hello AMD). The rotation into formerly lagging sectors is helped by the tech regaining breath. Smallcaps performed in line with the S&P 500 yesterday, and emerging markets again took the baton. While the S&P 500 daily market breadth looks concerning (the advance-decline line moved to bearish territory) and so does the $VIX upper knot to a degree, the S&P 500 upswing is more than likely to run on, proving both factors as of fleeting and inconsequential nature.