S&P 500 bulls were clearly rejected, and it‘s highly questionable whether they would make another run. I doubt they would. And even if, it‘s bound to get rejected as none of the bearish fundamental reasoning ceased to apply, and it‘s getting reflected in the chart technicals as well. As stated yesterday:

(…) The renewed tightening bets spurred by strong headline NFPs figure, will take their toll on risk-on assets that had been driving Friday‘s run. Bets on another 75bp hike in Sep have increased dramatically, practically proving Daly or Kashkari right in that the Fed isn‘t done yet or even close to the Fed funds rate to really get inflation down. While they claim that 2% is doable and soft landing within reach, the progression from 9% downwards just doesn‘t go fast like that. At best (repeating myself for months here), they would get to 5- 6% CPI, which means a tough Sep and one more FOMC still this year. Combined with balnce sheet shrinking projections, that would take a great toll on the real economy – one that is being softened by the still very expansive fiscal policy.

Given tomorrow‘s CPI that‘s likely to come in better than the markets fear it would (i.e. in support of the inflation has peaked thesis), the room for disappointment in inflation trades is there, and the hopes that the Fed might not get as aggressive on a better CPI figure, wouldn‘t balance that out in my view. Here comes a fitting question just in that allows me to develop these thoughts further to the benefit of the whole audience:

Q: CPI wednesday will certainly show much lower numbers than previously (mainly because oil was recently much cheaper than in May, June). FED has proven to be rather readily dovish in such events.

Investors will see the US companies and the US technology sector as the safe haven. Because elsewhere in the world (mainly in politically and economically weak Europe) is a mess. US as safe-heaven was proven by recent Apple and Amazon earnings and also by recently approved US government stimulus for micro-chip / semiconductor production.

Isn't this environment rather bullish for US equities especially to the near future ?? Outflow of money from Europe into strong and safe US.

A: I doubt the Fed would react dovishly to softening inflation as they have to take on the pesky inflation expectations (it was a key lesson of the 1970s when they didn‘t). It gives them optically a better chance at taking inflation down fast – and the markets would wake up to their dovish perception mistake, should they make it in the first place.

The fiscal stimulus is though being faded in the stock market, it‘s closer to the case of sell the news than anything else. The money flows are going to be selective about what assets they would lift, and odds are it wouldn‘t be parked in tech for too long if Treasuries stop revolting against the Fed‘s rate raising. Such a time point would come over the nearest months ahead, but still I am not counting on any giant Nasdaq run, or rather any run to speak of (no matter the degree of Treasuries‘ next move). 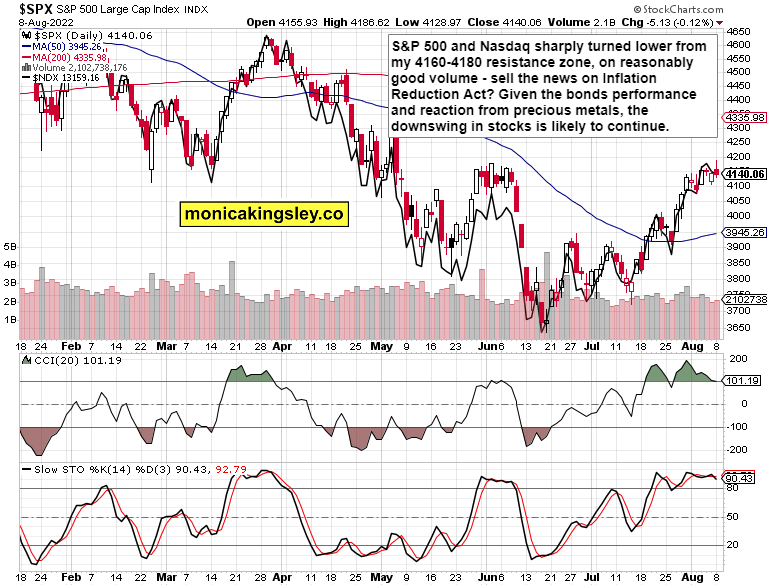 S&P 500 is turning down, and Friday‘s signal is getting repeated – i.e. getting stronger. The daily indicators have also deteriorated, but the volume and sectoral internals message is the most important here.

HYG indeed attracted sell – and the reversal to the downside needs a confirmation today in terms of rising volume and daily close anywhere in the Friday‘s daily range.

Precious metals want to turn up, and miners are at least on a daily basis following. Echoing yesterday‘s premium thoughts, they aren‘t selling too hard on the turn towards anticipating tougher tightening ahead. With hikes to be paused after Sep for a while, the metals would have an easier time before that FOMC day in Sep. Next week‘s CPI will have a short-term effect only – the consequences of recognizing inflation as sticky no matter what the Fed has done already, would be greater. This moment awaits still. 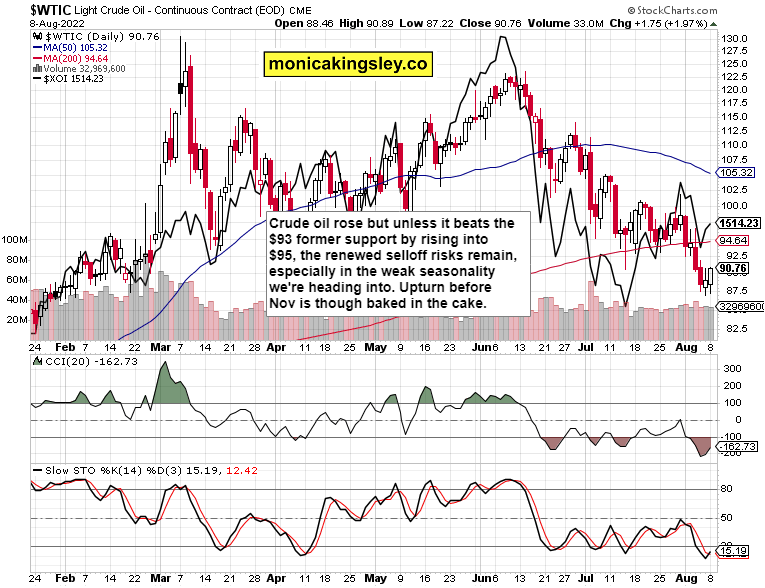 Crude oil‘s rebound isn‘t yet turning the tide, and the approaching seasonality spells trouble ahead. I‘m still leaning towards the $88 support slowly giving way as $85 approach comes next – we may land in the low 80s really before rebounding early November. 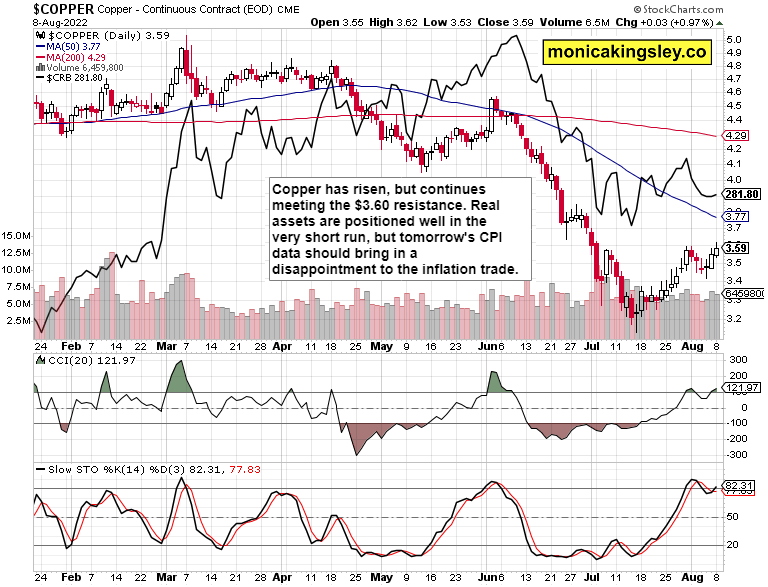 Copper‘s short-term bullish move is encouraging, but the vulnerability to the hawkish Fed moves and rhetoric remains – it would probably play out after the CPI only, which applies also to oil. 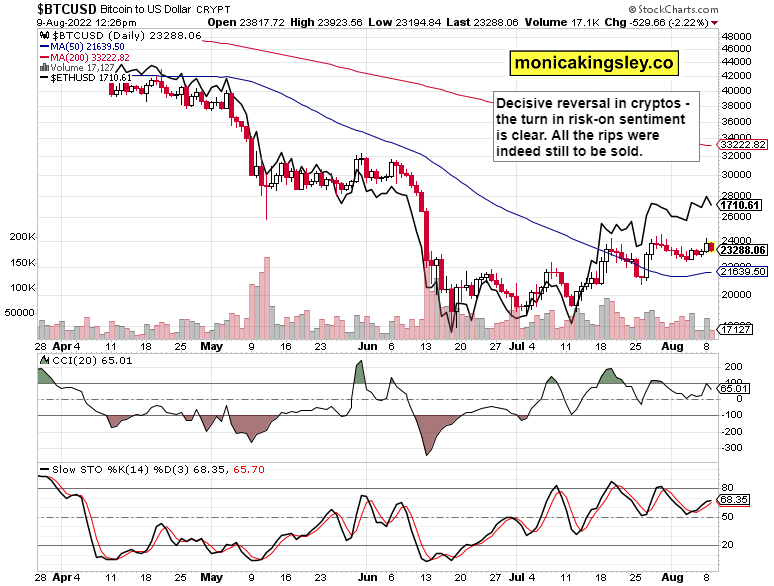 Cryptos are clearly reversing, and that‘s a good sign for those betting on a bearish resolution of tomrorow‘s inflation data overall.