Outlook: The calendar contains little to drive prices and we are getting a calm Tuesday with little pullback so far. In the US, it will be durables today but we have to wait for Thursday to get the eurozone flash CPI and Friday for the US PCE.

As for the eurozone flash CPI, the influential Bloomberg survey has the headline number rising to 9.7% (from 9.1% in Aug) and the core rising to 4.7% (from 4.3%). For what it’s worth, the US is expected to get a gain, too. All the same, traders are likely to become jittery and defensive ahead of the numbers.

US durables may disappoint more than expected. Remember, it was flat in July over June (which has posted a 2.2% gain). The consensus forecast is for a 0.4% drop for August, but Trading Economics’ own forecast is more than double that, -0.9%. We also get the Conference Board consumer confidence index and the Richmond Fed manufacturing survey today (the last of the regional Feds, all down so far), and while the market likes the Conference Board, we find it less than credible and/or instructive. Also due is new home sales, and we know that’s going to disappoint, in part because of rising mortgage rates but also tight supply.

The real problem in the FX market today is the dollar–it’s just too darn strong. Bloomberg reports an ex-official from the PBOC says the Fed hiking and resulting strong dollar endangers global financial stability and other economies. For sterling, Bloomberg reports it’s not just betting against the new fiscal stance but also pro-dollar attitudes: “Speculators are betting there's worse to come, with option markets implying a 43% chance the pound will hit parity with the dollar before the end of the year.”

Following essays declaring the world’s central banks need to start coordinating with one another (who says they are not?), we are starting to get questions about coordinated intervention in FX. Forget it. We had that once back in the 1980’s and it failed miserably, mostly because governments can’t make decisions for “independent” central banks. Go look up the Louvre Accord. Former Fed chief Volcker wrote a whole book about it.

Finally, in addition, while data continues to dribble in, traders are fairly well preoccupied with global political developments, most of which contribute to a rise in risk aversion and thus a tailwind for the dollar (and Swiss franc). The hijab riots in Iran are not likely to result in anything other than more crackdowns and the nuclear deal is all but dead. The same crackdown is expected in Russia for protesters of last week’s military conscription, with Putin’s threat of something nuclear not so improbable considering his weakened condition. And China continues to rattle sabres over Taiwan and N. Korea keeps firing missiles hither and yon. Even the Brazilian election next weekend is accompanied by violence and Trump-ish talk of fraud. The Economist recently ran a cover story on Bolsonaro copying Trump. The most recent poll has Lula ahead, but he’s no prince, either.

Tidbit: About that new Italian government, the market is not sure what to make of it. It’s not nice to say it will stop criticizing the EU because it likes the color of its money, but to be fair, much of the criticism is all too accurate (the scaffolding at the Brussels Palais de Justice is about 40 years old, reflecting the speed at which things get done…). And as for restricting migration, Italy is hardly alone, and to be fair again, the Italians are historically the most generous and non-racist in Europe. Go to YouTube and search for “Italian coast guard rescuing migrants” and you get many heart-warming videos. Not so for other countries, including the US.

But Washington is frowny about incoming PM Meloni because she has aligned herself tightly with the Trump crowd. Her English at conservative events in the US is very good and she’s buddying up to people like the toxic Bannon, and in Europe, Hungary’s Orban. American TV is riled up with history quickies about Mussolini, whose March on Rome will have its 100th anniversary next month. A trend toward autocracy is something to fear.

While regular folks are talking politics, the bond market is not terribly unhappy. Yesterday it was 238 bp, from 230 on Friday and 229 on 9/21. It had been 250 on June 14. One report this morning has it back to 255 bp. Of course, it was 110 last year, so it’s still more than double, but not crisis conditions. ECB promises of support seem to be working as designed.

Flash-Crash Talk: On the political front, disdain for the new PM and Chancellor in the UK was horribly overdone and sterling bounced back by more than it had fallen, although bond yield remain in the stratosphere. We await some rebuttals. Meanwhile, Wolf Street has a dandy summary: “In the UK bond market, the bond vigilantes have come back to life with a vengeance after the new government announced a massive package of tax cuts for the rich (by scrapping the top income tax rate and cancelling an increase in corporate taxes, in the classic form of trickle-down economics) accompanied by a surge in spending due to very expensive energy subsidies for businesses and households. While inflation is already raging at around 10%. 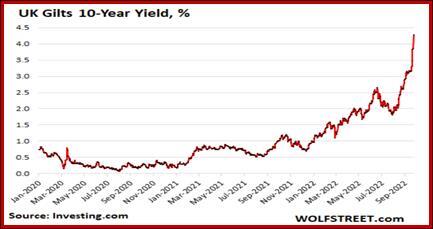 For its part, the BoE said “The role of monetary policy is to ensure that demand does not get ahead of supply in a way that leads to more inflation over the medium term. As the MPC [the BoE’s Monetary Policy Committee] has made clear, it will make a full assessment at its next scheduled meeting of the impact on demand and inflation from the Government’s announcements, and the fall in sterling, and act accordingly. The MPC will not hesitate to change interest rates by as much as needed to return inflation to the 2% target sustainably in the medium term, in line with its remit.”

A lot of information lies in that statement. First, to Kwarteng, “Bring it on.” Second, to the market clamoring for more rate hikes, “Buzz off; we know what we are doing. Third, to those clamoring for an emergency hike in response, “No. We will meet on schedule.”

This is one of those times the currency did not follow yield step for step. If we assume the BoE is going to keep hiking–which it was going to do regardless of Treasury’s fiscal plans–we probably have to attribute at least some sterling’s recovery to above the level where it fell off the cliff to the BoE’s intentions. Here’s the data: at 1:30 on Sunday, before the Chancellor spoke, sterling was quoted at 1.0856. By 9:30 pm, it had fallen to 1.0349. It then made a fairly straightline recovery to 1.0931 by 8:30 Monday morning (all times New York). It then slithered back down, presumably on profit-taking, to close in NY around 1.0706. This is below where it started when Kwarteng spooked the market, but not at all bad, and possibly revealing that there is some manipulation going on. By manipulation, I mean chatter into an environment already steamed up and prepared to hear whispers of catastrophe, plus some big shorts that everyone saw, including especially the algo traders. This is pure bandwagon effect in quick-step.

Our understanding of the cause and process of flash crashes is depressingly simple. For example, the 2010 flash crash in US equities was caused by a single guy in his bedroom in London who set off the algos, causing the Dow to lose about $1 trillion in a few hours, although it recovered 70% by end of day. The guy was a lone rogue and yes, he was “spoofing,” i.e., placing enormous orders but cancelling at the last minute. The funny/sad part if that he was not arrested until five years later and not sentenced until five years after that–one year of house arrest. Meanwhile, regulators got busy inventing circuit breakers and other precautions, but there is nothing to say something very similar did not happen here. At a guess, this is the tip of an iceberg.

And there’s nothing here that helps figure out whither now for the pound? Indicators are point downward, and for all we know, we will revisit the new low at 1.0349. There is talk of parity with the dollar. Well, we heard of the euro going to parity with the dollar before it happened, too–but that one took a war and an energy crisis to pull off. Granted, the UK is participating in the European effort for Ukraine and has an energy crisis itself, but somehow it seems so much worse closer to the front. Like Germany.