Though the roots were laid in the 1700’s up to around 1800 Europe did not appear to have a significant economic lead over other regions but during the course of the 19th  Century the differential multiplied. The industrial revolution began in England and the Low Countries and allowed for increases in productivity of multiples of tens and hundreds such that their economies took off. At the same time the penetration of manufactured products into the internal markets of countries in Asia such as China, India and Indonesia caused their domestic production to collapse and their economies to enter into downward spirals. Thus the world economy became tilted towards the West.

The developing world then needed to emulate the West by inducing it’s own industrial revolutions and this has occurred with varying degrees of success in different countries. The first priority was to regain control of the domestic market by blocking manufactured imports and only importing those which served development goals such as raw materials and machinery. The next part involved a commercial strategy regarding the industrialisation process. There were various models but there is now a consensus among economists of the success of the East Asian model. Then there were the political and social institutions required to support a modern society.

A key question for all countries was the acquisition of scientific and engineering expertise in order to be able to replicate the advanced countries. This on it’s own was  insufficient as the case of the Soviet block shows – without the proper institutions the investment would be wasted. However let’s look at where the countries of the world are now in terms of technical expertise. 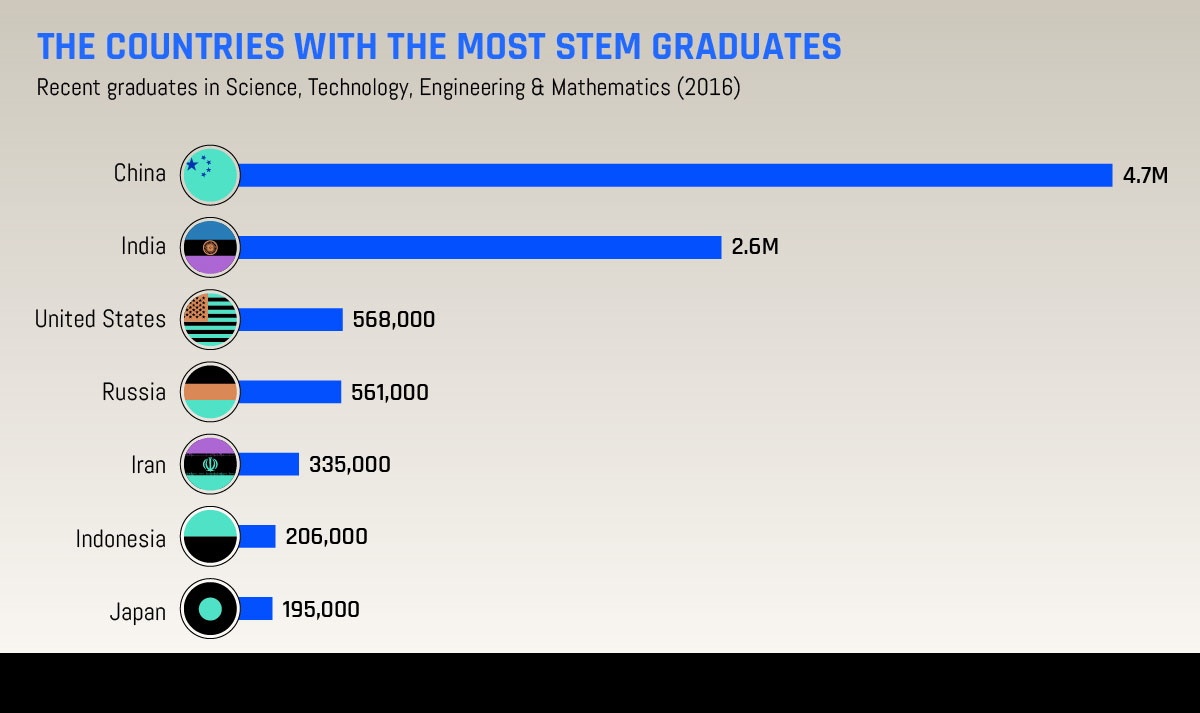 This chart shows that China and India are way out in front in terms of Science and Engineering graduates. These are, of course, just raw data but how do they compare in terms of quality – we have the following data for higher education from the World Economic Forum:

Sweden is an advanced industrialised country with a rank of 46 on this table so if we take this as our reference point we can make the following observations:

(i) Latin American countries rank consistently near the bottom as do Turkey and Egypt - though it is worth noting that this is an average of all courses and does not exclude pockets of excellence.

This data tells us that the quality of engineering and science graduates in China, India and other developing countries is not dissimilar to Sweden or South Korea. Now the next question is whether they are gainfully employed. It is one thing to produce graduates and another to for them to find opportunities where their skills and training are used productively.

This depends on a country’s institutions, it’s ability to mobilise the State to promote development and the commercial orientation of it’s enterprises.  The developing Asian countries in the above table all have vast construction programmes which their engineers support with their problem solving skills. In terms of industrialisation there are significant differences but it should be noted that most of the larger countries manufacture foreign brands under license if they do not have their own brands and use that expertise to leverage their own capacities. Also software is perhaps the most accessible of all fields since it only requires a laptop and the necessary expertise to be a developer.

In the long run it will be the ability to problem solve that determines a country’s standing and the time when the West had an unassailable lead is gone. The numbers of STEM graduates shown in the first chart is an indicator of where the weight of the world economy will lie in the 21st century.