Outlook: The big news this week, or rather the Big Hint, is the Fed policy meeting on Tuesday/Wednesday. Also Wednesday is the Biden meeting with Putin, and Canada reports CPI. In the US, tomorrow’s retail sales might be interesting.

The FOMC may address tapering directly or indirectly, but everyone is fairly sure we don’t yet have “substantial further progress” on the jobs front, even if the Fed has convinced market players that the inflation bump really is only temporary. A point of contention—the Fed expects tapering to take all of next year with no hike until 2023, something the market almost certainly sees as needing to be accelerated.

A modification to the Fed’s thinking on jobs may come from some new demographics. The Dallas Fed reports that maybe it’s okay if some of those 7.6 million lost jobs never do come back, since the pace of retirements has speeded up. The WSJ reports “Roughly 2.6 million people have retired since February 2020, according to the Dallas Fed. As the population ages, more workers will become retirees, holding down the number of workers available to take new jobs. The evolving situation means Fed officials may be willing to end some of their pandemic-related asset purchases earlier than expected.”

The dollar was a winner in recent days as it follows several narratives, including relative bond yields but also “confidence in institutions” as well as most economic fundamentals. Over long periods of time, growth is a decent predictor of a currency’s level. So what happened to the endless dollar decline? Some of it is short-covering ahead of important data and now the Fed. Some of it is dismissal of the too-much-debt narrative. Some of it is a really very good vaccination program. Some of it is likely a vote of confidence in the US political system for having gotten rid of the erratic and incompetent previous president.

The question is whether it’s a temporary correction or a harbinger of more to come. The postponement of the UK lockdown ending may be a test, but the UK has a strong backboard in the form of a high percentage already vaccinated. One of the mysteries of the latest currency moves is the emerging markets. Today the Turkish lira benefited from good trade numbers and Erdogan possibly pulling in his horns, but on the whole, EM’s have moved in mysterious ways of late and refused to rally as they “should” on commodities and overall global recovery. Bottom line, there’s a fair amount of doubt about the story of the endlessly depreciating dollar. One story having some plausibility is the dollar gaining a bit against the Chinese yuan, as China grapples with numerous credit issues. We would not say the USD/CNY “leads” anything, but keep an eye peeled and don’t bet the ranch against the dollar.

Tidbit: A little more about inflation: Bloomberg reports that most of the inflation in last week’s reports derives from “transportation.” See the chart. This is a little too slick. It works only if you forget that “transportation” means mostly gasoline of various stripes, including diesel and jet fuel. We’d like to see a chart showing utility bills for homeowners and businesses. In Virginia, bills are up about 30% y/y.

Tidbit: Pres Biden declares “America is back at the table.” The rest of the world seems to agree. World perception of the US presidency and the US overall has reversed from deeply negative to highly positive on the transition from Trump to Biden. Last week Pew Research polled the public in 16 countries and found 75% have confidence in Biden, vs. 17% having confidence in Trump. Those seeing the US favorably went from 34% under Trump to 62% under Biden. It seems foreigners are better eaducated and wiser about politicians than in the US.

France went from a 31% favorability rating last year in attitude toward the US to 65% now. Improvements of 25 percentage points or more are also found in Germany, Japan, Italy, the Netherlands and Canada. But two countries are not convinced (Australia, 49% favorable to 48% unfavorable) and New Zealand (55% unfavorable to 42% favorable).

The Pew study has a lot more detail. The public in the polled countries trust Merkel more than Biden, for example. The US is more a “mostly” reliable partner and not a fully reliable one. Most countries think US democracy is not actually working very well—in Canada, it’s 60% but it’s also 59% in Sweden, 65% in Australia and 69% in New Zealand. But everyone thinks their country’s relations with the US will get better.

You can bet your bottom dollar that the White House and State Dept are studying this survey with a magnifying glass.

Tidbit: The Economist has a long article on how Europe is falling behind the US in big company capitalization and other metrics. “In 2000 nearly a third of the combined value of the world’s 1,000 biggest listed firms was in Europe, and a quarter of their profits. In just 20 years those figures have fallen by almost half. Europe is a place for companies such as Amazon and TikTok to find customers, not a base for local firms to conquer the world…. It is the ascent of Asia that has rejigged the global corporate landscape. China’s rapid economic growth has spawned corporate titans to match. Over 160 of the world’s 1,000 most valuable firms are now Chinese, a fourfold rise in two decades.”

But there’s something else, too. “In Europe old names prevail. Of the world’s 142 listed firms worth over $100bn, 43 were set up from scratch in the past half-century, 27 in America and ten in China. Only one was in Europe: SAP, a German software group founded in 1972. Half of Europe’s richest ten billionaires inherited fortunes spawned long ago; in America nine of the top ten are wealthy solely because of companies they founded.”

The article contains some trenchant remarks about management and government involvement, but these are the charts that grab you and won’t let go. But then this morning the WSJ has a story on Italian coffee-maker Illy bringing in an American partner to expand in the US, thank goodness. 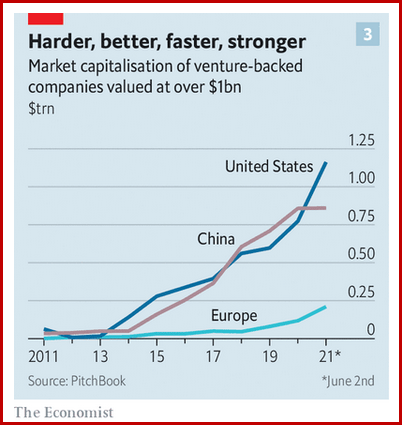 EUR/USD is trading closer to 1.1850, down on the day, as Monday's concerns about slower growth following the disappointing ISM Manufacturing PMI have spilled over to Tuesday. The risk-off mood, also backed by rising US covid cases, is boosting the safe-haven dollar.

GBP/USD is trading around 1.39, little changed, as UK covid cases extend their drop toward 20,000. The broader market mood is also calmer despite growth worries.