This week is jam-packed with events, many of which can morph into Events. There's not much today (the Chicago Fed index) but tomorrow the IMF updates its World Economic Outlook. It is likely to slam Trump again for making a mess in trade and damaging global growth.

After new home sales and durables this week, the biggie will be the first estimate of Q2 GDP. We know the Fed has a generic 1.9%. The Atlanta Fed had 1.6% last week and the NY Fed had 1.41% on Friday. Remember it was a whopping 3.1% in Q1 and Q2 can't come close to that. While we wait, about a quarter of the S&P reports earnings. We also get dozens and dozens of important earnings reports, from Coca-Cola, Harley-Davidson, Lockheed Martin, 3M, Alphabet and Amazon, and Colgate Palmolive to ... Twitter.

On Friday, the stock market didn't like the retreat from 50 bp it thought the Fed might go for, but in practice, one sector gets hit the most no matter whether the Fed cut is 25 or 50 bp--the banks. The WSJ reports mortgage servicing is already getting slammed. And some imagine US rates can go to zero or negative, which is analytically like a tax on the banks (which is why Trump wouldn't mind having it to punish the banks who refused to lend to him).

Before GDP, the ECB policy meeting may be a key event. Or not. Most analysts think the ECB will politely wait until the Fed goes first, and also until it has its newest economic forecasts (due in September). The ECB will either do the deed or plow the ground for action in September.

See the chart showing relative rates in the US, Asia and Europe. A fuller selection would show everybody cutting or about to cut. So far this year we have had cuts in Australia, New Zealand, India, Malaysia, the Philippines. South Korea, Indonesia and South Africa. Turkey and Russia are up for cuts this week. It's a synchronized global rate cutting supposedly to match the global slowdown, but it can also be seen as a global currency war. If all the major countries had the same interest rate, the only reason to prefer one currency over another would be the economic growth (and inflation) outlook. Or maybe a safe-haven in storm, like the Swiss franc. 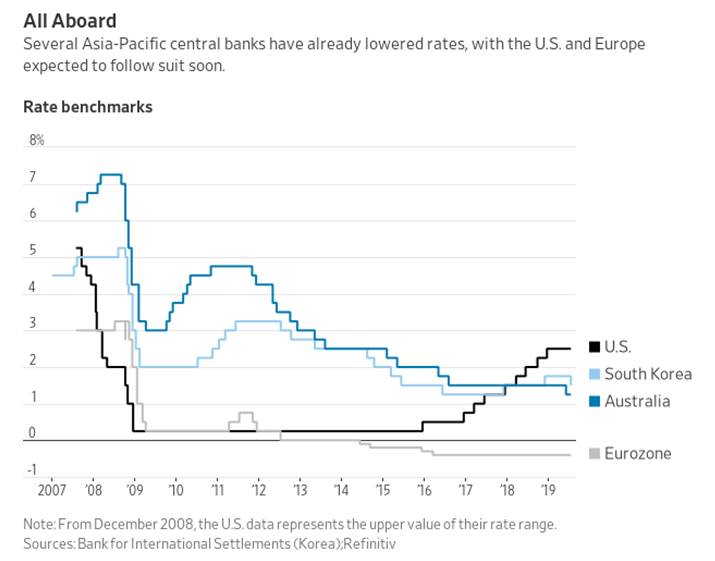 The FT writes that the SNB really would prefer to intervene to prevent the Swiss franc getting so strong but fears the wrath of Donald. The franc "is already trading at its strongest level against the euro in two years. Rate cuts from other heavy-hitting central banks would be likely to generate even more inflows. Despite having some of the most deeply negative interest rates in the world at minus 0.75 per cent, the franc is ‘poised to be one of the key beneficiaries' from the global shift to rate cuts, in the words of JPMorgan analysts. Swiss policymakers could choose to put up with a strong franc, or they might cut rates further into negative territory at the next meeting in September. Another option is to follow through on their perennial threat to intervene, something the central bank last did especially heavily in the depths of the eurozone debt crisis." We'd guess the Swiss look down on Trump with great disdain and will do whatever the hell they want to, probably more negative rates rather than intervention (because it's expensive and the public doesn't like it), but not one bit fearful of intervening. 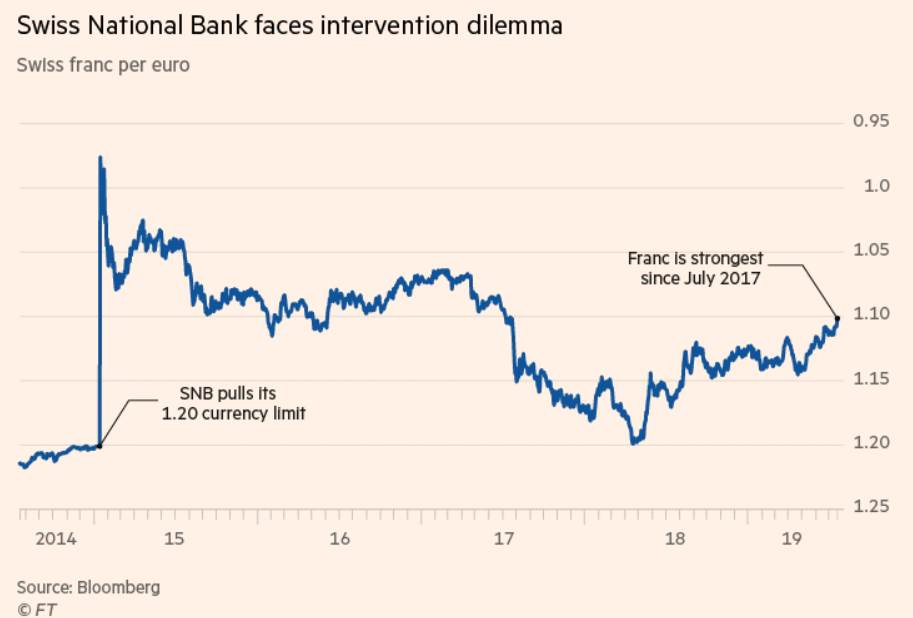 Off on the back burner is a clash between the UK and Iran—the UK getting its comeuppance for over a century of neo-colonial behavior—which is not actually moving the price of oil all that much. We have some peace offerings from China to Trump, maybe, but nobody can give a status report on the supposedly upcoming trade talks.

In a nutshell, the world is loud and messy these days. We think the Fed story is the central thing to get an eye on, but news can come from left field at any moment and re-arrange all our assumptions. For the moment we see divergence between the dollar index components—sterling and the euro down but the N. American currencies and yen up. We'd say now is a good time to cut exposure to everything and get behind the dike.

Tidbit: Steve Bannon may be a repulsive guy, but he's a smart one. Here's a comment from a few years ago: "The Democrats, the longer they talk about identity politics, I got ‘em. I want them to talk about racism every day. If the left is focused on race and identity, and we go with economic nationalism, we can crush the Democrats." From the August 16 [2016?] exit interview with Robert Kuttner in The American Prospect.